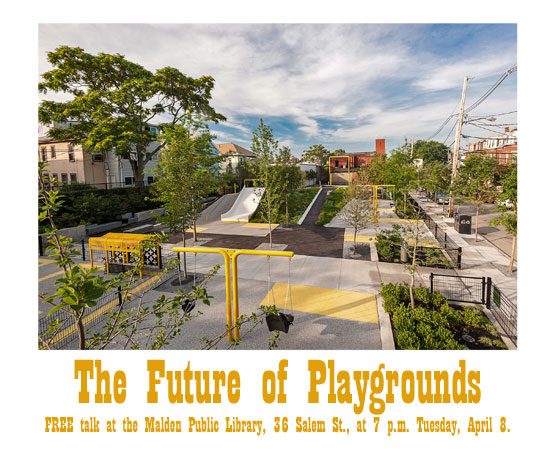 The Boston area has become a hotbed for innovation in playground design and our speakers for the free talk, “The Future of Playgrounds,” are at the forefront of that movement.

Eden Dutcher and Kirk Hiatt of the Somerville landscape architecture firm GroundView will speak about their design for Somerville’s Chuckie Harris Park (photo above by Christian Phillips), which opened in 2013 and reimagined a traditional playground model by dispersing custom play elements throughout sculpted, vegetated terrain.

Cambridge builder and sculptor Mitch Ryerson has become a go-to guy for bringing such new designs to life. He’ll talk about the custom play structures he’s created for the Kemp Playground at Cambridge Common, the Stoneman Playground on the Boston Esplanade, and other landmark new playgrounds.

The discussion begins at 7 p.m. Tuesday, April 8, at the Malden Public Library, 36 Salem St., Malden, Mass. Admission is Free. It will be followed at 8 p.m. by a tour of the library’s Converse Memorial Building art galleries with art curator Marysara Naczi.

The talk is part of “Quiet, Please,” a monthly series at the Malden Public Library about arts, cultures and other interesting things. It’s hosted by Greg Cook of Malden, an arts reporter for WBUR.org and The Providence Phoenix newspaper.

Other news from GregCookland:
• “How to Build a Great City Hall,” the next talk in the “Quiet, Please” speaker series, will feature David Hancock, Nick Brooks and Aaron Helfand discussing architecture and Malden’s plans to build a new city hall. The event will be at the Malden Public Library at 6:30 p.m. Tuesday, May 13.
• Check out photos of last Sad-urday’s “Saddest Parade on Earth” in Beverly, Massachusetts. Many thanks to everyone who took part. It was a great honor to have you join me in the sad. My related “Saddest Forest on Earth” installation is on view at Montserrat College of Art’s Frame 301 Gallery, 301 Cabot St., Beverly, through April 18. I’ll also be speaking about “Remaking Our Sad World: What Can You Accomplish with Art, Community Activism and World-Building?,” at 11:30 a.m. Monday, April 14, in room 201 of Montserrat’s Hardie Building, 23 Essex St, Beverly.
• I’ll be helping moderate “In-Sight Evening: Preparing for the New Harvard Art Museums, Part IV,” a talk about the role of university museums at Harvard’s Arthur M. Sackler Museum lecture hall, 485 Broadway, Cambridge, Massachusetts at 6 p.m. Wednesday, April 9.
• Jasper Percival Cook’s drawing is included in the “Envelope Art Show” at Montserrat College of Art’s library, 23 Essex St., Beverly, Massachusetts, though at least the end of April.
• Kari Percival will be exhibiting her art in the “Appearances Eco-Arts Festival” at the Dunes’ Edge campgrounds in Provincetown from April 18 to 27.