Note: Nonrequired travel between New England states is not recommended during the coronavirus pandemic. As of April 5, the state of Connecticut was warning: “Travelers: Any person coming into Connecticut by any mode of transportation for any reason is strongly urged to self-quarantine for 14 days.” This is on top of the the Connecticut Department of Energy and Environmental Protection‘s announcement by March 23, 2020, that “the trails and grounds of Connecticut State Parks and Forests are open for solitary outdoor enjoyment. If you plan to visit a park, it should be for solitary recreation, not group activities.”

An article from Wonderland’s series about Miserable Places:

They say the name Mount Misery comes from the lousy farming conditions English colonists found when they settled Voluntown, Connecticut, in the early 1700s. Now the 441-foot-tall rise in Pachaug State Forest—at the eastern end of the state, just over the border from Rhode Island—is recommended as a pleasant place for viewing fall foliage or to stop on your way to the nearby Rhododendron Sanctuary Trail, which blooms spectacularly in June and July.

“It’s the most popular trail in the Pachaug,” David Lees of Norwich, a retired computer programmer who maintains the blue-blazed Pachaug Trail that leads to Mount Misery, told New London’s The Day newspaper in 2010.

The mild climb from the trailhead at Cutoff Road through pitch pines, white pines and highbush blueberries to the top of Misery takes about a half-hour. The rocky rise offers an okay view of oak, maple, white pine, red and white cedar, and eastern hemlock forest—all the way to Rhode Island.

When English colonists arrived, the forest was tribal land of the Narragansett, Pequot, and Mohegan peoples. The name Pachaug—of the forest and the Pachaug River that winds through it—is said to come from a Native American term meaning bend or turn in the river.

As English settlers encroached on indigenous land, disputes arose that eventually sparked an uprising in 1675. Wampanoag, Nipmuck, Pocumtuck and Narragansett tribes hoped to drive the English out. They were led by Wampanoag Sachem Metacom (also known as Metacomet or King Philip, the name given to him by the English). He was the son of Massasoit, the Wampanoag leader who had supported the Plymouth “pilgrims” when they first arrived.

King Philip’s War, as the English called it, lasted 14 months, with devastating fighting, raids on settlements, and destruction of crops. Members of the Mohegan, Pequot and Nauset tribes sided with the English. Fighting ended in August 1676 when Metacom was cornered and killed at Mount Hope in Rhode Island. The English colonists captured his wife and a 9-year-old and sold them into slavery in the West Indies.

In October, 1696, Lieutenant Thomas Leffingwell of Norwich and Sergeant John Frink of Stonington appealed to the colonial government “that they, with the rest of the English volunteers in the former wars, might have a plantation granted to them,” Ellen D. Larned reported in her 1874 “History of Winham County, Connecticut.” In 1700, the English war veterans were granted six square miles “to be taken up out of some of the conquered land,” roughly 11 miles east of Norwich, Connecticut, and 22 miles from Providence. They called it Volunteers’ Town, which was condensed to Voluntown, as it was incorporated in 1721. Settlers came mostly from Norwich, New London and Stonington. “Swamps, rocks and poor soil made the area not very attractive,” according to the Voluntown Historical Society.

Still, “old cellar holes and miles of stone fence winding through the woods give evidence that the entire forest was once farmed or pastured,” the Connecticut Department of Energy and Environmental Protection reports. “Abundant water encouraged the establishment of a mill industry as early as 1711. Nearly every brook has several old mill sites and dams. Homestead farming and small industry succumbed to advancing modern technology; eventually, the forest reclaimed its land.”

Pachaug State Forest was established in 1928 with a 1,011-acre land purchase from the Briggs Manufacturing Co. in Voluntown. Briggs had begun operations as a river-powered cotton mill in 1856 and remained the town’s major employer into the next century. But “owing to the depression in the cotton industry,” the company ceased operations in 1926 and sold its assets.

Through numerous fundraising efforts, the forest grew to 12,000 acres by 1937. The Connecticut Department of Energy and Environmental Protection says, “The actions of the Resettlement Administration, in 1937, acquired an additional 9,000 acres and leased the land to the state for forest production. Eventually, this land was deeded to the state.”

Previously: The View From Mount Misery in Lincoln, Massachusetts 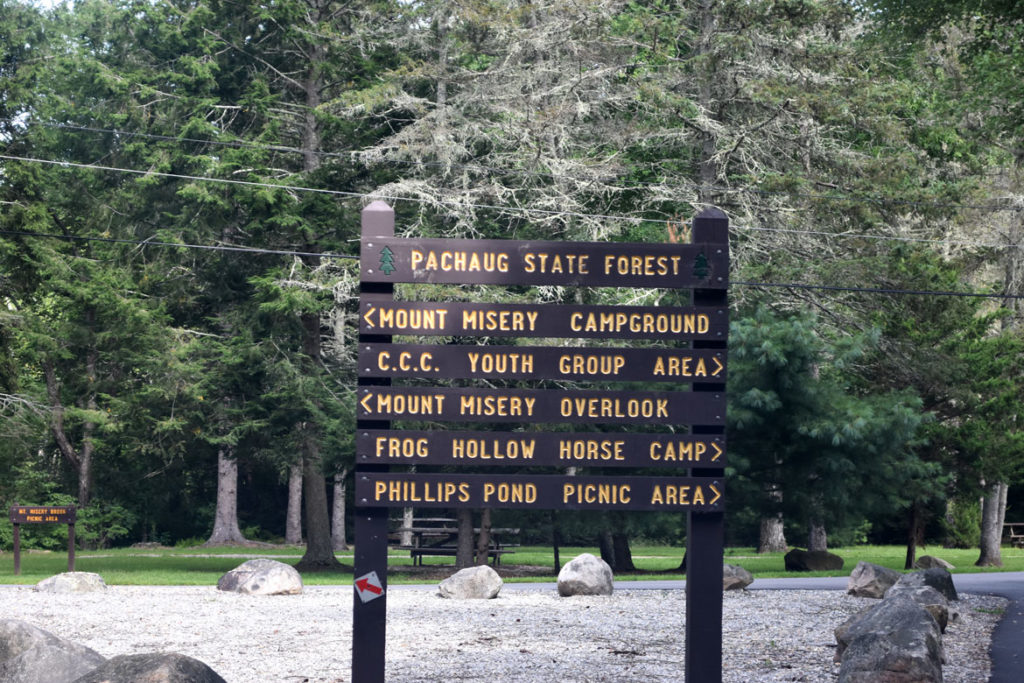