Families of fox and bears and deer meander around the brick exterior of Arlington’s Fox Library in Eileen de Rosas’s temporary mural, which went up in December. A school of alewife swims across the end of the wall.

“These animals are part of where we are. They are using the streets just like we are,” says the Arlington artist, who painted watercolors of the animals, turned them into black-and-white posters, then glued them to the walls of the Massachusetts Avenue library with wheatpaste. “So they’re here and they kind of live parallel lives. So the thought is to acknowledge that they’re part of our lives.”

It’s one of the creative projects that have been appearing in the town from Arlington Public Art. “There are consistent themes of urban nature, community and playfulness that I hope both reflect and engage the people who live, work and visit the town,” says Cecily Miller, since 2015 the curator for the organization, which is a committee of the Arlington Commission for Arts and Culture. “I’m both responding to and, I hope, strengthening the identity of the town as a place where people care about the environment, being good neighbors, and getting involved in civic life.”

“Colony,” a suite of mini white buildings by Somerville artist Chris Frost and his daughter Basil, has ringed a tree along the Minuteman Bikeway at Linwood Street since last September. It’s expected to stay there about a year.

In October, James Weinberg of Somerville painted a mural depicting a fox, deer, bird and turtle at the woodsy edge of a residential neighborhood. Located on the side of Za Restaurant on Massachusetts Avenue at Milton Street, the mural was part of the Bus Rapid Transit (BRT) Pilot, an initiative to encourage increased use of public transportation along Massachusetts Avenue. Weinberg, de Rosas, Johnny Lapham, Sneha Shrestha (aka Imagine), Claudia Ravaschiere and Mike Moss created temporary art for five bus shelters there as part of the transit initiative.

Other projects have included a summer Fox Festival Parade (my partner Kari Percival and I have helped with that), yarn-bombing trees along the bike path, and temporary, 2016 wheatpaste mural on the Fox Library exterior by Cedric Douglas, Julia Roth and Nilou Moochhala.

“ExtraOrdinary Birds” are a series of printed cards (to take home) about local birds—black capped chickadee, northern cardinal, yellow rumped warbler, belted king fisher, eastern screech owl and downey woodpecker. Based on paintings by Resa Blatman and texts by environmental educator Ellen Reed, you can find them along the Minuteman Bikeway. So far two dispensers have been installed. Four more are planned.

More projects are planned for the rest of 2019, including additional projects along the bike path—including more of the haiku that were temporary painted with chalk along the roadway last fall—and another Fox Festival on June 15. 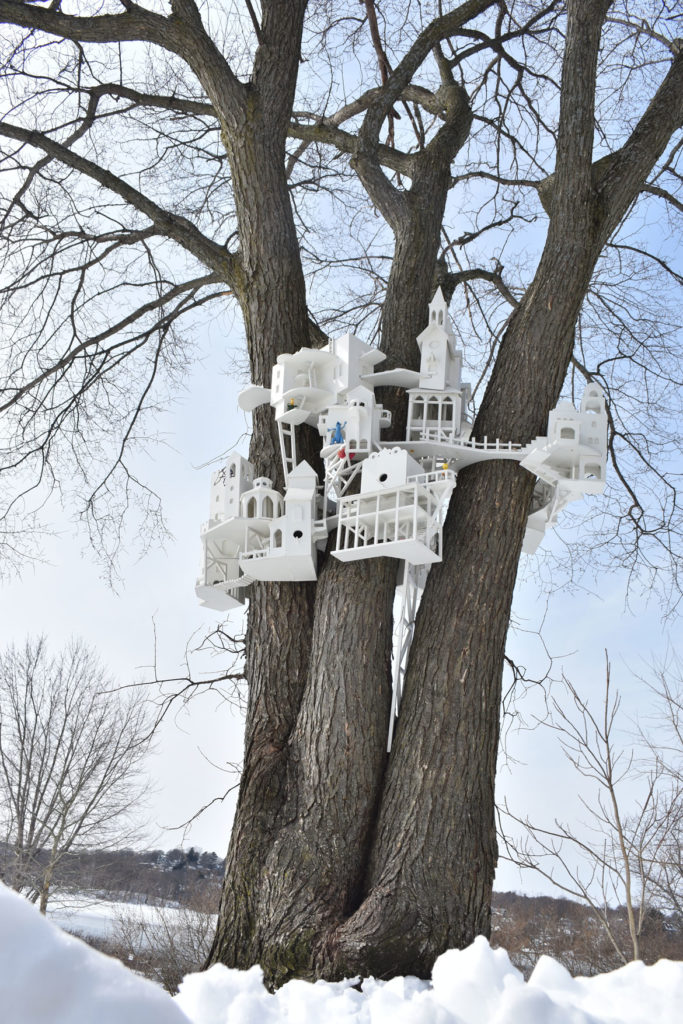