Nearly 200 objects tell the little-known stories of empresses in shaping the politics, art and religion of China’s last dynasty, the Qing dynasty, from 1644 to 1912.

Visionary art by some of the best of the 20th century—including Thornton Dial, Bessie Harvey, William L. Hawkins, Mary T. Smith, Jimmy Lee Sudduth, and Purvis Young—drawn from a recent gift to the university.

“Museum of Capitalism” at School of the Museum of Fine Arts at Tufts, Boston, Aug. 29 to Oct. 25

The “Museum” is a project of Oakland, California, curators Timothy Furstnau and Andrea Steves to imagine the end of capitalism with exhibitions and talks exploring “the ideology, history, and legacy of capitalism.” Its first exhibition was in Oakland a year ago. Here they round up artworks on the theme, plus talks on capitalism on Sept. 14 and housing in Boston on Oct. 16. 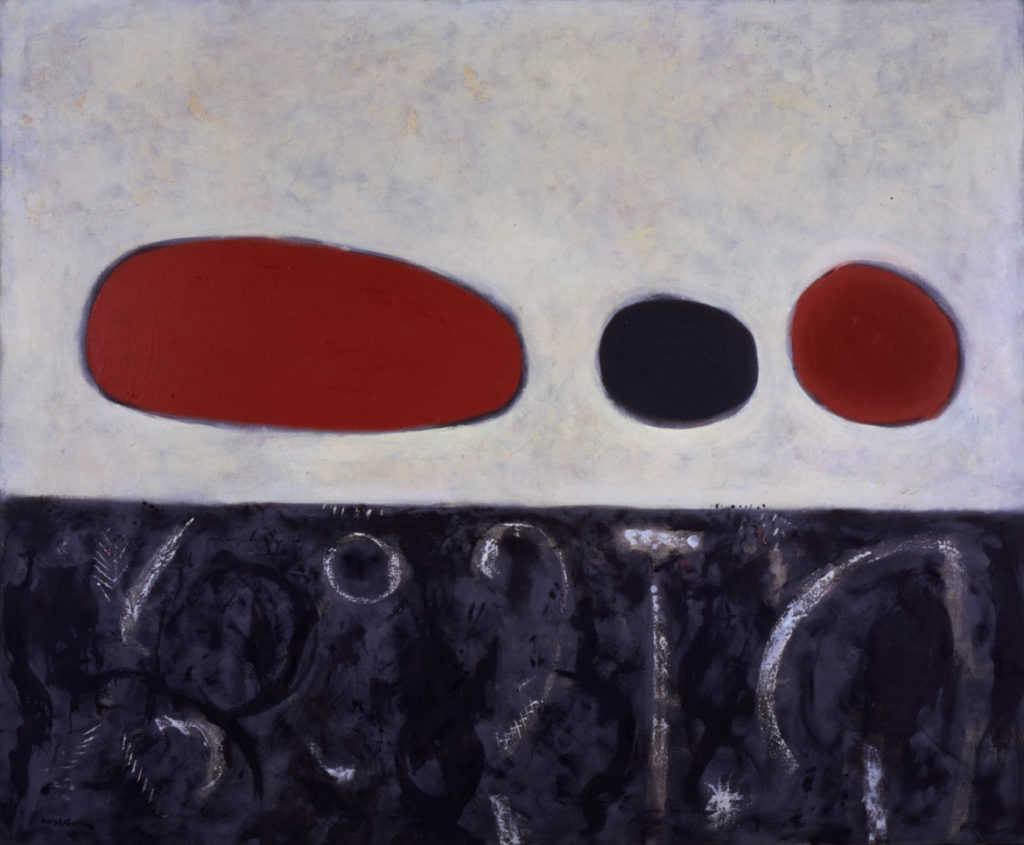 Gottlieb (1903-1974) was one of the leading pioneers of New York School Abstract Expressionism. This exhibition spans the years 1946 to 1957, plumbing works on paper and small oil paintings from his 1940s “Pictographs” to his 1950s “Burst” paintings that he made while summering in Provincetown.

A showcase of artists sometimes affiliated with the effervescent, transcendental minimalism of California’s “Light & Space” movement of the 1960s, including Fred Eversley and De Wain Valentine, plus some artists they inspired.

Harvard brings together nearly 60 drinking vessels shaped like animals—a winged lion from Iran, a donkey from Greece, a ram from Persia, a duck from China—to offer “a glimpse into the rich symbolism and communal practices that found expression” at ancient feasts.

A three-decade survey of photos, videos and installations of translucent fabric by Weems “that expose systems of power and injustice.” She speaks at the school on Sept. 10.

A look at art challenging archetypes of identity, gender and community that emerged from Boston in the late 1970s and ‘80s by Nan Goldin, Mark Morrisroe, Shellburne Thurber and others affiliated with what became known as “the Boston School” and the photography, video, and performance by other local artists (Dead Art Star, Melanie Bernier, Steve Locke, Suara Welitoff) following along that path since.

The New York artist riffs on the history of transgender-feminist protest banners and how science-fiction novels imagine alternative ways of living.

Published in 1969, Carle’s iconic children’s book continues to delight, while also being a landmark example of turning a book into an interactive object.

A survey of 40 landscape paintings from 1818 to 1886 by artists who became known as the Hudson River School for their romantic artistic explorations of upstate New York and the wilds of New England, artworks that both celebrated the expanding colonization of the Northeast and ached with nostalgia for an imagined pure, wild place they feared had gone by.

“From Starfield to MARS: Paul Manship and His Artistic Legacy” at Addison Gallery, Andover, Massachusetts, Sept. 15 to Jan. 20

Sleek art deco sculptures, models and studies by Manship (1885-1966) as well as photos by contemporary artists—Barbara Bosworth, Justin Kimball, S. Billie Mandle and Abelardo Morell—of the artist’s summer house and studio in Gloucester, which is beginning to host artists-in-residence.

The Boston artist, best known for his monumental drawings like one he drew on the wall of the lobby at Boston’s Institute of Contemporary Art in 2016, will draw a mural in the museum “inspired by the history of the Manchester region and its people, emphasizing labor and collaboration.”

In the winter of 1903, shortly after the Gardner Museum first opened to the public, the dashing society portraitist John Singer Sargent used the museum’s Gothic Room as his studio to paint one of Gardner’s dear friends, Gretchen Osgood Warren, and her daughter Rachel. This exhibition returns the painting—now in the collection of Boston’s Museum of Fine Arts—to the room where it was painted and tells its story with archival material.

Kay Sage (1898-1963) made her mark with paintings of unsettlingly empty, surrealist landscapes. This show recreates her inaugural 1950 exhibition with the Catherine Viviano Gallery in New York, reassembling all 12 of the extant paintings, marking their first showing as a group since then.

The German artist is best known for her monumental, realist woodcuts about the forces of nature and the power of military force.

“Winnie-the-Pooh: Exploring a Classic” at Museum of Fine Arts, Boston, Sept. 22 to Jan. 6

Nearly 200 original drawings, letters, photographs and early book editions reveal the origins and development of Pooh and his friends from the stories written by A. A. Milne and illustrated by E. H. Shepard.

The Dutch artist turns a 26-foot-long centerpiece—inspired by elegant 19th century European porcelain table decorations—into a battle scene, including a “mushroom cloud from a nuclear explosion whose force appears to have turned the entire table into a wasteland.”

A close examination of darns and patches of Japanese boro garments, Indian Kutch quilts, a Mali hunter’s ensemble and fashionable American clothes “acts as a springboard to considering and discussing the ways in which mending can serve as a visual and emotional aid to socially engaged design thinking.”

“Beyond the Pedestal: Isamu Noguchi and the Borders of Sculpture” at Portland Museum of Art, Portland, Maine, Oct. 5 to Jan. 6

A look at how the American artist (1904-1988) pushed the boundaries of sculpture with his elegant, minimal sculptures, landscape architecture, play structures, monuments, stage sets, interior designs and furniture.

A bronze snake bag, a necklace resembling bones, a breastplate made from guns explore a deliciously unsettling side of fashion today.

A survey of museum and gallery projects from the late American artist (1940–2016) whose output ranged from structural films to minimalist drone music.

A midcareer survey of the New York artist’s spider webs of rope and knitting and crocheting in which she “plays with feminist and craft traditions to counter patriarchal notions of art making.”

The Vermont choreographer—who’s got a five-year residency at the Boston Ballet—provides instructions for how you should move through his interactive sculptures to, together, create a kind of dance.

“Danny Lyon: The Only Thing I Saw Worth Leaving” at Brown University’s Bell Gallery, Providence, Nov. 2 to Dec. 19

Photos from throughout the career of the documentary photographer, who began in the 1960s with landmark series on civil rights activists, prisoners, and outlaw bikers.

Sketches, model books and finished illustrations by the beloved Gloucester children’s book artist Virginia Lee Burton (1909–1968) offer a close look at the development of “Mike Mulligan and His Steam Shovel,” “Katy and the Big Snow” and “The Little House,” her 1943 Caldecott-Medal-wining tale about how encroaching development threatens a country cottage.

“Corncobs to Cosmonauts: Redefining the Holidays in the Soviet Era” at Museum of Russian Icons, Nov. 9 to Jan. 27

After the 1917 Russian revolution, anti-religion Bolsheviks discouraged Christmas and New Year celebrations in the Soviet Union because they believed they represented bourgeois greed and excess. This exhibition of 150 Soviet-era ornaments shows how in the 1930s, New Year’s returned as a secular celebration of the USSR’s achievements from farming to space flight.

Cinematic paintings of cowboys, pirates, arctic adventurers and indigenous peoples by the illustrator (1877-1972) who believed artists should live what they paint—and so explored Alaska and Canada by canoe, snowshoe and dogsled.

Adams’s swooning photos of Yosemite and the Grand Tetons—and his environmental concerns—are put in context by bookending his career between 19th-century government survey photographers who influenced him (Carleton Watkins, Timothy O’Sullivan) and those who followed in his footsteps (Mark Klett, Trevor Paglen, Catherine Opie, Abelardo Morell, Victoria Sambunaris, Binh Danh).

This exhibit explores the “social, cultural, political, and personal significance” of more than 50 landscapes by British painters J. M. W. Turner and John Constable, who were active as the British Empire was at a peak of its power and wealth, as the nation became more urban, and Brits pioneered many of the innovations (and privations) of the Industrial Revolution.