In the woods at the heart of Gloucester lies a ghost town, the remnants of an abandoned English colonial settlement today known as Dogtown. There are a number of ways to find it, walking in along old dirt paths winding through rolling, forested hills. Large granite stones left there, they say, by ice age glaciers murmur of ancient and elemental forces.

“We found ourselves in the midst of boulders scattered over bare hills and fields. … This was the most peculiar scenery of the Cape,” is how Henry David Thoreau described it in his journal when he visited in 1858.

Then you notice that some of the boulders have been carved with words. “Truth.” “Intelligence.” “Help mother.” “Prosperity Follows Service.” “Never try never win.” And the mystery of this peculiar place only deepens.

Dogtown had been used as common land for wood and pasturing cattle and sheep by the 17th century English settlers who clustered their homes southwest of there, near what is now Grant Circle, the first rotary as one drives into Gloucester north along Route 128. Some folks began building homes in Dogtown in the mid 1600s. Then in the early 1700s, the common land there was opened to individual settlement for the community’s expanding population. At one point, perhaps 60 to 80 homes stood there. But after the Revolutionary War, because the sea was safe again from enemy ships, because fishing revived and international shipping arose, Gloucester’s focus shifted to its prized natural harbor. And Dogtown, well inland, fell into decline.

The name Dogtown, which seems to have attached to the settlement after the Revolution, is said to come from the dogs kept for security by poor women who continued to reside there. Though “Dogtown” seems also to have sometimes been an American nickname for impoverished places. Historians say the last Dogtown resident left the area around 1830 and the last house was torn down around 1845. Though parts of the land continued to be used for grazing animals and other commercial purposes into the 20th century.

Then along came Roger Babson (1875-1967), a Gloucester native and 10th generation descendent of some of the first English founders of the community.

“There is something inspiring in the huge barren hills and great boulders of Gloucester’s Dogtown,” he wrote in his 1935 autobiography “Actions and Reactions.” “At the same time, there are pathos and tragedy in the old forsaken cellars of the original inhabitants.”

Babson was a Massachusetts Institute of Technology-trained engineer who founded a financial analysis firm that made him a millionaire. He was one of the first to predict the market crash of 1929 that began the Great Depression. He founded Babson Institute (now Babson College) in Wellesley, Webber College (now Webber International University) in Florida, and Utopia College in Kansas (which closed around 1970). He ran for U.S. president as the National Prohibition Party candidate in 1940, losing to Franklin D. Roosevelt. He founded the Gravity Research Foundation to find ways to counteract (as he described it in an essay) “Gravity — Our Enemy Number One,” which he blamed for the drowning deaths of a sister and a grandson. And he bought up a sizable chunk of Dogtown — donating more than 1,100 acres to the city of Gloucester in the 1930s “as a park and watershed.” (The city has since acquired some 800 additional acres.)

Babson was intrigued by the abandoned settlement and set about trying to identify the sites of the original homes. He believed he found 40 of them, “had a corresponding number carved upon the nearest boulder to each of these old cellars,” and published a 1927 guide called “Dogtown — Gloucester’s Deserted Village.”

But he wasn’t done. “Another thing I have been doing, which I hope will be carried on after my death, is the carving of mottoes on the boulders at Dogtown,” he wrote in his autobiography. “My family says that I am defacing the boulders and disgracing the family with these inscriptions, but the work gives me a lot of satisfaction, fresh air, exercise, and sunshine. I am really trying to write a simple book with words carved in stone instead of on printed paper.”

During the Depression, Babson hired unemployed quarry workers to carve inspirational slogans into the stones. Many of Babson’s slogans reek of the puritanical patronizing of a rich guy during the Depression: “Be on time,” “If work stops values decay,” “Get a job.” Heading south along the path from Dogtown Square, you come upon “Use Your Head,” “Industry,” “Initiative,” “Integrity.” Then on a spur on the east side of the trail, you find one of the largest boulders, rising, perhaps, 20 feet tall. Carved into its face are the words “Spiritual power.”

During the Depression, much of the landscape was open pasture, and the boulders stood out among the grass and low scrub. In the decades since, forest has reclaimed the land, hiding the ghost town and boulders.

If this is the kind of coverage of arts, nature, cultures and activisms you appreciate, please support Wonderland by contributing to Wonderland on Patreon. And sign up for our free, (hopefully) weekly newsletter so that you don’t miss any of our reporting. (All content ©Greg Cook 2021 or the respective creators.) 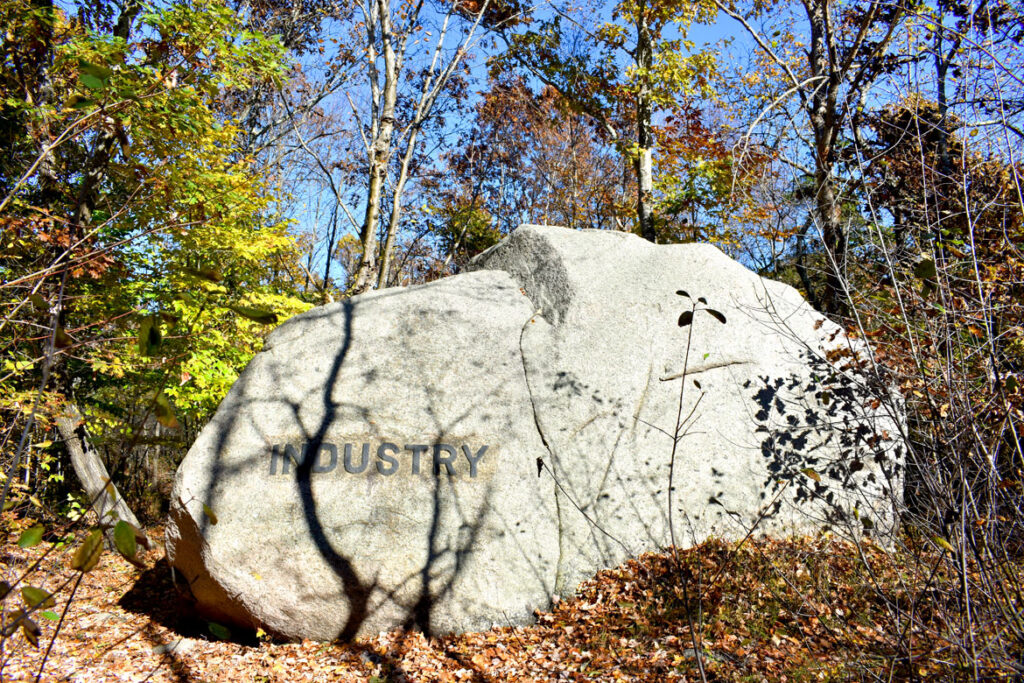