In “Star Wars: The Rise of Skywalker”—the ninth film in the Skywalker family saga launched by George Lucas in 1977—Palpatine (played again by Ian McDiarmid), the crypt creeper emperor, is back from the dead. Despite me having witnessed Darth Vader hurling him to his death in “Return of the Jedi” in 1983 and, in so doing, sacrificing his own life, but redeeming his soul. So much for that.

Supposedly Palpatine has been hiding out on some uncharted planet secretly building the largest fleet of star destroyers ever. And with Kylo Ren (Adam Driver), the gone-to-the-Dark-Side son of Han Solo and Princess Leah, at his side he plans to rule the universe again. I guess this is supposed to be scary, but Palpatine was always a cackling blabbermouth, not holding a candle to the iconic menace of Vader, which leaves films with him at the center lacking a villain’s real threat.

But! Kylo plans to maybe double-cross the decrepit, old baddie and rule everything with his star-crossed soul mate Rey (Daisy Ridley)—even though Palpatine wants him to kill her. (I think. I’m getting a bit confused myself.)

Nevermind that Rey is one of the leaders of the Rebellion standing up to Kylo’s First Order army and that she’s pursuing her own vision quest, tracking down clues to find and defeat Palpatine’s secret hideout—and hopefully plumb her own heart.

That’s just the first five minutes or so.

“The Rise of Skywalker” endeavors to wrap up nearly half a century of Skywalker family stories. I’ve heard all the criticisms of the film, as if a million voices suddenly cried out in terror—and I feel you, really—but, me personally, I left the film feeling happy. Maybe it’s just that I’ve lowered my expectations the right amount this time. Because this film is flawed and often confusing and mostly shallow. But between the blurring stars of light speed and the humming light sabers, between the dazzling spectacle and a handful of emotional beats, it’s more satisfying than the last two sequels, “The Force Awakens” or “The Last Jedi.” I liked it.

Of course, I acknowledge that director J.J. Abrams can’t resist unoriginal riffs on Lucas’s original trilogy—as he did annoyingly slavishly in his first “Star Wars” sequel, 2015’s “The Force Awakens.” But at least, he has the decency to mix it up a bit this time—if, perhaps, only accidentally—so it feels more like echoes and a reprise of grand themes. The way a song returns throughout an opera, changing tones and meanings as it arrives in different circumstances. What I’m trying to say is that “The Rise of Skywalker” is, I guess, good enough—as good as I could hope for from Abrams and his Disney team.

For the most part, “The Rise of Skywalker” forgets the last film, 2017’s Rian-Johnson-directed “The Last Jedi,” which ended with Luke Skywalker dead (of course he too plays an active role in this new film) and the Rebellion whittled down to a half dozen celebrities who escape a seemingly dead end cave with help from crystal bobcats and one last ship. Somehow, the Rebels have an army and bunch of ships (if mostly small ones) again at that start of this adventure.

Leah—played by Carrie Fisher who died in real life after shooting the last film—is back as a wizened general through the miracle of, apparently, old footage, smoke and scotch tape. Like a lot of the film’s first act, her appearance is clunky and kind of confusing. It seems like she tries to give Luke’s lightsaber to Rey several times with them trading it back and forth like a revered laser hot potato.

No matter! Rey and Finn (John Boyega) and Poe (Oscar Isaac) and BB-8 and a cute new robot sidekick are busy racing across jungle to desert to caves to Porg island. They’re chasing down a dagger, which they hope will lead them to some evil GPS pyramid-thing to track down Palpatine. Kylo and his boys are hot on their heels.

There’s a lot of action, but for a long while I was all like who cares? All the terrible dialogue doesn’t help. At one point, Kylo falls down and actually croaks, “Ouch.”

Mostly the film is an excuse for dazzling set pieces—a motorcycle chase through desert canyons, Rey leaping up into the air to lightsaber off the wing of Kylo’s tie fighter. And I’m happy to deliver the news that “Star Wars” finally has a quicksand scene.

The Rise of Skywalker” is full of resurrections and second chances (including for director J.J. Abrams). So many characters who seemed dead turn up again that I began to happily look forward to a Jabba the Hutt cameo.

The story finally begins to connect when Rey accidentally blows up a transport spacecraft that a kidnapped Chewbacca is apparently aboard. I was floored by the terrible loss of the great fuzzball—while simultaneously suspecting that Abrams was just narratively fucking with me. This is a significant improvement over Abrams’s handling of the death of Han Solo in “The Force Awakens” in 2015, which offered a split second of grief before everyone seemed to forget all about that Han guy and get on with their lives.

Everybody gets a chance to die and everybody gets a chance to come back to life in “The Rise of Skywalker.” Including the robot C-3PO (still played by Anthony Daniels after all these decades)—through the erasure of all his memories. Which is especially poignant to “Star Wars” theologians who will recall that in the original “Star Wars” it was shown that one of the ways humans kept droids enslaved was by regularly wiping their memories clean. But Luke didn’t do this when he first met/bought C-3PO and R2-D2, who promptly ran away, which launched this whole “Star Wars” thing.

Though the core “Star Wars” films have been seen as the Skywalker family story— and this film suggests that perhaps the saga may really have been the Palpatine story—the loss of 3PO’s memories remind that he’s been on this adventure since this beginning too.

“If this mission fails, it was all for nothing, all we have done, all this time,” 3PO says before they tinker with his mind. He pauses, “Taking one last look at my friends,” breaking my heart before he goes under the screwdriver.

The destruction of his memories feels somehow like my own aging and future death—the treat of the demolition of my own lifetime of “Star Wars” memories, growing up with the stories and all they’ve meant—and what a devastating loss it would be to have my own recollections of these adventures—and all my own real life adventures in between—slip away.

Poe and Finn opt to wipe 3PO’s memory to dig out a translation of some forbidden evildoer text that’s buried in there. That and the dagger lead them to the astonishing ruins of the Death Star. Wow! Rey crawls inside, where she finds the GPS evil-doer-tracker, then fights a jaw-dropping laser sword duel with Kylo atop the wreckage as “Perfect Storm” tidal waves threaten to sweep them to their deaths. Wow!

When the Rebels finally track down Palpatine’s fleet and Rey confronts the old coot himself, the scene drags on and on. And the confrontation choreography of the battle is bewildering nonsense. Goodness, I miss the awesome clarity of the climactic suicide mission assault in 2016’s “Rogue One” (one of the three best “Star Wars” flicks, IMHO, up there with the original “Star Wars” and the greatest of all, 1980’s “The Empire Strikes Back”).

But it’s still satisfying to blow up all the bad things and return to base to hug and cheer and pump fists in the air. And somehow weirdo galoot Adam Driver is able to carry the weight of Kylo’s cockamamie journey of the heart and make the mumbo-jumbo feel not totally bonkers and even actually sort of affecting.

Many critics have complained that “The Rise of Skywalker” does too much “fan service”—offering too many shout outs for insider know-it-alls. But you come to it not on the merits of any single film, but because you’re seeking another fragment of the epic Hollywood legend, because you’re invested in the whole saga.

A coda to the film in which Rey returns to the Skywalker ranch in the desert, from which Luke launched his adventure, feels nearly right—melancholy, nostalgic, wistful, hopeful. Part of the pleasure of this film in the end is that I’m always happy to have one more rare visit with beloved old friends. Hello again, Mark Hamill and Carrie Fisher and Harrison Ford and Billy Dee Williams and Anthony Daniels and even Daisy Ridley and John Boyega and Adam Driver.

The point is the nostalgia, getting the gang back together for one more caper, reflecting on how far the characters have come, and how far we in the audience have come. The danger for the filmmakers isn’t too much nostalgia, but failing to give proper emotional weight to the endings of characters and stories that have become, over generations now, so deeply, so meaningfully woven into our world. 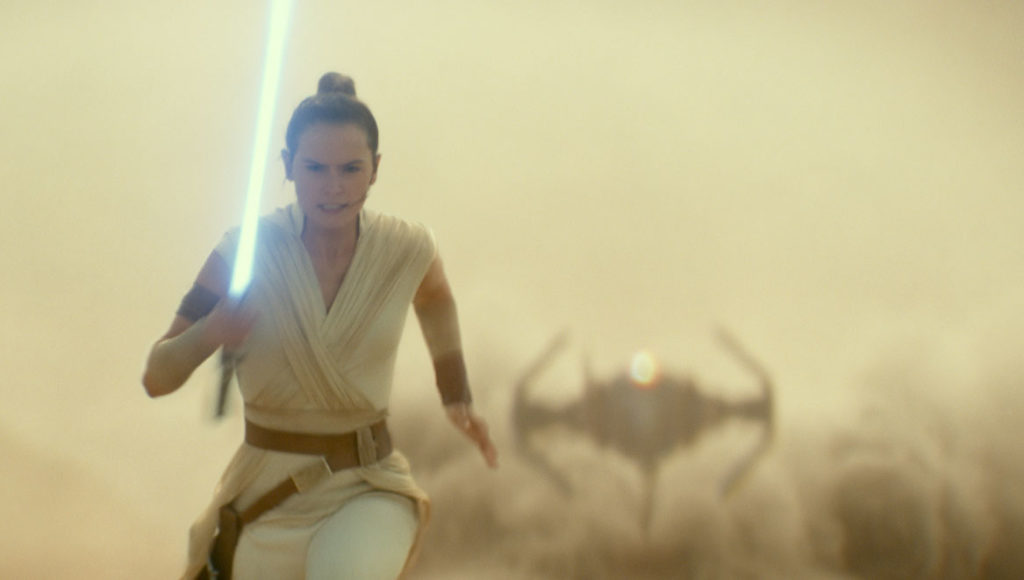