“I wanted to share this idea of home, with the community, with the city of Somerville,” Imagine (Sneha Shrestha), a Nepali artist living in Somerville, said of the calligraphic mural in orange and blue that she’s painting at 47 Webster Ave. in Somerville. She was speaking at the Aug. 22 artists panel at the East Branch of the Somerville Public Library, hosted by Dave Ortega of the Somerville Media Center, which broadcast the discussion. Imagine is one of three artists commissioned by the city to paint murals in the community this summer.

“I was thinking about different things I could write in my native language,” Imagine said. “Usually reading the wall isn’t part of what I expect people to do, because it’s in Napali or it’s in Sanskrit. Obviously people won’t be able to read. The idea behind it is to be able to appreciate something that looks different from a different culture, and still respect and appreciate it. And still have conversations about it. Or ask questions about it. The idea comes just the idea of people from all different walks of life in one city. … So I choose a phrase and I repeat it over and over again throughout the wall. The phrase that I’m writing in Nepali is ‘Home is where the heart is free.’”

Wednesday, Pascal Michel, a Haitian artist invited here for the mural project, put the finishing touches on his mural on the side of Highland Creole Cuisine at 2 Highland Ave. It shows Boston’s Zakim Bridge transposed on a tropical Haitian landscape. Trucks carry people cross the bridge—seemingly a story about travel, migration, immigration. His theme, he said (via translator Wadson Michel) at the forum, is “How to bring Haiti and Boston together.”

And at 50 Broadway, Calo Rosa, a Salvadorian artist based in Philadelphia, has been painting an image of a young woman amidst tropical foliage. The young woman—based on a Salvadorian friend who moved to Boston six years ago—is intended to represent the Salvadorian community.

“We all have our nostalgic feeling when we’re away,” Rosa said at the forum. “What makes me come back are the colors and shapes of the flora from El Salvador. … I usually use those elements of flora that are really, really specific for the tropics. That is an easy way to connect people.”

Previously:
Aug. 28, 2018: Check Out These Three Murals Being Painted In Somerville 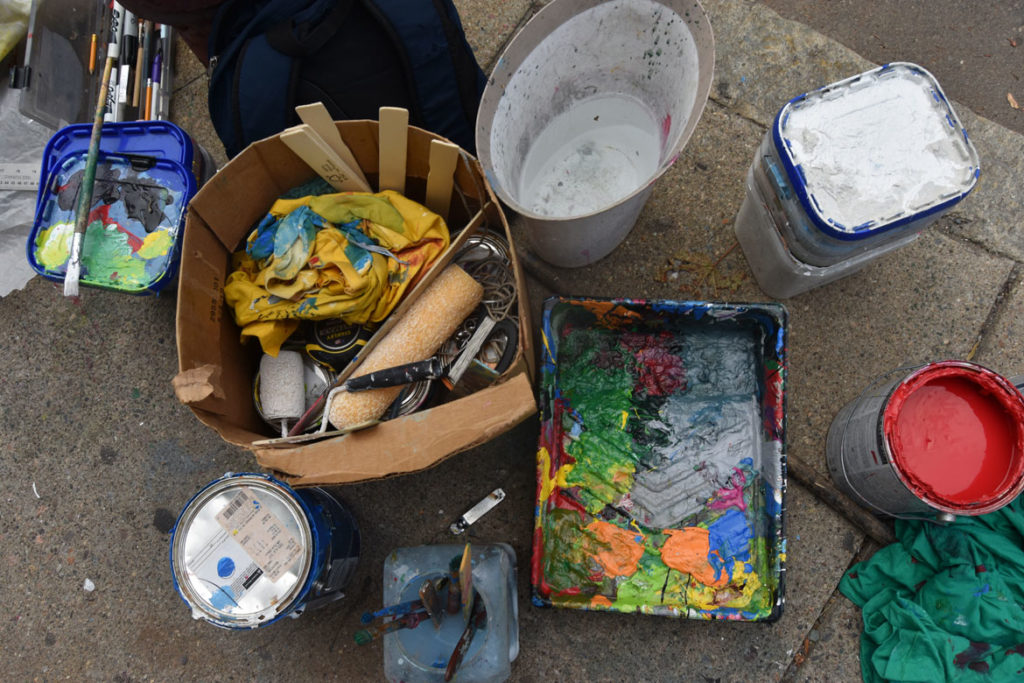