NOTE: I’ve been commissioned by the Essex County Community Foundation to help document/promote cultural projects from its Creative County Initiative, which is supported by Boston’s Barr Foundation.

As darkness settled on Salem’s Point neighborhood last Saturday night, machines began to fill the warm spring air with haze. Then the crowd of dozens of people gathered in a parking lot at 34 Peabody St. ooohed as lasers lit up the air—blue and green and red, lines and grids and wedges of light, sometimes it all seemed to ripple like waves.

And recorded voices in Dominican and Haitian and Salem townie accents began to speak: “I wasn’t born here in Salem. I was born in Santiago, Dominican Republic.” “My mom came here from Brazil when she was really young, like 16 or 17.” “When I first came into the Point I was very scared. I couldn’t speak the language. But the Point was like an escape room.” “Everybody spoke French in the Point when I grew up in the ’50s. So it was still very French-Canadian centered.” “They came here for a mission, to become established here, to provide more opportunities for themselves and their children. They accomplished that.”

The laser and sound installation “Im|Migration” by Stephanie Benenson of Hamilton for the North Shore Community Development Coalition’s Punto Urban Art Museum repeats on May 16, 17 and 18 from 8 to 10 p.m. each night. In addition to the light show, the presentation includes an augmented reality project in the outdoor Alley Gallery off the parking lot and photos of community members by Jeff Barnett-Winsby of Wassaic, New York, printed on banners hung on a fence across the street at Peabody Street Park. On May 18, the coalition also holds its “Fiesta de Arte” fundraiser from 9 p.m. to 1 a.m., with music, lighting installations and performance art at its loft gallery at 96 Lafayette St.

The project is funded by a grant from the Essex County Community Foundation’s Creative County Initiative, which is supported by Boston’s Barr Foundation. The initiative aims to mobilize North Shore artists, arts organizations and community and business leaders to enhance life in Essex County.

The coalition’s CEO Mickey Northcutt says, “I don’t ever remember seeing or hearing the immigrant stories of the people in the Point over time all of them told together as one, the French Canadians and the Dominicans, all told together.”

For more than a century, Salem’s Point neighborhood, just south of downtown, along the South River, has been a tight-knit immigrant community—Irish and French-Canadians and, in more recent generations, Dominicans, Puerto Ricans, Brazilians, Algerians. Northcutt says, “It has been and it is a really welcoming place for people.”

“The essence of what we do is we want to create opportunity and improve the quality of life in the Point and other neighborhoods we work in. I think the best way we can do that is to tell stories,” Northcutt says. “People don’t always want to do that because there’s a stigma. … Not everyone wants to tell their story about being poor.”

In 2013, the North Shore Community Development Coalition worked with the City of Salem and the Point Neighborhood Association to develop the “Vision and Action Plan” for the Point. It calls for affordable housing, infrastructure, a community center, and youth services.

“One of the major goals in the action plan was to address the long standing stigma that’s directed at the neighborhood and the people in the neighborhood,” Northcutt says. “The reality in the Point is it is a wonderfully family friendly, welcoming neighborhood for Salem.”

And, as part of the coalition’s efforts to support the Latino and Caribbean community that’s the majority in the Point now, the coalition has been funding “social justice public art.”

In 2017, the coalition launched the Punto Urban Art Museum, producing over 50 large-scale murals by dozens of artists to brighten the walls of affordable apartment buildings within a three block radius. Northcutt says the goal is to maintain the neighborhood as a home to current residents while producing “art that is inspiring for the people who live in the Point, but also inspired by the people in the Point. It’s also an invitation for people not from the Point to visit. We find often the stigma is rooted in a lack of understanding. People haven’t had an invitation or a reason to come to the Point.”

Bridging The Past And The Present

Stephanie Benenson grew up in Rockport, then spent time in New Orleans and New York, where she studied painting at the Art Students League and National Academy of Design and worked in advertising, before returning to New England to earn a master’s degree at Rhode Island School of Design in Providence in 2017.

Upon graduating, Benenson got a grant from the school that funded her launch of Harbor Voices, which she describes as an art “collective.” Benenson says she’s the lead artist, “responsible for the idea,” then she brings in like-minded partners to help produce the lasers or photographs or augmented reality.

“When I moved back to the North Shore, I started to explore social practice and community public art,” Benenson says. It’s public art positioned as community building and service. “An artist can approach a community and create art that can emerge from things that are important to them or their history or their culture.”

Benenson’s first Harbor Voices project was a laser and sound installation called “100 Voices, Our Collective Story” that lit up the auditorium of Gloucester City Hall in December 2017. The audio featured Benenson’s recordings of Gloucester High School students recounting the immigration stories of their families, friends and neighbors, as well as “their relationship to the stories.”

“One of the things I most appreciate in community storytelling is when stories are passed down from generation to generation,” Benenson says, stories of grandparents and parents who took great risks that changed their family’s destiny. She hopes hearing these accounts fosters empathy among students for immigrant peers who are just learning the English language. “This is something that happened in my family a couple generations ago.”

Laser shows are usually more typical of nightclubs or concerts. “I loved the luminosity of the light,” Benenson says, “but I needed to find a way to slow down the lasers so they moved at a pace that the software almost didn’t want them to move.” She develops her displays with a professional laser technician (as required by law, she says) Andrew Dranez of Newburport and Lyra Leourneau, who recently moved from Maine to Orlando.

“I intentionally create movements with the light in the installation that in a way it makes you listen more closely,” Benenson says. “You’re looking, looking, looking and all of a sudden they get really still and you just see the haze moving through the light. … I slow down the lasers as much as I can so I create this hypnotic state so you can really listen. … They’re meant to be meditative. The lights help create that atmosphere.”

At Illuminus, a festival of contemporary light and sound art in Boston in November 2018, she presented a laser and sound installation called “My Name Translated Is Strength” outdoors at night at the Irish Famine Memorial. It was based on two days of recording Benenson did of 50 students at Suffolk University in Boston. Benenson particularly recalls one student of Pakistani heritage who convinced her grandfather to allow her to be the first woman in her family to go to college—and once her grandfather said yes, all her female cousins applied to college, too.

Then Benenson connected with Northcutt, who proposed working with her to produce a public artwork highlighting the generations of immigration to Salem’s Point. “No one has ever really made a connection from that history to the more recent history of immigration,” she recalls he told her. “He wanted to bridge that history.”

For Salem, Benenson spent three months recording more than a hundred interviews of students in English language classes at North Shore Community Development Coalition and Salem’s House of Seven Gables, of staff at the Community Development Coalition, of people they recommended, of businesses along Lafayette Street and throughout the neighborhood. She boiled the recordings down to the eight-minute laser show and sound collage of stories of obstacles and triumphs that debuted in the Point on Saturday night, May 11.

“The intent is to connect stories of the past with the present. The struggles of the past are like the struggles we have today. We have to support each other,” Benenson says. She makes the recorded voices talk from speakers at different ends of the parking lot. The sound is echoed by lights beamed from different directions that become webs of lines. “The web is supposed to be a visualization of community connectivity or the web of support we offer one another.”

We Never Forget Our Country

“All of us have these immigrant stories, either first or second generation or more,” Northcutt told the crowd at the debut of “Im|Migration” on Saturday, May 11. The event began with a free community picnic across from the parking lot, in the Peabody Street Park. Fly Kidz hip hop troupe from the Salem YMCA danced.

“I was one of the lucky ones to be interviewed. … My family was one of the first families to immigrate into the neighborhood in the late ‘50s, early ‘60s,” Lucy Corchado, president of the Point Neighborhood Association and a former Salem city councilor, told the crowd. Her father worked at a shoe factory. He died shortly after she graduated from high school, too early to see what she has achieved, too early to see how the neighborhood changed. “I became the first elected [city] councilor of the Point neighorhood, the second Latina. And this is just the beginning. I see a lot of promise here. … Nothing can stop you. Only you can stop you. … The Point is a great neighborhood. We have so much to offer.” 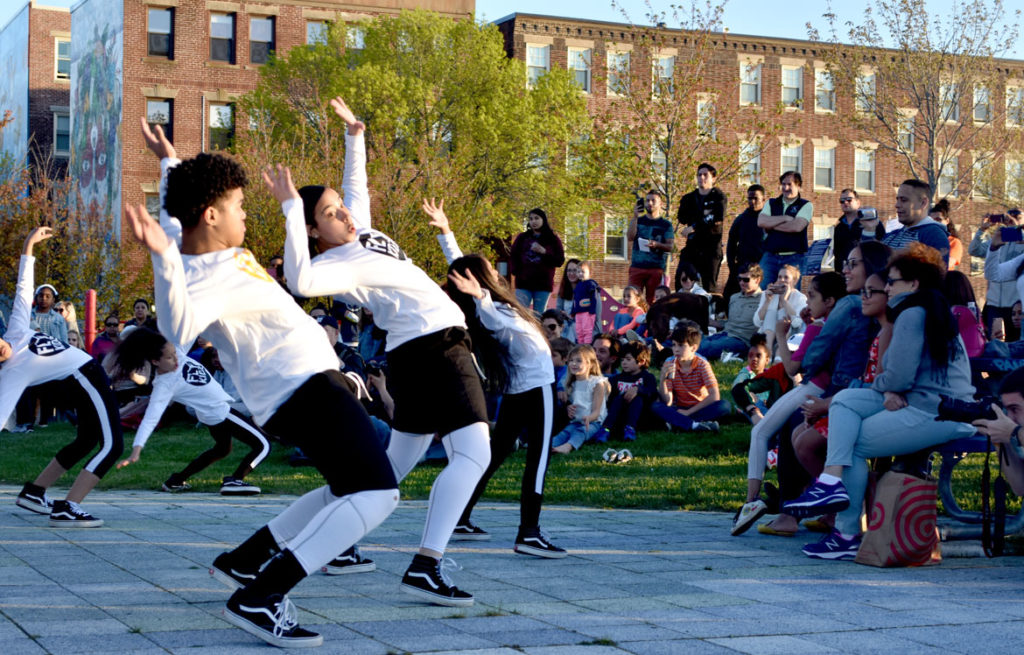 Yoleny Ynoa, a Point resident interviewed for “Im|Migration,” told the crowd about moving to Salem from the Dominican Republic in 1994. “I came here for one reason: to try to get a better opportunity. In our country, we don’t have it. … But we never forget our country.”

“We’ve collected 100 immigration stories past and present,” Benenson told the crowd. “Stories of intergenerational mobility and communities of people supporting each other.” Too often, she said, the stories of immigrants have been marginalized and ignored. “All stories have meaning. All stories have importance.”

The lasers lit up the night and the recorded voices described Point residents’ experiences: “There’s a word in Portuguese, maresia, it’s the essence of the scent of the ocean. It just feels so familiar.” “When I see my grandmother, I see this strong woman. I see a Harriet Tubman. I see a Rosa Parks.” “It’s a beautiful, beautiful country. You have many opportunities. You have people respect you.” “I say I have two birthdays—one when I was born in my country and the other one, I was born when I came here to the United States.”