Artists involved in the African American Master Artists In Residence Program at Northeastern University charge that on Sunday the Boston school locked artists out of the building the four-decade program has long occupied in Jamaica Plain, and is trying to push the artists out of the place.

On June 28, Maria Cimilluca, a Northeastern vice president for facilities, sent a letter to artists in the program, which is affiliated with the school’s Department of African American Studies, ordering them to move out of program studios at 76 Atherton St. by July 13 “because of hazardous conditions” in the building. (Read: Cimilluca’s full letter.)

“Recent patrols and inspections have revealed increasing safety and security concerns,” Cimilluca wrote. “Northeastern received an engineering report from an outside firm that lists significant structural, electrical, and other hazardous conditions that currently exist within the building; some of these conditions have been created/exacerbated by the occupants.”

“It really caught us off guard,” says Don West, a photographer who has been one of the program’s artists for more than 20 years. “It came out of the blue.”

“There was no prior discussion for this to happen,” says fiber artist L’Merchie Frazier, who has had a studio in the building as part of the program for more than 10 years. Artists say the school has not offered them any alternative space to use during the repairs. “….The idea that this building is being declared unsafe has to do with them taking the building to do what they want to do with it.”

“They may be playing smaller games to get rid of us,” West says. “…This is really a front on attack on us right now.”

“Right now we have to be focused on making the space safe,” Renata Nyul, a vice president of communications at Northeastern University, told me via email Monday. “That is our number one priority. (I’m sure you recall the tragedy in Oakland that resulted in dozens of lives lost.)”

Monday afternoon, I asked Nyul via email: Is there a timeline for when Northeastern plans to complete the repairs? And is Northeastern going to have AAMARP move back into the building after the building repairs are made? I’m awaiting a response.

“This process with this institution is one that is bankrupt and corrupt if it does not recognize the work, labor, strength of the people who have put in the time and energy displaying the community, the people in it,” longtime Boston activist and politician Mel King said at a press conference artists held at the building Sunday evening. (See video below.) He said he’s called the office of the president of Northeastern and the school’s lawyer. “I wanted them to know that we need to honor the work and the lives of the people who have made this place an incredible resource for the city and for the school. And I think people need to really understand it that you have an incredible resource that you’ve put together. They didn’t put it together. … The power of what you have accomplished, what you present has an impact on how we get treated in this country and how the world should work.”

A Haven For Black Artists

The African American Master Artists In Residence Program began with the artist, teacher and activist Dana Chandler. During the 1960s and ‘70s, he was known around Boston for his art celebrating black Americans and challenging racism. He also challenged the de facto white-artists-only segregation of Boston area museums like the Museum of Fine Arts, the Institute of Contemporary Art, and Brandeis’s Rose Art Museum. He pushed them to exhibit art by living African-American artists.

When Chandler’s personal studio in Boston’s South End was ransacked and the building then burned in 1973, Northeastern came to his aid by bringing him in to be an artist-in-residence at the school’s new African American Studies program in return for teaching a course at the school.

Chandler soon convinced Northeastern to give him larger space, in an old factory at 11 Leon St. in Roxbury that the school owned. He moved in in 1974 and turned it into a mammoth studio (around 32,000 square feet) and event space, hosting parties for the MFA and a conference of African American artists. The space was so large that in November 1978, Chandler and Northeastern opened the space up to other black artists as part of the launch of the African American Master Artists In Residence Program. Ten large studios were offered “to provide a living focus for the international third world and world community around the diverse dynamics of African-American aesthetics,” organizers said at the time.

It was a landmark project in its recognition of black artists, in the amount of space offered, in the length of the residencies (three years to start, but many allowed to stay much longer; some current resident artists have been there decades), and it was “rent-free” (which continues to this day, artists say). “Thus enabling the artists to produce works at a level of intensity none has ever been able to attain,” organizers wrote in the late 1970s.

Chandler served as the director until the 1990s. Amid budget cuts, “in 1991, they pushed my amount of time to work as director to one day a week and in 1993 they fired me,” Chandler tells me. He says he maintained a studio there until 2004, when he relocated from Boston to New Mexico.

Over the years, the program moved from Leon Street to a Huntington Avenue building, then back to Leon Street, and in recent years at 76 Atherton St.

Current artists participating in the African American Master Artists In Residence Program reached out to Chandler when Northeastern told them last week that they’d have to move out. He says, “I wasn’t at all surprised because they were doing exactly what I expected them to do. And they’re doing it the way they always do. They make it a fait accompli and tell you what they’re going to do.”

“I think that they have done with us. They’re following the pattern of things across the country if it has to do with black people. They’re ending stuff. They’re acting like a lot of people of your persuasion. They have no use for us,” Chandler says. “There are no substantial uncorrectable problems with that building. They don’t want this program there because it occupies what they see as useable space.”

After receiving the June 28 letter from Cimilluca, artists participating in the African American Master Artists In Residence Program were under the impression that they could come to the building Sunday morning to get new keys.

“The locksmith was there. He changed the core,” Frazier says. “We were supposed to be issued keys after we showed our IDs. We were not.”

“They were basically locking us out,” West said. “…They had changed the locks and did it right in front of us. … They did change the lock on the front door, which meant we were locked out.”

School officials, Frazier says, “did not suggest we could return” after the building renovations or offer an alternative location for the studios. 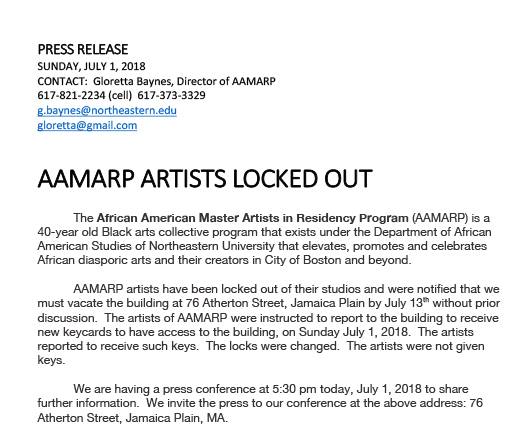 Northeastern spokesperson Nyul emails me: “access to the artist space has never been revoked. At no point was anyone locked out of the building. The building is not zoned for overnight occupancy. Per our letter to AAMARP program leadership, starting July 1, access is available from 8 am to 6 pm until the space can be cleared and significant work can begin to repair the damage and eliminate the hazardous conditions that have been putting people’s safety at risk. The new keys were available today to artists who have studio space in the building. We are going to discuss the future of the program this week with [program director] Gloretta Baynes.”

Cimilluca brought keys Monday morning, artists say. “She couldn’t answer a lot of our questions,” West says. The school is saying “we’re trying to repair the buildings in various ways and we want to protect your works. That’s just jive. … There’s another agenda here and we don’t know what it is.”

Cimilluca’s letter says Northeastern has “expressed to you over the past few years” the school’s safety and security concerns. “Due to these hazardous conditions and the need for the university to secure the premises, we are advising you that the occupants must vacate the building and take any personal items with them.”

About a dozen artists in the program have studios on the four-story building’s two top floors. The building is also home to additional studios, not part of the program, and storage for the school’s campus bookshop, artists say.

“The fact that they have not advised any other occupants of the building to vacate helps me understand that we are being targeted,” Frazier says.

Cimiluca writes: “We understand that this news may disappoint you and others, but given the deteriorated condition of the building, and the derelict way that some of the users/occupants have abused the space, we have no alternative to the planned approach.”

The letter from Cimilluca concludes, “The current AAMARP program has operated independently of the university for over a decade; separately from the safety issues with the building, the Deans of the Colleges of Social Sciences and Humanities, and Arts, Media and Design, will evaluate the potential of a new relationship with AAMARP.”

Frazier says, “She wrote that we are independent. We are not. We are part and parcel of the university’s Department of African American Studies.”

“The thing that still hangs over our head is the July 13 eviction notice,” West says.

“You can’t get a program that’s been ensconced for 40 years out in two weeks. It’s absolutely ridiculous,” West says. “…If they want us out of the building, let’s sit down and be civil. … Fundamentally, we want AAMARP to live on however we go forward.”