Fra Angelico, the 15th century Dominican Catholic friar, “was one of the most revolutionary painters of his moment, in part because of the way he told stories,” says Nathaniel Silver, associate curator of the collection at Boston’s Isabella Stewart Gardner Museum and the organizer of “Fra Angelico: Heaven On Earth,” on view there through May 20, 2018. The “the sole venue” for the exhibit, it offers a rare chance to see the art of the Renaissance master up close.

In exquisitely painted Christian scenes, decorated with gold, and painted in exquisite faerie blues, pinks and reds, “Fra Angelico pioneered many of the stylistic trends that distinguish the early Renaissance, including the rational treatment of pictorial space and the volumetric modeling of forms with light and shadow,” New York’s Metropolitan Museum of Art asserts. “At every stage of his career, in fact, Fra Angelico remained at the forefront of artistic innovation in Florence.”

Silver argues that part of Fra Angelico’s innovation was to break away from tradition (“The norm at this time is to copy the thing that came before you,” Silver says) and invent new ways of telling the familiar Bible stories.

The show features 13 paintings Fra Angelico created between the 1420s and ‘50s. “The core of the exhibition is around one of the icons, one of the masterpieces of the museum,” Silver says. Isabella Stewart Gardner acquired Fra Angelico’s “Dormition and Assumption of the Virgin” (about 1433/34) in 1899. It’s one of a set of four reliquaries (exulted containers for the bones, skin, or hair of sacred people) that he painted in quick-drying egg tempera and oil glazes, plus gold, on wooden boards for the church of Santa Maria Novella in Florence.

Help Wonderland keep producing our great coverage of local arts, cultures and activism by contributing to Wonderland on Patreon. And sign up for our free, weekly newsletter so that you don’t miss any of our reporting.

They recount the legend of Mary, the mother of Jesus Christ, the central figure of Christianity. “She married an aging suitor (Joseph); miraculously conceived a child while remaining a virgin; never died but fell into a final sleep (her Dormition); and was assumed body and soul into heaven, where Christ crowned his mother as queen,” a sign explains.

“The Dormition and Assumption of the Virgin” depicts, at bottom, Mary as a green-faced corpse laid out on her funeral bier with saints gather around her. Above she stands atop a cloud, seemingly dancing her way up to heaven as angels around her.

“The way he tells it is brand new,” Silver says. “He’s not just showing you what happened, but he’s thinking about how it happened, what the angels are doing. … Though this kind of divine vortex, they are kind of propelling the Virgin into heaven. The wind that they’re generating is actually moving their garments. He’s actually thinking not just that she ascended, but the very means of her ascent.”

Fra Angelico (about 1400–1455) trained in Florence to be a painter of holy manuscripts and small narrative panels. “Admission to the Dominican order—a religious group of devout intellectuals who defended the church from heresy— transformed Guido’s career,” a sign says. “Monumental altarpieces and fresco cycles for the order’s churches established his reputation for innovative sacred images. Successes in Florence and Fiesole led to prestigious commissions from the pope.”

Imagine dark churches, with few windows, lit by candles and oil lamps. “They’re filled often with incense, some smoke. Maybe there’s a shaft of light coming in from the window that’s illuminated in the candle smoke. Then you have these dots of light around the church, around the altars,” Silver says. On or above the altar, picture one of Fra Angelico’s paintings, shimmering with gold and heightened blues made with lapis lazuli rock imported from what is now Afghanistan, a material then “as expensive as gold,” Silver says. The gold of an altarpiece would reflect and amplify the candles on the altar. “It would have been a beacon.”

Fra Angelico is “also called on to tell stories that haven’t been painted before,” Silver says referring to the “Paradise” altarpiece that he painted between 1431 and ’35 for Sant’Egidio (Saint Giles), a church attached to the largest hospital in Florence. It resembles one of the usual scenes of Christ crowning Mary in heaven—except for a slight difference. Silver says, “the Virgin, if you look very closely, is already wearing a crown and Christ is reaching across and placing a gem in it.” The gem is a raised bump, “a tiny little plaster detail.”

“It is a story recounted in the text written by [the Saint] Bridget of Sweden, a medieval mystic, but this story has never been painted before,” Silver says. “Christianity generally tends not to change much over time. So introducing a new subject is a big deal.”

The name Fra Angelico was a name the artist acquired after his death to honor his talents. He’d been born Guido di Pietro and known for most of his life as Fra Giovanni, the name he chose when he joined the convent of San Domenico in Fiesole. “The epithet ‘Angelic Painter’ is a direct comparison with [the great Dominican theologian ] Thomas Aquinas, who was called the ‘Angelic Doctor,’” Silver says. “To be compared to Thomas Aquinas is like being compared to Einstein today. He’s one of the great intellectuals of all time.”

“He’s able to retell certain Christian stories in new ways, ways that people haven’t thought about before,” Silver says. “He looked to create completely novel images from scratch. He’s the painter you go to if you want something completely new, completely different. … He has both the imagination and the technique. It’s an amazing combination.”

Help Wonderland keep producing our great coverage of local arts, cultures and activism by contributing to Wonderland on Patreon. And sign up for our free, weekly newsletter so that you don’t miss any of our reporting. 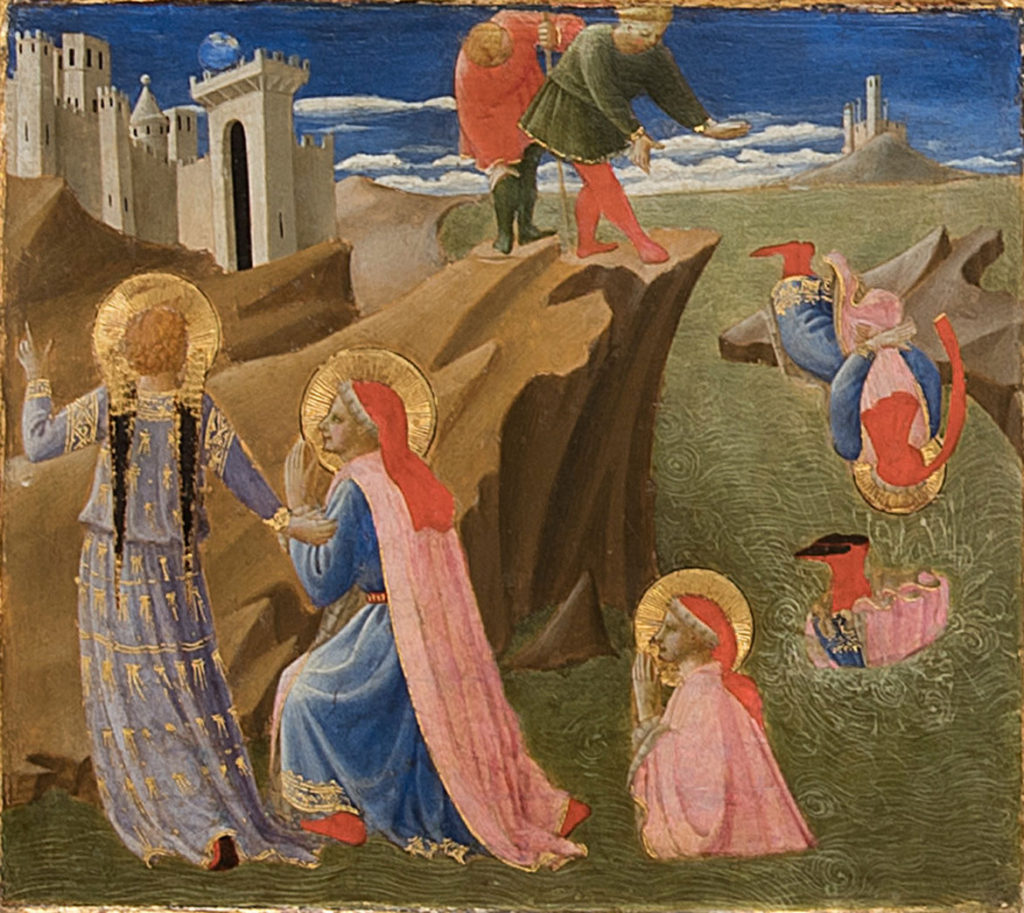