For Presidents Day, here's a report from our archives on colonial Rhode Island and Boston painter Gilbert Stuart's portraits of George and Martha Washington:

The painter Gilbert Stuart left Ireland and sailed for New York City in March 1793, abandoning debts he'd amassed during 18 years in London and Dublin and scheming to find his greatest subject. After years of painting British bigwigs, the 37-year-old aimed to return to his native soil to paint the first American president, George Washington. He told a friend, "There I expect to make a fortune by Washington alone."

"George and Martha Washington: Gilbert Stuart's Athenaeum Portraits," on view at the Boston Athenaeum through May 13, 2006, is a glimpse into Stuart's success.

Though the Stuart paintings are frequently shown at the Museum of Fine Arts, which has owned them jointly with the National Portrait Gallery in Washington, D.C., since 1979, this show returns them to the place where they were first publicly shown. The Athenaeum presents them with more than 35 related works from its collection to add context and show how Stuart's portraits of the first couple became the model for later representations, including the portrait on the dollar bill.

When Stuart returned to America, the artist from Kingston, R.I., was considered one of the greatest portraitists of his generation and a charmer, despite his reputed alcoholism, stubbornness, vanity, unpredictable delays, and penchant for taking half-payment upfront for portraits he failed to deliver. He won a letter of introduction to President Washington and arrived in Philadelphia, then the federal capital, in November 1794. 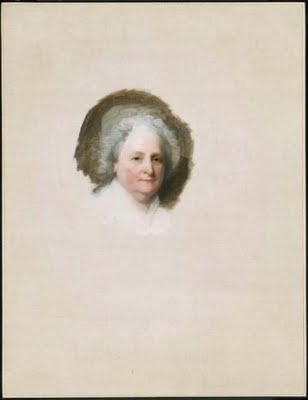 After producing an initial portrait of Washington, Stuart got a commission from Martha Washington, who wanted paintings of herself and the president for their home, Mount Vernon. In the Athenaeum's two small, sleepy galleries, you often have these portraits all to yourself, and the experience is like having a royal audience.

George and Martha seem conscious that they are posing for posterity. George is stern and sober, with ruddy cheeks, powdered hair, and eyebrows bent slightly as if to say "Don't trifle with me." The 64-year-old's jaw is apparently distorted by a new set of false teeth. Martha is a stout 65-year-old, with a twinkle in her eyes and a faint grin. Stuart completed their faces, but the rest is barely dashed in.

These became the most famous images of the couple. But why? Stuart's stately portrait of Washington captures not just the man, but the institution, The President. And it didn't hurt that he painted at least 75 (generally inferior) copies of Washington. He called them his "hundred-dollar bills" because of his asking price. Though he'd paint the next four presidents and dozens of other luminaries, the Athenaeum portraits remain his best known works.

Martha Washington tried for years to get Stuart to turn over the paintings. She died in 1802 without even receiving a copy. Some say Stuart purposely left the canvases unfinished so he could truthfully say they weren't done.

The paintings' influence is made clear in this show. It is Stuart's Washington we see in other works, such as an anonymous artist's etching made a year after Washington died in 1799, in which he winces in pain on his deathbed.

The exhibit is filled out by mid-19th-century prints depicting Washington's biography: Washington courting Martha, Washington as a gentleman farmer, Washington crossing the Delaware. But it's the relics from the couple themselves that are most memorable -- books signed by George, a tiny, tattered pincushion that a granddaughter supposedly fashioned from the silk gown Martha wore when she married.

Stuart spent his last two decades painting and running up debts in Boston. At his death in 1828, they buried him in a cheap coffin in the Central Burying Ground on Boston Common. Soon after, a group of eminent Bostonians purchased the two portraits for the Athenaeum from Stuart's widow for $1,500.

Stuart had apparently kept the canvases tacked to his studio door. He seemed to know that their value lay in their having been worked on only in the presence of the couple. A friend once asked him if he ever intended to finish them. "No," Stuart said, "and as this is the only legacy I can leave to my family, I will let it remain untouched."

Originally published in the May 3, 2006, Boston Globe.