The Massachusetts Attorney General’s Office has launched an investigation into Brandeis University’s possible misuse of donations to its Rose Art Museum in response to school leaders’ January threat to shutter the museum and sell off its collection. It’s unclear how long the investigation has been going on.

The Attorney General’s Office filed a civil investigative demand at Suffolk Probate and Family Court in Boston on Tuesday to “investigate the potential misapplication of charitable assets donated for the benefit of the Rose Art Museum at Brandeis University.” But Brandeis’s attorney, former Massachusetts Attorney General Thomas Reilly, says Brandeis agreed to an investigation from the AG around five months ago. “We want them to review,” he says. “Prior to the sale of any art, it’s required that the AG review it. And we want that done.”

Jill Butterworth, a spokesperson for the attorney general, would not comment on whether this filing announces a new investigation or just the continuation of an existing investigation. She says the AG’s office has been “monitoring and watching” the situation since Brandeis leaders threatened the Rose in January.

Stephen D. Immerman (left) of Scituate, Massachusetts, has been named president of Montserrat College of Art. He is scheduled to being work at the Beverly, Massachusetts, school, on Nov. 16. He’ll fill the shoes of Helena J. Sturnick (below), who has lead the school since 2007. In August, the school named its new dorms on Essex Street – the first new building construction the school has ever done – after her.

Immerman has worked at MIT’s Resource Development, Academics and Student Affairs Divisions. He is also chair (a volunteer position) of the State University of New York at Potsdam Foundation Board of Directors, where he helped to lead a $12 million fundraising campaign for his undergraduate alma mater. 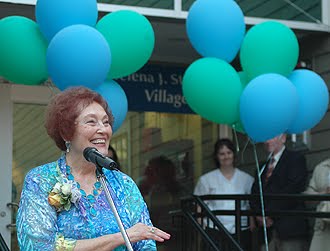 Brandeis agrees to not sell some Rose art

Attorneys disagree on what happened at hearing yesterday

Brandeis University agreed at a court hearing yesterday to not sell any art donated to its Rose Art Museum by three Rose overseers who have sued the school during the length of the trial. Also during the hearing at Suffolk Probate and Family Court in Boston, Brandeis agreed to give the state Attorney General’s office, which oversees Massachusetts nonprofits and public charities, 30 days notice before it sells any art from the Rose, and the Attorney General will in turn notify the three Rose overseers.

Dangel says the judge issued a preliminary injunction prohibiting Brandeis from selling art donated to the Rose by the plaintiffs and their ancestors before the conclusion of the court case. Reilly says there’s no injunction, but Brandeis “stipulated” – agreed – to that.

The New England Journal of Aesthetic Research called the Suffolk Probate and Family Court to confirm the facts, but a clerk there said records from yesterday’s hearing were not immediately available and to check back this afternoon. (Update: I checked back with the court that afternoon, and after being transferred to a few different people, was told that the records may not be available for a week or more.)

The three overseers are seeking to stop Brandeis’s threatened sale of works from the Rose’s collection and preserve the museum. In addition, they argue that if the Rose museum can’t be saved, the collection should be given to a new Rose Preservation Fund that they would start independent from Brandeis. The Waltham university is fighting these claims, and argues that the overseers’ proposals could threaten charities across the state.

Both sides do agree that the next hearing in the case is scheduled for Dec. 2, with trial dates presently set for June 29 and July 1, 2010.

May make MFA visits the most expensive museum tickets in U.S. 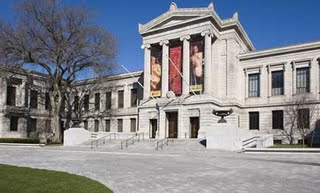 Boston’s Museum of Fine Arts – already one of the most expensive art museums to visit in the United States – is raising its general admission adult ticket price from $17 to $20 as it opens its new special exhibition “The Secrets of Tomb 10A” on Oct. 18.

However, with this 18 percent price hike visitors will now gain admission into everything in the museum, instead of the $25 adult admission previously charged for entry into special exhibitions, like this Egyptian antiquities show, or this summer's “Titian, Tintoretto, Veronese” Renaissance painting exhibit.

From my review of “Damián Ortega: Do It Yourself” at Boston’s Institute of Contemporary Art:

At the 2003 Venice Biennale, Damián Ortega presented what has become his signature sculpture, “Cosmic Thing” (pictured below). He dissected a 1989 Volkswagen Beetle and suspended the individual parts in mid air so that they resemble a 3-D assembly diagram.

It was an eye-catching floating monument to the end of manufacture of the Bug (not to be confused with the "New Beetle," which has been produced since 1994). It spoke of Ortega's native Mexico City, where the car was ubiquitous, kept on the road with parts cannibalized from other VWs. Ortega, who now splits his time between Mexico and Berlin, also saw it as representing the legacy of the Nazis. Adolf Hitler commissioned the Volkswagen as an affordable, durable "people's car" — exactly why the Beetle thrived in Mexico. Dividing the car into its component parts was Ortega's metaphor for atoms that make up molecules, for rocks and gases that combine to form galaxies, for the relationship between individuals and their societies. But mostly, it's a catchy cool showcase for a famously cute car.

Included in "Do It Yourself," a 13-year survey of Ortega's art at the Institute of Contemporary Art, “Cosmic Thing” exemplifies both the strengths and the weaknesses of his style of conceptually based sculpture — and much conceptual art today.

Related: Our interview with Damián Ortega. 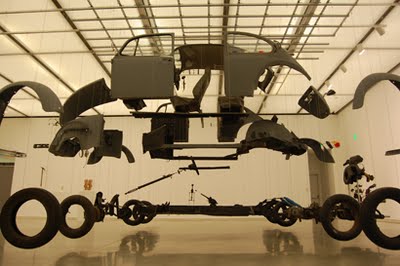 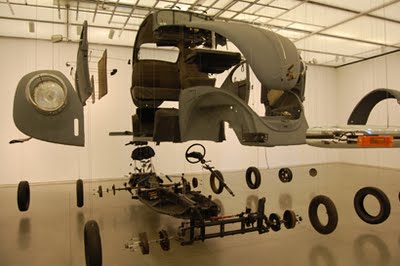 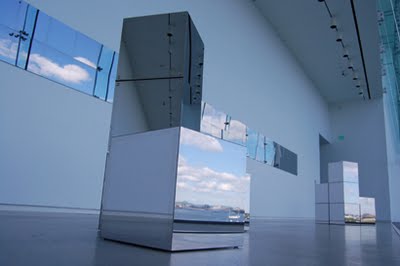 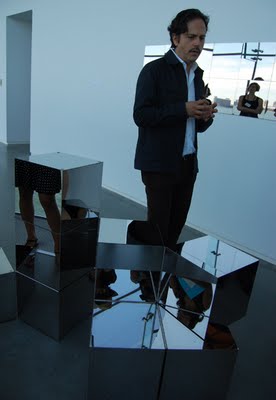 Damian Ortega, a Mexican conceptual sculptor who began his career as a political cartoonist, is exhibiting a survey of his work called “Do It Yourself” at Boston’s Institute of Contemporary Art. On Sept. 15, 2009, I had a chance to speak to him about his background, about some of the ideas in his work, and about the band the B-52s. Here are some excerpts: 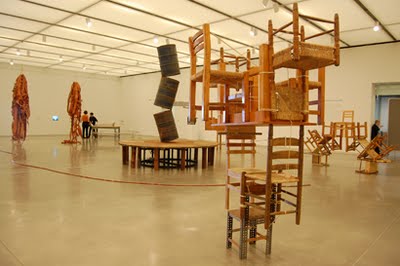 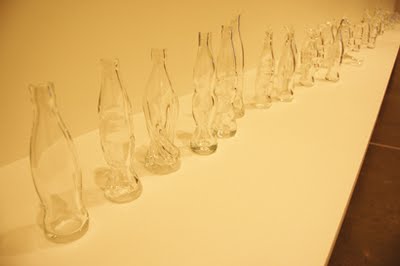 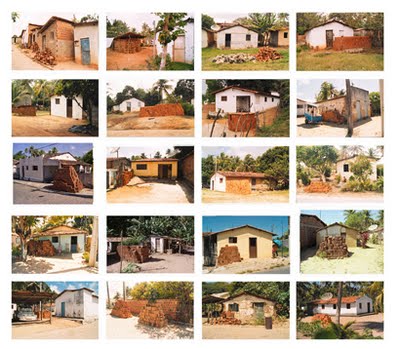 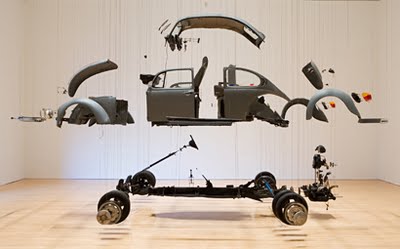 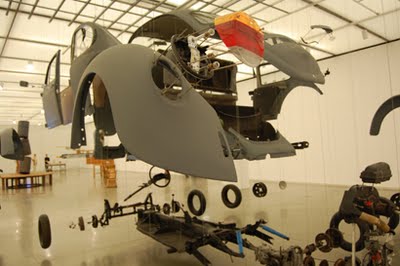 All photos by The New England Journal of Aesthetic Research, except for the photo of "Resting Matter" and the first photo of "Cosmic Thing." 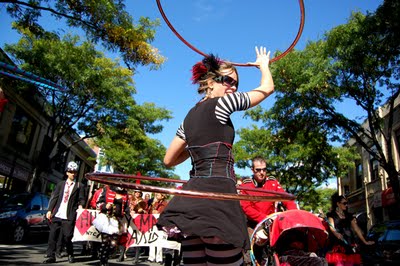 Photos by The New England Journal of Aesthetic Research. Order these images, plus more photos from this year and last year's Honk here. 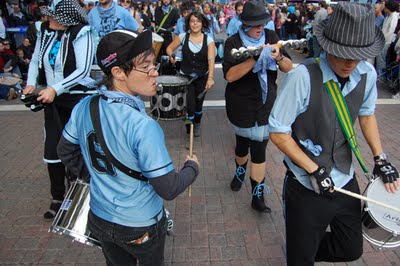 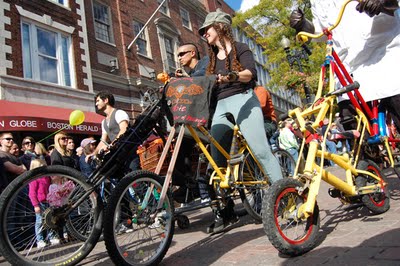 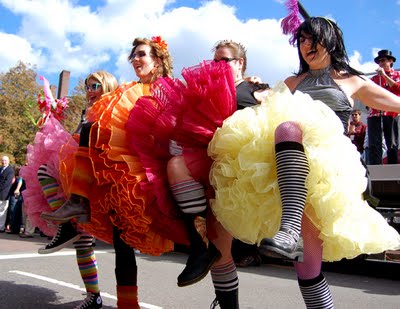 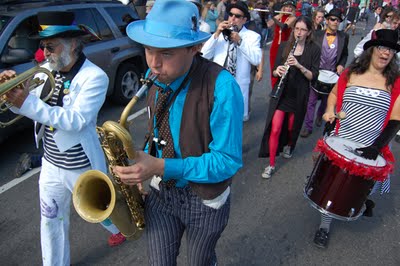 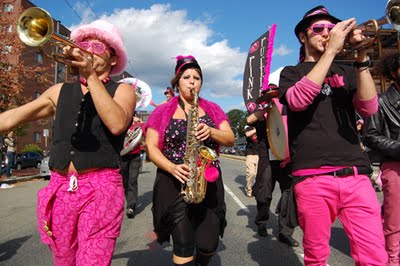 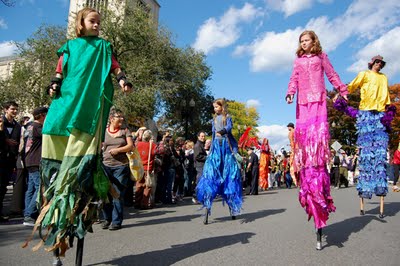 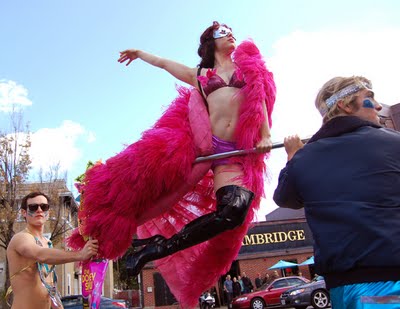 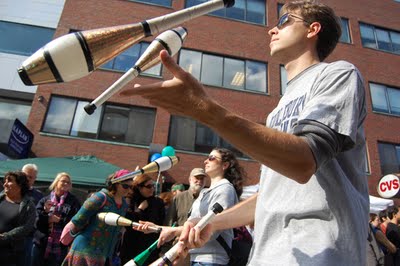 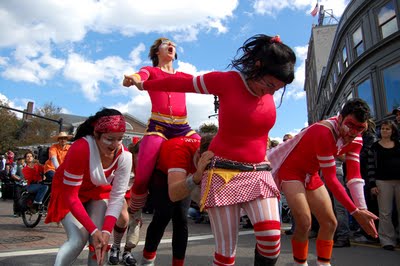