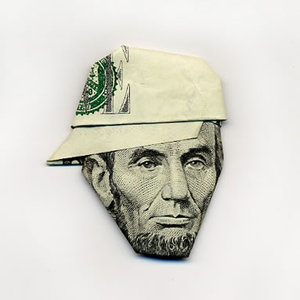 Boston’s Institute for Infinitely Small Things, one of the smartest wittiest conceptual art gangs around, presents its “Origami Stimulus Package” from 1 to 5 p.m. Sunday, April 26, at Brandeis’s Leonard Bernstein Festival of the Creative Arts (inside the campus center atrium).

You’re invited to the “big afternoon party,” as they call it, to “join origami experts from the MIT Origami Club and members of the Institute for Infinitely Small Things to make origami creations out of the Economic Stimulus Package. Our goal is to turn the 600-page package into beautiful origami creations which we will then proceed to sell in order to stimulate the economy. This event is free and open to the public. No origami experience necessary as a 12-year-old origami expert will be teaching us all what to do.”

What to see at 2009 Cyberarts Fest

With the 2009 Boston Cyberarts Festival offering around 70 things to see spread out all across Boston and its suburbs, who can get to it all? Below is our shortlist of what our Magic 8-Ball predicts will most likely reward your effort to get there. (Translation: This is what we’re hoping to see.)

• “Virtuelle Mauer / ReConstructing the Wall,” interactive 3D installation allows you to visit Berlin Wall in mid-1980s, Goethe-Institut, April 24 to May 6.

• “Nourishment” by Jeffu Warmuth and Ellen Wetmore at Art Institute of Boston, April 16 to May 3. 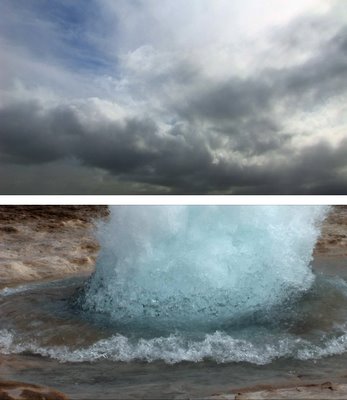 From my review of Raphael Lyon (a/k/a Mudboy) and Peter Blasser's installation "Sound and Light" at Stairwell Gallery in Providence:

Raphael Lyon tells me a story about "Sound and Light," his collaborative installation with Baltimore's Peter Blasser at Stairwell Gallery (504 Broadway, Providence, through May 2). A man came by and asked how much it cost to enter the dark gallery. "He thought it was a ride," like something from a carnival, the Providence artist explains. "To me that was the greatest compliment. I'm interested in experiences. I'm not interested in objects."

The experience here is free. Enter past curtains that blackout the space. At the back of the dark room stands what looks like a giant hollow tree trunk, with a glowing, watching dragon eye floating inside. Surrounding the trunk, toward the ceiling, is a constellation of tiny purple lights that look like stars. The space pulses with electronic hums, something like whale calls, beeps, alarm horns, ghost howls. It could be a haunted wood from a fairy tale.

Pictured: Photos provided by Raphael Lyon of the installation. And at bottom videos of a mobile by Lyon similar to the one I describe here as a "dragon eye"; Mudboy performing "Dubious Liftings" in Northampton this year (more about the music here); and an installation Lyon (he made the sculpture hanging from the ceiling) made with his brother Noah (he did the drawings on the wall) in Chicago last year. 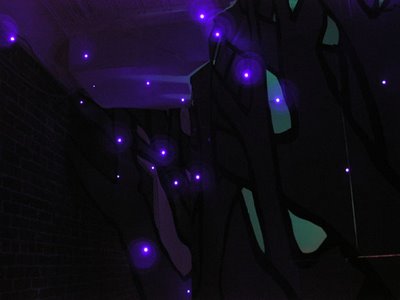 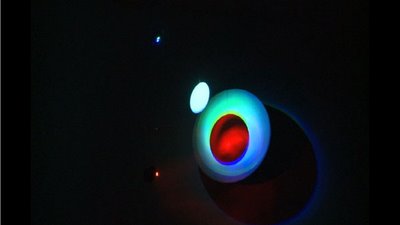 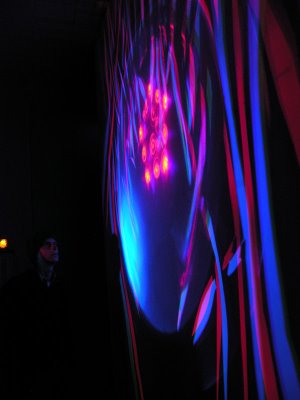 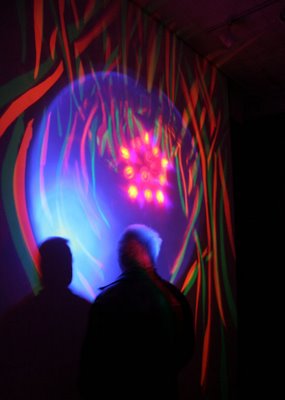 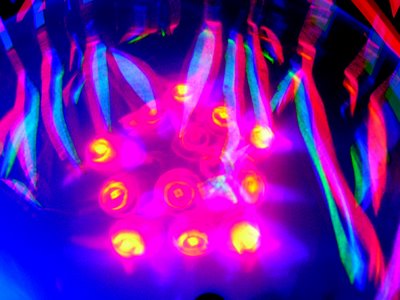 Plus: Boston as a photography town 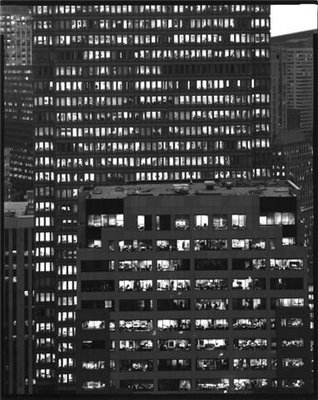 Photographer Nicholas Nixon of Brookline first burst onto the scene in the show "New Topographics." The 1975 exhibit at the George Eastman House in Rochester, New York, became known as a benchmark for the way it rounded up 10 artists to map a trend in landscape photography toward dispassionate, detached, understated, decidedly unromantic observation. Nixon's contribution included black-and-white photos of Boston cityscapes that he began taking from downtown rooftops after he moved here in 1974.

"I just sort of dealt with Boston like it was mountains and hillsides," Nixon tells me over the phone. They tend to be open uninflected vistas, showing the expanse of the city with skyscrapers jutting up here and there.

"Nicholas Nixon: 8x10 and 11x14," a then-and-now show at Carroll and Sons gallery, assembles a selection of this work alongside Boston cityscapes that Nixon has shot over the past decade. It's a welcome opportunity to catch up with the man who may be the city's most nationally renowned artist.

Plus how photography made O’Keeffe a star

Which we’ll use as an occasion to finally post this review of the Portland Museum of Art’s exhibit “Georgia O’Keeffe and the Camera” from last summer: 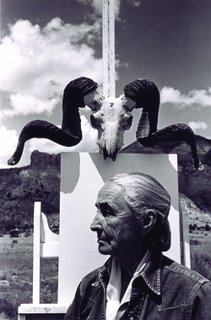 How did Georgia O’Keeffe become one of the most famous American artists of her era? Only Edward Hopper rivals her from the beginning of the 20th century to just after World War II, when Abstract Expressionism burst onto the scene.

Chalk it up to her catchy flowers and skulls, the richness of her lyrically abstracted realism, her singularity as a woman in a male-dominated (art) world – and photography. “Georgia O’Keeffe and the Camera: The Art of Identity” at the Portland Museum of Art sharply and convincingly argues that photography promoted her public persona and helped make O’Keeffe a household name.

It began in 1917 with her affair with New York dealer, taste-maker and photographer Alfred Stieglitz, when she was 29 and he 53 and married. They shacked up in 1918 and married (shortly after his divorce) in 1924.

Stieglitz – and the 350 photos he shot of O’Keeffe over 20 years – focused the art world’s attention on her. Early on he portrayed her close up, artfully buttoning her coat, or with her hair disheveled and semi-dressed as if she had just had sex. (The museum is overly polite by not including any of Stieglitz’s nudes of O’Keeffe.) She painted naked ladies and abstractions of luscious folds around cave-like openings. He published exhibition pamphlets saying she revealed “the intimacies of love’s juncture, with the purity and the absence of shame that lovers feel in their meeting.” Critics ran with it. 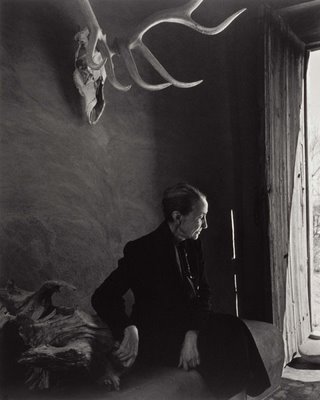 Her flower paintings were apparently her attempt to change the subject. “For her they were all exercises in formal composition,” says Portland Museum curator Susan Danly, who organized the show with Georgia O’Keeffe Museum curator Barbara Buhler Lynes. Observers just saw more of the same sensuality in the luscious petals and leaves of paintings like Corn, No. 2 (1924). It’s the only great painting in a show dominated by striking photography. The curators nicely pair canvases with photos (i.e. a painting hung next to a shot of it in O’Keeffe’s studio), but the paintings tend to illustrate points rather than showing O’Keeffe at her best.

Her public image finally shifted when she began summering in New Mexico in 1929, and painted arid mountains, scrawny trees and skulls (from sex to death). She moved there in 1949, three years after Stieglitz’s death.

In 1937, Ansel Adams photographed her smiling with a ranch hand. They are silhouetted against roiling clouds, like a shot from some Hollywood Western with O’Keeffe cast as a flinty pioneer – an American icon. She favored denim in her daily attire and late in life had a closet full of colorful Marimekko dresses, Danly says, but she cultivated her new stark, no-nonsense public image by often dressing in plain black and white when she was being photographed.

Big name photographers visited – Eliot Porter, Irving Penn. Philippe Halsman, Arnold Newman. They focused on her, her stark surroundings, her collections of rocks and bones. In 1956, Yousuf Karsh photographed her seated in profile in a dim room, lit by the sun from an open door at right. She holds onto a chunk of knotty wood while a skull hanging on the wall behind her watches over her. For the cover of Life magazine in 1967, John Loengard photographed her in profile on the roof of her home in front of a chimney that looks like a tombstone. Desert and sky open up behind her.

But America’s long been suspicions of powerful, independent ladies. Andy Warhol channeled this in his Halloween orange and black silkscreen of her from circa 1979, but you can already sense it in Karsh and Leonard’s shots. With all the black and bones, the photographers subtly transform her from plucky pioneer into her final public incarnation: old witch. 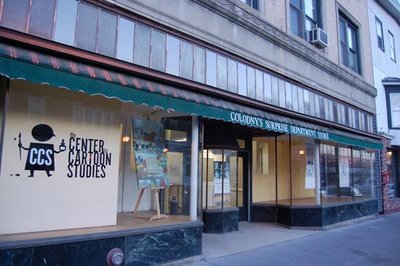 I visited The Center for Cartoon Studies in White River Junction, Vermont, in February. With the talent the school, which opened in September 2005, has brought together – among its students and its teachers – the future of comics likely starts here. Where else have so many cartoonists been brought together for so long to think about and rethink the medium?

Previously:
A visit to the Center for Cartoon Studies in 2007. 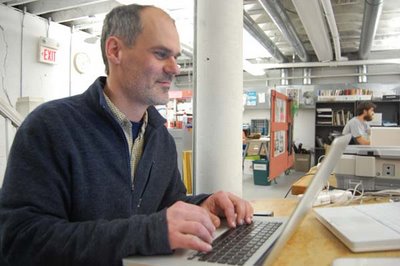 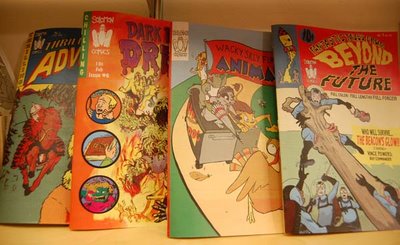 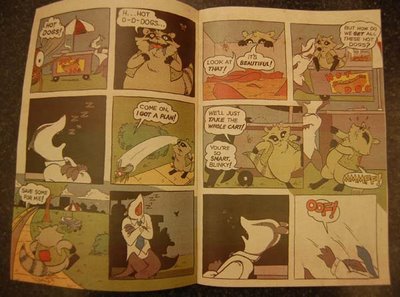 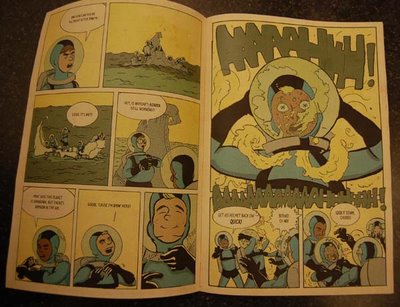 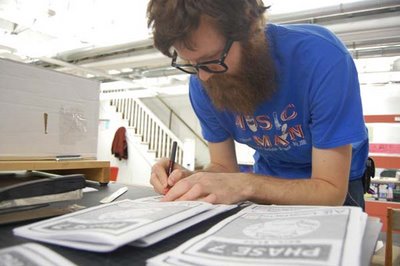 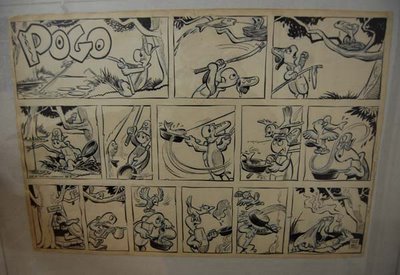 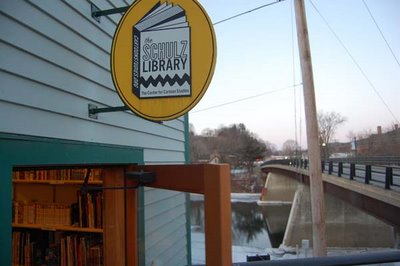