“…Would you stop trying to take down Western culture? Because frankly I will worship fucking Radiohead like gods if you people will just give up on trying to destroy civilization. I mean it.” – Thomas Garvey, commenting on The New England Journal of Aesthetic Research’s review of the Shepard Fairey show at the ICA. Read the rest, plus our shocking shocking confession, here. 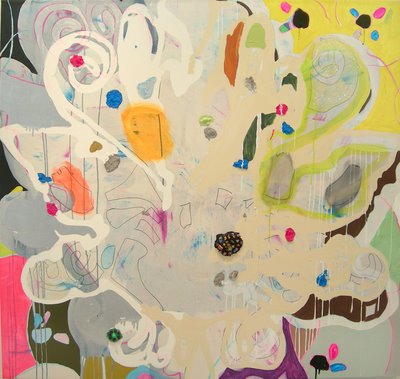 From my review of Laurel Sparks’s show “Pleasure Dome” at Howard Yezerski:

Jamaica Plain's Laurel Sparks has become one of our best local abstract painters, as her new collection of bright, fun, juicy, abstracted chandeliers at Howard Yezerski Gallery attests. They're all charming sweetness and decadence. (She calls them "portraits of glamour and decay.") And, boy, she has a way with paint.

Sparks appears to begin her compositions with meandering marker drawings outlining the shapes of chandeliers. On top, she slathers chalky acrylic paint, silver enamel, marble dust, glitter. The paint is by turns gritty or drippy. The compositions feel like coloring books joyously colored outside the lines. 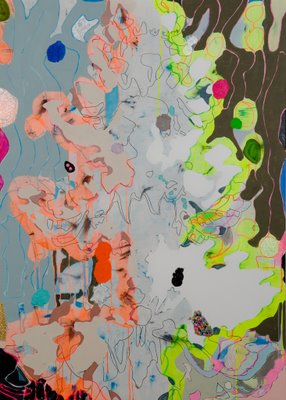 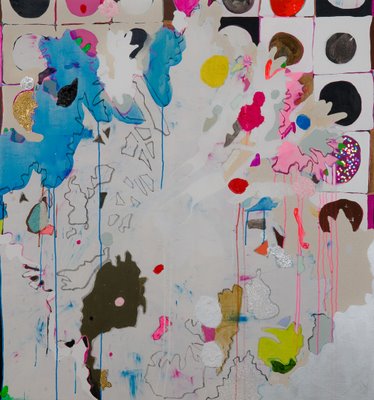 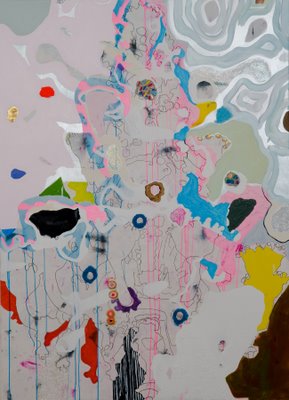 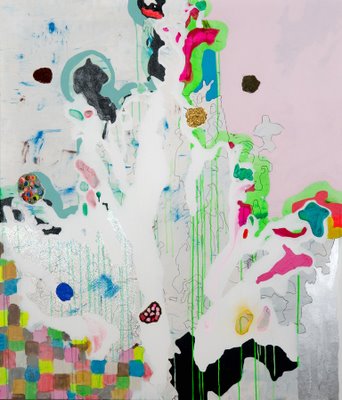 State funding for the New Hampshire State Council on the Arts would be cut in half, under a budget proposed by Governor John Lynch. Contributions to the arts agency’s budget would decline from of $882,000 in fiscal year 2009, which concludes at the end of June, to $448,000 for the next fiscal year, FY10, and $466,000 for the following fiscal year, the arts agency reports.

This is just the opening salvo in New Hampshire’s state budget preparations – the state House and Senate have yet to weigh in.

The federal stimulus bill approved over the past week includes additional funding for the National Endowment for the Arts. “That’s good news, obviously, but it’s hard to say how much that will affect us,” Jane Eklund, programs information officer for the New Hampshire State Council on the Arts, tells me.

Note that the proposed 50 percent cut in state funds means a corresponding 50 percent cut funding from the National Endowment for the Arts, since NEA grants to state arts agencies require a dollar for dollar match, the New Hampshire agency says.

The arts agency reports that the proposed cuts include cutting half of the agency’s staff of nine, including the position of director Rebecca Lawrence. It would also mean a significant cut for artists and organizations receiving funding from the agency, as about 55 percent of the agency’s revenues is redistributed in the form of grants or funding for arts programs.

Sixty-seven percent of the arts groups reported contributions were down, 63 percent said grant funding was decreasing, and 58 percent said ticket sales were down.

The Massachusetts Cultural Council just announced more than $1.3 million in arts grants under its “Adams Arts Program for the Creative Economy,” a program devoted to fostering economic activity and revitalizing communities via the arts.

The biggest winners are Arts Boston Inc., which gets $70,000 to develop a website promoting the arts in Boston; Cape & Islands Community Development Inc., which gets $65,000 to open new markets for local artisans by publishing a directory of their work that contractors in that area can use to interest clients in local handcrafts for their buildings; and The Center for Independent Documentary in Sharon, which gets $65,000 for training for local motion picture industry workers and to host a national conference in Boston.

Also notable are $4,000 to the community music workshop Zumix Inc. in East Boston to develop a new arts district there and $25,000 to the new media gallery Axiom in Jamaica Plain to develop an arts and business consortium to foster connections between the two and place artists in tech companies.

Rhode Island arts groups continue to see declines in donations and income from ticket sales as our economic crisis persists, according to a new survey (pdf) of 50 art organizations by the Rhode Island State Council on the Arts.

Sixty-eight percent of the groups report that things have gotten worse for them since October, when the state agency surveyed more than 30 Rhode Island arts groups. Now 78 percent say contributions to their organizations are down, compared to 72 percent in October. Also more arts organizations report that donors are reneging on pledged donations. Half of responders said ticket sales are down, but most report revenue from tickets is down because they are selling more discounted tickets.

The state arts council has set up a special website on “Economic Recovery and the Arts in Rhode Island” to document the effects of the economic crisis on the arts.