My review of “Momentum 12: Gerard Byrne” at Boston’s ICA:

Dublin artist Gerard Byrne's new exhibit, part of the ICA's "Momentum" series, is a playful conceptual-art riff on the Loch Ness Monster mystery. The installation comprises a slide show, a grainy silent film, audio of a guy reading what seem to be accounts of sightings of Nessie, text summaries of "sightings" pasted to a wall, and a tree stump. But mostly it's black-and-white photos depicting a strange ripple on the lake, driftwood, a swimmer's arm breaking through the water — all things that might be mistaken for a monster if you were so inclined. It's fun, but really Nessie is meant to help Byrne's æsthetic questions go down. And these questions — how do we see? how do we trick ourselves into seeing things that might not be there? — are old hat. 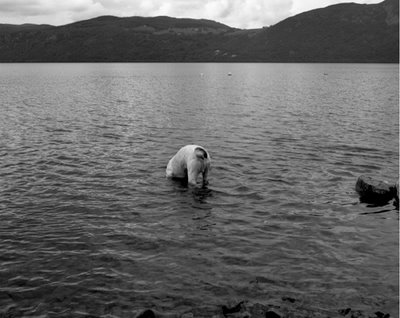 Just as we predicted.

“Andrew Witkin’s quiet installation suspends the boundary between the artistic and the everyday, simultaneously evoking a sense of isolation and a longing for connection,” ICA Director Jill Medvedow said in a press release.

Related:
Our review of the 2008 Foster Prize finalists exhibition, which continues through March 1, 2009.

Bread and Puppet at BCA next week 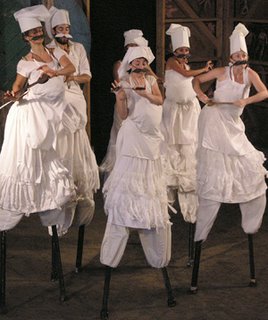 Bread and Puppet Theater of Glover, Vermont, presents its “Sourdough Philosophy Spectacle & Circus” in the Cyclorama at the Boston Center for the Arts, 539 Tremont St., Boston, next week. The theater, which was founded by Peter Schumann in the 1960s, is one of the great treasures of New England, and the United States. These Boston shows are (I believe) an outgrowth of shows they performed in Vermont last summer.

The troupe presents the “Sourdough Philosophy Spectacle,” a pageant for adults, at 7 each night from Thursday, Jan. 29, to Sunday, Feb. 1. They describe the show as “about the need for human fermentation. It takes a lesson from how apple cider is made. Our republic teases us with the possibility of democracy, but citizens are raised like military apple orchards, pruned down to their predictable minimums, yielding controlled fruits that lack the ecstasy of nature. However, human fermentation occurs in parts of the human body that are not governed by the government, like the guts and the gutsy parts of the brain. Fermented citizens are corrupted by the ecstasy of nature and from that corruption, derive strength to corrupt military-orchard citizens.”

Also, Schumann will speak at an opening reception for his visual art installation, “Auction Notice,” at the Cyclorama from 6 to 8 p.m. Monday, Jan. 26. The large paintings depict “the real story of a Haitian-American woman who received notice about her house being foreclosed and then being told about the death of her eldest son who was serving in the U.S. military.” The art show will be on view from 9 a.m. to 5 p.m. Tuesday to Friday, and on Saturday and Sunday for one hour before and after each matinee and evening performance.

Related:
• My September report on and photos of Bread and Puppet, its history, where its going, and the summer shows. Plus an interview with Peter Schumann.
• My report on Bread and Puppet’s “Storm Office,” which it performed in Providence in October. 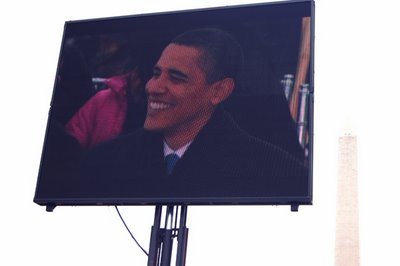 Here is coverage of Sunday, Monday and Inauguration Tuesday in Washington, D.C., by The New England Journal of Aesthetic Research’s Washington bureau chief. 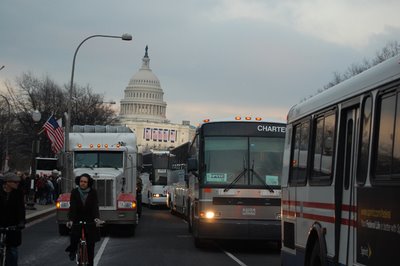 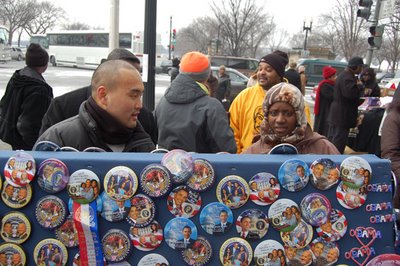 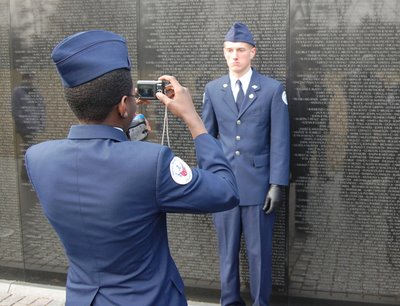 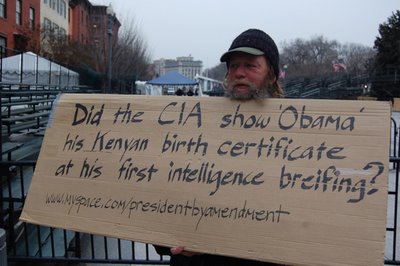 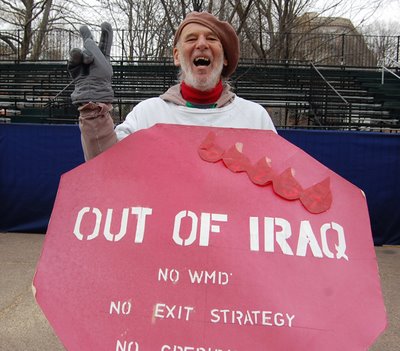 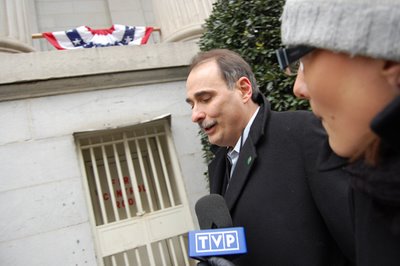 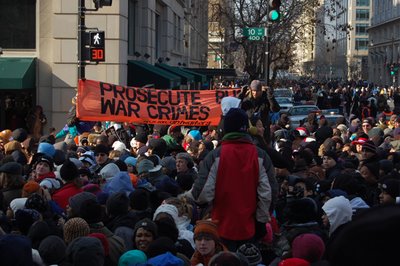 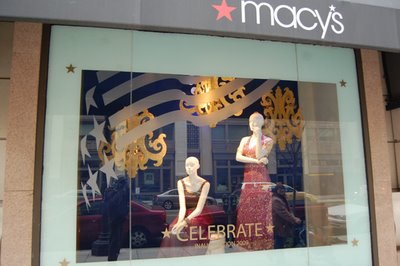 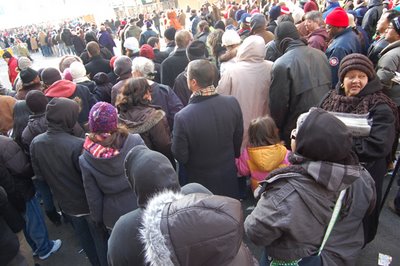 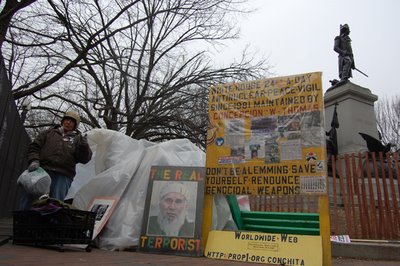 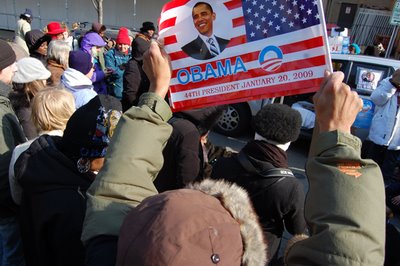 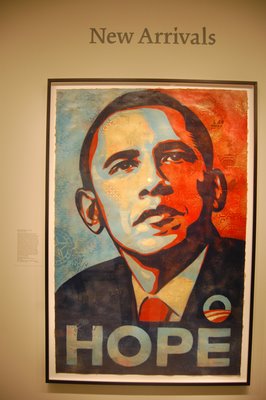 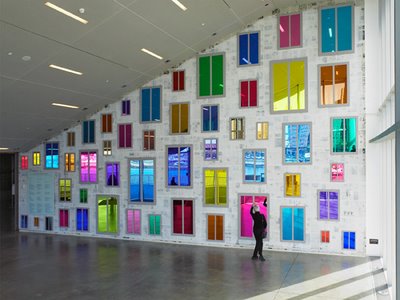 My review of “Ugo Rondinone: Clockwork for Oracles” at Boston’s ICA:

New York-based Swiss artist Ugo Rondinone's installation Clockwork for Oracle. He covered the large lobby "Art Wall" with newspapers, whitewashed it, and then hung 52 candy-colored mirrors on top. It certainly brightens up the joint, and it nicely directs your gaze toward the Boston skyline behind you (as well as toward a plaque on the wall listing ICA donors). But it's a sweet nothing.

“Mythic Creatures” at Museum of Science 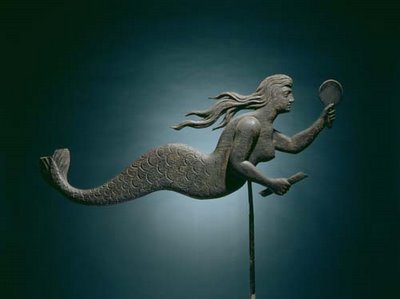 From my review of “Mythic Creatures” at Boston’s Museum of Science:

The Museum of Science offers “Mythic Creatures: Dragons, Unicorns & Mermaids,” an exploration of the crossroads of myth and science organized by New York’s American Museum of Natural History. It collects intriguing art and artifacts – a 16th century map of Iceland surrounded by sea monsters, folk paintings and beaded textiles depicting water spirits and mermaids, a Chinese parade dragon costume made in Hong Kong and performed on the streets of New York. It tells how elephant bones and Prehistoric fossils were mistaken for giants, dragons and griffons. (While you’re at the museum, check out the rare, nearly-complete real triceratops skeleton that was unveiled downstairs in November.) And there are interesting facts: Did you know that the depiction of unicorn horns became standardized based on narwhal tusks sold at European markets in the Middle Ages? 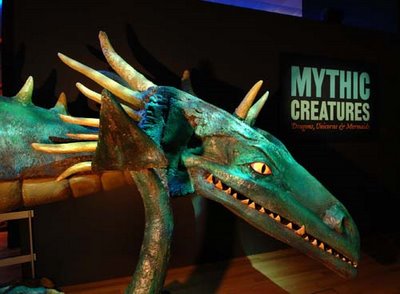 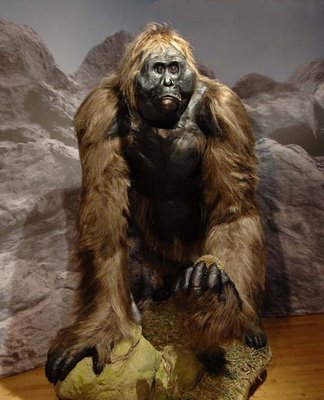 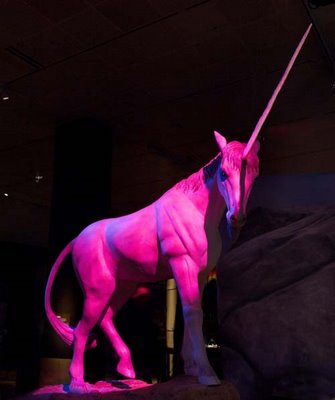 Will an artist be on the landmark council?

The Massachusetts Creative Economy Council, billed as the first such state-level council in the U.S., is scheduled to hold its first meeting at 2 p.m. Thursday, Jan. 29, at Boston’s Institute of Contemporary Art.

The big outstanding question is whether any artist will have a seat on the 25-member board, because the establishing legislation, which Governor Deval Patrick signed into law in October, left out any guaranteed seat for the architects, artists, filmmakers, computer-game creators, designers, and advertising folks it defines as the creative part of the creative economy.

So who is being appointed?

“The appointment process is still underway,” Rachael Liebert, a spokeswoman for the state Executive Office of Housing and Economic Development, which hosts the council, wrote to me Thursday. “We’ll let you know as soon as any appointments are announced.” (If you know who will be on the Creative Economy Council, drop me a line.)

ICA director Jill Medvedow, who chaired the governor’s creative economy transition team in the months after Patrick was elected in 2006, is scheduled to welcome the council at the start of the meeting, but no one from the ICA is being appointed to the council, according to the ICA.

Much rests on that seat for "an owner of a sole proprietorship in the creative economy.” It may be the only spot on the committee where artists and designers could get direct representation on the state board set up to support their field. If not one creative maker gets on the 25-member council, it will be a disgrace.

Democratic representative Daniel Bosley of North Adams, a longtime creative economy supporter who sponsored the bill, told me last fall that "There will be artists on the thing.” He predicted that Patrick will use his discretionary appointments to name designers or artists. The bill doesn’t seem to offer any discretionary spots beyond the one for the “sole proprietorship” person, but the wording is confusing so it’s hard to tell.

"If it doesn't work out and they don't get a seat at the table,” Bosley told me then, “we can always enlarge it.”