Yokelist Manifesto 6: Could the CIA help? 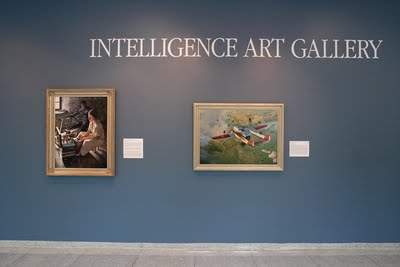 It's not much talked about in the art world, but from the 1930s to the ‘60s, the CIA, U.S. State Department, and U.S. Information Agency – with help from New York’s Museum of Modern Art and major American corporations – organized exhibitions of avant-garde American art in Europe and Latin America to exemplify the benefits of American-style democracy, capitalism and freedom. These cultural diplomacy programs were a sort of classy American propaganda, aimed at countering the spread of communist Soviet influence during the Cold War. But they were also key in showing, as MoMA leaders said, “that America was not the cultural backwater,” in promoting New York artists, and in establishing that city as the post-war world capital of art.

Maybe we need the CIA’s help in promoting the best of New England art today.

The art world tells a fairy tale that the best art prevails on its own because the art world is some sort of meritocracy. And, by corollary, New England art doesn’t prevail because it is provincial junk. But that’s not true. Most artists that rise to the top – institutionally, economically – do so because they’ve gotten the support of a huge infrastructure that incubates and champions their work – and then aims to profit off it.

New York didn’t just become the capital of art at midcentury because it had good artists. It claimed that spot because it had the backing of major institutions, including, amazingly enough, the CIA, that made it their mission to promote New York art to the world. It helped that the art was good. And it helped that the former capitals of Western art – Paris and Berlin – were shattered by a world war. But the promotional infrastructure played a key part – and still plays a major part.

I expect the CIA won’t come to New England’s aid. So we’ll have to do this ourselves. Our local institutions – our museums, schools, news media – need to engage more with art made here. And shows of local art organized here need to tour to museums outside the region. Looking to the example of those midcentury cultural diplomacy exhibitions, I propose a New England exhibition exchange program. For example, DeCordova Sculpture Park + Museum in Lincoln, Boston’s Institute of Contemporary Art and the Portland Museum of Art organize annuals and biennials championing exciting art made in New England, but how many people outside the region see them? How many people outside of the towns they’re in see them? I propose that these shows be swapped across New England, and then also swapped with regional art roundups from, say, Seattle, Los Angeles, San Francisco, Houston, Chicago, Philadelphia. If you need a model, look at a similar program that local curators already often tap when looking for artists to fill our museums – it’s the New York-centered Circuit of art biennials, art fairs, art auctions and New York museums and galleries.

Over and over you hear it said that we live in a global art world, but so much of art world success still depends on where you live, on your geographic proximity to that art world infrastructure. A third of the artists featured in Phaidon’s major new art world survey book “Painting Today” reside in New York. Not just show in New York – reside in New York. If that’s not successful provincialism, what is?

If the main mode for art world success remains living in New York, we might as well all give up here. But the decentralized nature of the Internet offers a new model for how the art world can work. We can become art localvores. We can build institutions that incubate and champion art made here. We can found our own circuit with other local yokels in supposed cultural backwaters off the Circuit’s beaten path.

Some will talk of the dangers of provincialism, but look at how well provincialism did for New York, which is an example of how to be provincial while still maintaining high aesthetic standards. If we don’t risk the pitfalls of being proudly provincial – let’s call it Yokelism – then we’re just supporting a status quo that says we don’t, won’t ever matter.

Pictured at top: The CIA's Intelligence Art Gallery, for real.

David Rich here. I've been following your posts on Yokelism, and your most recent one, on the CIA, gives me the easiest point of entry, so to speak, to respond. The CIA promoted art not merely to demonstrate a kind of cultural superiority -- the vital issue was what kind of art. The CIA supported art, not merely to glorify the cultural superiority of New York, but to promote a certain kind of art that glorified the assertion of the individual, through the individuated psychology of abstract expressionism, or the supposedly unique fingerprint of action painting, breaking through structure and form, rather than figurative Soviet art and socialist realism. Rather than a generalized call for supporting the New England art market, "the scene," I would love to see you write about what is at stake, ideationally, culturally, politically, in the different kinds of art being produced in Boston; and I would further love to see some kind of cartography or topography -- not of museums but of artists and artist-circles. I know that art journalism is built on gallery openings, museum exhibits, and special events, but in the flurry of that reporting I am at a loss to say, if asked, what might be happening in Boston, who the major figures are, and what aesthetics, ideas or politics their art is dedicated to. Some kind of map might be of extraordinary value -- and this is something that reporters like Sebastian Smee are unable to provide in their columns. Overviews, histories, and essays. You mentioned Clement Greenberg. He did not set out to valorize New York, although there is certainly Manhattan glamour to what he wrote, but he wrote to get in front of and explicate a scene that was exciting, that expresed theories of the mind, of pscyhology, ontology, phenomenology, and art. And I fear you might be painted into a rhetorical corner, as some sort of chamber of commerce type promoter of the local (which you are not), if you do not emphasize the urgency and the import of artistic ideas and trends situated in Boston -- rather than the more broadly articulated challenge to the regional "scene" and "market."

As always, my best to you and yours,
David

Here are some of our attempts to chart the New England scene: