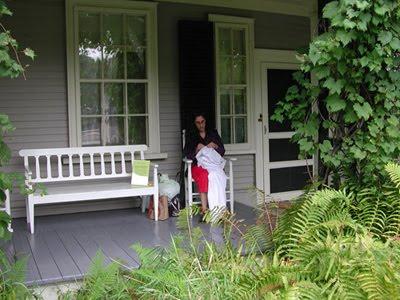 For years, Boston conceptual artist Kathleen Bitetti has explored the distance between the myth and reality of womanhood in contemporary America. After getting deep into health reform advocacy in the past few years, her just-closed exhibit “Containment 2009” at Emmanuel College in Boston (where she is gallery director) catches her at the beginning of a new project investigating historical connections stretching out from her hometown of Quincy, Massachusetts. 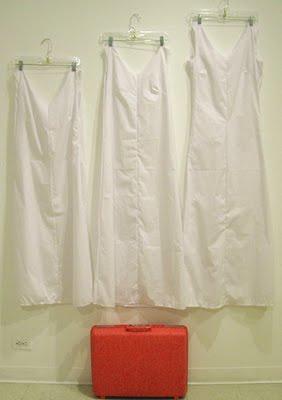 Bitetti’s 2005 to ‘08 “Royal Traveler: The Barbie Project” included “Sewing for Abigail” (pictured at left), which involved sewing three white slips based on the measurements of Abigail Adams, Barbie dolls, and Bitetti’s alter ego Princess Sophia. It speaks of how the artist herself – as a stand-in for ourselves – literally measures up to these two American role models. Bitetti’s 1992 to 2002 project “He Was Prince Charming at First…” is a collection of romance novels, Disney “Cinderella” and “Snow White” books, a rules sheet from a battered women’s shelter, a toy “magic mirror,” and the books “Ideal Marriage” and “The Frailty Myth: Women Approaching Physical Equality.” The objects add up to questions about the power and security of women. “Most princesses in fairy tales,” Bitetti, as alter ego Princes Sophia Solar Michalski, notes, “are on the run, are targets of assassination, or being stalked, and/or are victims of domestic violence.”

“Diplomat” (2008-09) aims to turn her tireless advocacy for artists and state healthcare reform into art by moving it into a gallery context. Grip-and-grin type photos show Bitetti as her alter ego Princess Sophia meeting with politicians, state health care boards, artists and curators – though there is no obvious difference here in how Bitetti and her alter ego look or act. Her 2008 to 2009 “Health Care for Artists: A Fairy Tale Scrap Book” retells the story of her health care advocacy as a stereotypical fairy tale.

A key antecedent for artists exploring their day jobs as art is Mierle Landerman Ukeles’s feminist performances of the 1970s, which recontextualized her labors as a housewife into art. When Ukeles, who will be speaking at Smith College in February, washed the grand front stairs of Hartford’s Wadsworth Atheneum or set up house in museums, the move of her housework from the private sphere of the home into the public sphere of the museum made what is often hidden labor public. This combined with the change in scale pointed to the way housework is undervalued. But when Bitetti recontextalizes her political lobbying, the reframing is not yet enough to push our focus on the day job into more expansive thinking about the philosophical implications of it all. In the ’60s, Jasper Johns wrote a recipe for art: “Take an object. Do something to it. Do something else to it.” What might be missing for Bitetti is the second step. Ukeles changed both the venue and scale of her work, Bitetti just shifts venues. 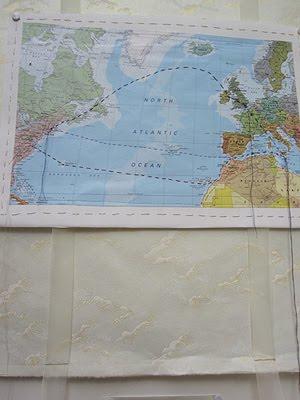 Bitetti’s latest project “Royal Traveler – Crossings: Malta” (2009) comes out of a residency she had this October on the Mediterranean island of Malta. She delves into historical connections between Malta and Massachusetts. Concord’s Ralph Waldo Emerson sailed to Malta from Boston in 1832. And in 1945, President Franklin Roosevelt steamed to Malta aboard the USS Quincy (as in Quincy, Massachusetts) and then flew from there to Yalta to plan the end of World War II with Britain’s Winston Churchill and the Soviet Union’s Josef Stalin. Bitetti presents a map of the routes (left) and a vintage suitcase packed with some of the stuff she carried along to her residency – wood, coffee beans, sugar, etc. – inspired by the cargo carried aboard the ship Emerson sailed on. Bitetti’s projects often are built upon rich research, but here it feels like she’s grasping for connections rather than discovering existing resonances in the histories that reveal new insights. But Bitetti is just beginning the project, so perhaps the connections will grow more resonant as she continues on.

Um, excuse me, but since when has illustrating a personal journal of psychiatric and personal issues become art? How does this relate to humanity? What does this have to do with anything beyond whining?

Art is what an artist makes it to be - be it an illustration of "a personal journal of psychiatric and personal issues", or a beautiful landscape of mind, or simply just the transcription of the landscape without adding any thoughts. As an artist myself, I tend to look away from the ugliness of life instead of looking right into it as Kathleen Bitteti. Bravo, quite a courage to face the inequality of women in society and express it publicly in museum to raise the awareness.