Brandeis University President Jehuda Reinharz’s announcement of his resignation last week is part of an administrative exodus from the Waltham school – including the school’s top financial leader. The departures come in the wake of a financial crisis at the university and international criticism of school leaders' January threat to close Brandeis’s Rose Art Museum and sell off its collection.

“It would be inaccurate to suggest that they are somehow related, or should be tied to the global financial situation or to the museum issue,” Brandeis spokesman Dennis Nealon tells The New England Journal of Aesthetic Research. “These are situations where people were ready to retire or found opportunities that built on their work at Brandeis and were just more of personal career type decisions.”

The departures were previously reported in the school’s student newspaper The Justice. 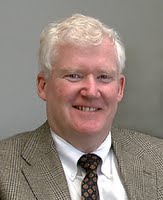 Peter French (pictured here), Brandeis’s chief operating officer for the past 12 years is retiring this month, though he is expected to stay on in an advisory role through December. French has been a key public spokesman for Brandeis about the financial crisis facing the school.

He is being replaced by Jeff Apfel, who was vice president for administration and chief financial officer at Rutgers University until 2007 when he took a job as chief operating officer at the Boston law firm Ropes & Gray.

Vice President of Financial Affairs Maureen Murphy left the school in August after 12 years at Brandeis to become an associate vice chancellor and chief financial officer at New York University’s branch in Dubai.

Dean of Admissions Gil Villanueva left Brandeis in July, where he has worked since 2005, to start as dean of admissions at the University of Richmond on July 15.

Senior Vice President of Communications Lorna Miles left over the summer, after working at the school since 2003, to become chief marketing officer at the Holocaust Museum in Washington, D.C., in July.

Regarding the threats to the Rose, Nealon insists, “While that decision and the process back in January has been much publicized, people have to remember that nothing has changed.” This seems to overlook, for example, that Rose Director Michael Rush and an administrative manager were forced out. But Nealon continues, “There has been no ultimate decision to close the museum or part with any of the artworks there. … Lost in all of this is we’re talking about an initial decision process, but not acted on as a result of that decision. Which was retracted and reviewed, and is still being reviewed. But nothing has happened, nothing has changed. The museum is fully open and functioning. And there is every intention to have exhibits. … There are no plans to sell work. No one is saying that would never ever happen. That issue is entirely the jurisdiction of the board of trustees. And it will not say that it is never going to happen, or it will happen.”