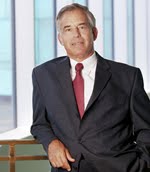 Brandeis University President Jehuda Reinharz yesterday announced that he will resign after leading the Waltham school sine 1994. Reinharz, who led the charge to shut down the school’s Rose Art Museum and sell off its collection, sent a letter to the school’s trustees on Aug. 31 announcing his intention. He is expected to serve out this school year and then leave either when a successor is selected or by June 20, 2010.

The school announced that trustees “in an unprecedented vote of support for President Reinharz, has requested that he continue working with the board and the university in the role as president emeritus, following the appointment of a new president.”

“I feel strongly that this is the right time for me personally to move on to a new challenge,” he wrote in the Aug. 31 letter. “Many of the goals that I set out for my presidency have been accomplished. I will leave the University in good condition with a strong foundation on which to build in the future. The Brandeis of today is significantly different than it was sixteen years ago. It is a stronger brand, with a national and international reputation for academic excellence.”

Reinharz formally announced his resignation in a note to the Brandeis community yesterday. “Following the completion of my term as President of Brandeis, I expect to be the president of a significant foundation, where I can address issues facing the Jewish community at the national and international level,” he wrote. “Serving Brandeis for nearly three decades has been a great honor, which I have enjoyed immensely. Ours is an active, engaged community; one that is both intellectually strong and fiercely passionate; it is one that has never failed to make me proud to be a part of Brandeis. I believe the future is very bright for the University and I am confident that my successor will take Brandeis to even greater heights.”