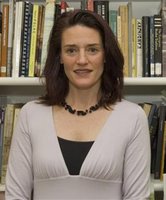 Jay A. Clarke (left) has been named the Manton Curator of Prints, Drawings, and Photographs at the Clark Art Institute in Williamstown, Massachusetts. She is expected to begin work on May 4. She arrives from the Art Institute of Chicago, where she was an associate curator of prints and drawings. She has taught at the School of the Art Institute of Chicago and Brown University. Here she fills the shoes of James A. Ganz, who left last year to be a graphic arts curator at the Fine Arts Museums of San Francisco.

Patricia Hickson began work as the Emily Hall Tremaine Curator of Contemporary Art at the Wadsworth Atheneum in Hartford during the second week of March. She comes from the Des Moines Art Center, where she was curator and program manager for the Des Moines Art Center Downtown. The Wadsworth position she fills had been left vacant for a few years, according to a spokeswoman for the institution. Hickson previously held curatorial positions at the Williams College Museum of Art, the San Jose Museum of Art, and the Institute of Contemporary Art Boston.