Turbulence, the Boston- and New York-based nonprofit patron of web and new media art, says it is facing a severe budget crunch that could mean its end if it doesn't secure additional funding. Unable so far to raise sufficient operating money for 2009, co-director Jo-Anne Green says, “It’s likely we’re going to have to close the organization or at least go into a hiatus until things turn around.”

Turbulence was launched in 1996, as an outgrowth of New Radio and Performing Arts, which Turbulence co-director Helen Thorington founded in 1981 to foster experimental radio and sound art. Turbulence has commissioned over 160 web artworks, as well as, more recently, art for mobile electronic devices It archives many of these projects on its server. It also organizes talks, symposia, performances and exhibits. A good number of its commissions have wound up in prestigious forums like the Whitney Biennial and the annual Austrian new media festival Ars Electronica.

“Besides being of regional importance, Turbulence is also internationally important. It’s the only place extant where web art is commissioned, that gives that work a home and gives the entire movement a chance to grow,” says George Fifield, the founder of the Boston Cyberarts Festival and a former curator at the DeCordova Museum. He adds, “the archive is invaluable.”

Many in the arts are hurting financially these days. Last year saw 11 Boston-area galleries close. And the economy has continued to sour. Art galleries and institutions as well as governments and foundations have taken financial hits. This seems to be only the beginning. I wouldn’t be surprised to see two or three more local galleries shutter in 2009. 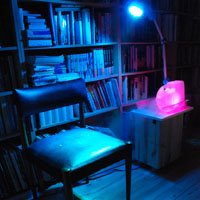 “We’ve been struggling [financially] for a long time,” Green says. Money dried up, she says, as states cut arts funding after the Sept. 11 terrorist attacks. Major grants from the Andy Warhol Foundation and the New York State Music Fund between 2003 and ’07 helped. But new media, Green says, “is still considered a fringe activity” and has never been well supported by foundations.

At the end of December, Turbulence sent e-mails seeking donations, and warning: “As we look at 2009, there is real uncertainty about our organization’s survival. Faced with rapidly declining funds, we must either require a membership fee – thereby blocking public access to our sites; or we must take them all offline … We do not wish to do either.”

In response, Green says they received an outpouring of support – a mix of donations and letters of encouragement. But she says, “it’s still not enough to actually save us.” (To make a donation, contact Turbulence here.)

But for 2009, Green says, they’re struggling to raise $60,000 to $70,000 for bare bones operating budget. That, she says, would support full-time work by her and Thorington, plus four hours of work each week by a system administrator and web hosting fees. It wouldn’t pay for any new commissions. Yet, Green says, “We’re not even halfway there.”

Turbulence plans to offer its Floating Points symposium at Emerson College in March, exhibit commissions at Pace Digital Gallery in New York in April, launch additional commissions in May, and has scheduled “Upgrade! Boston” talks at MassArt through summer.

“In the middle of the year, probably June or July, we’ll probably make a decision to go on hiatus,” Green says. One hope for rescue is that the Obama Administration will increase funding for the arts, and the states, which will in turn fund Turbulence. “In the meantime, we’re looking at a number of strategies to save our organization.”