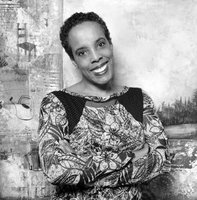 Cheryl Warrick, a 52-year-old painter from Jamaica Plain, tells me that she’s been appointed to the new Massachusetts Creative Economy Council, filling the spot dedicated to "an owner of a sole proprietorship in the creative economy."

Which would mean that artists will get direct representation on the landmark 25-member council, billed as the first such state-level creative economy council in the U.S. Yes!

However, Kofi Jones, a spokesperson for the state Executive Office of Housing and Economic Development which hosts the council, declined to confirm this. “The Council members will be announced at the meeting on the 29th,” she wrote to me. “We are not prepared to discuss the members until that time.” (Why is this a secret?)

The legislation creating the council was worded in a way that it did not require artists or designers to get a seat – so there was a worry that creative makers would not be directly represented.

The council is scheduled to hold its first meeting at 2 p.m. Thursday at Boston’s ICA.

“I’m hoping to be the voice for the independent artist creative person,” Warrick tells me. Noting the international economic crisis, she adds, “It’s a pretty daunting task right now, for everyone.”

“The creative economy is many things and we have to have a wide net,” she says, namely taping the skills and knowledge of people of diverse backgrounds and experience. “I think that is creative, that has a lot of potential. And that’s what we have to do in this economy.”

Warrick is known for her “landscape-based abstractions,” as she describes them, which have been seen at Gallery Naga in Boston and many other galleries. “They’re really about the search for wisdom, and how we make meaning.”

She graduated from MassArt in 1988, and chairs the Boston art college’s board. She says she worked for many years as a registered nurse, before being able to devote herself exclusively to her art in 1996. With the way the economy is these days, she’s also trying to develop a sideline as an illustrator.

This is good news- Congratulations to Cheryl. Could Massachusetts also be the first state to pass legislation for artists to receive a percentage of all future sales of their work or fair market value of their donations? One can only hope.