“This is Boston, Not LA” at LaMontagne 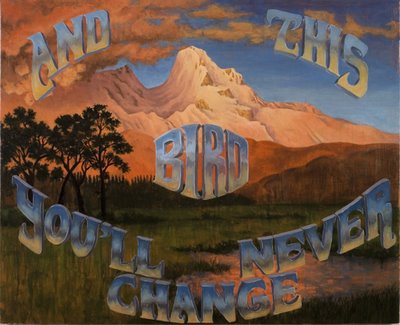 From my review of “This is Boston, Not LA” at LaMontagne Gallery in Boston:

In 1982, a group of Boston-area hardcore punk bands released what would turn out to be a landmark compilation album, “This Is Boston, Not L.A.” The hardcore scene was very territorial, and the title of the album, taken from the Freeze song on the record, was seen as a challenge and an F-you to the prominence of Los Angeles and Washington hardcore, as well as a call to Bostonians to assert their own local (musical) identity. Now comes “This Is Boston, Not LA” at LaMontagne Gallery to take up that old title as a sort of manifesto of what Boston art can be.

There are three modus operandi that Boston artists bunch around today: deadpan set-up photos; new-media explorations; and rigorous conceptually driven installations, often with video of a performance. There are outliers, of course, and the visionary expressionist painting that began here in the ’30s continues, and a cluster of lush decorative pattern painters is forming. But the photo, new-media, and installation folks are most prominent. And they weight the scene toward an æsthetic that’s serious and angsty. …

The 22-artist line-up of “This Is Boston, Not LA” suggests a different Boston art (though note that a number of the artists are former Bostonians), a scene fueled by rock and roll and ’80s nostalgia that includes Larry Bird’s Celtics and the sort of murals you might have painted on the side of your tricked-out van back then. The big difference is attitude. It’s a vision of a Boston scene that makes you want to throw up your hands and flash the devil’s-horns salute: yes!

Pictured from top to bottom: Joe Wardwell of Boston, “You’ll Change”; Samantha Moyer of Brooklyn, “Untitled (hollywood to hanover)”; Rebecca Gordon of Chicago, “Rock, Pop, Classic”; Derek Aylward of Dedham, “Red” and “Robert, Kevin, Danny, Larry, Dennis”; Eddie Martinez of Brooklyn, “it’s up to you and me brotha”; plus installation shots of “This is Boston, Not LA.” 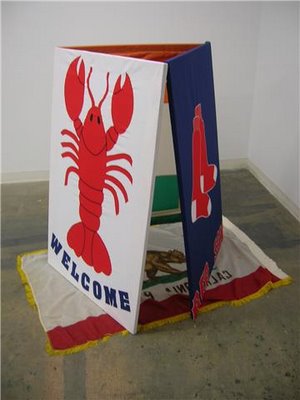 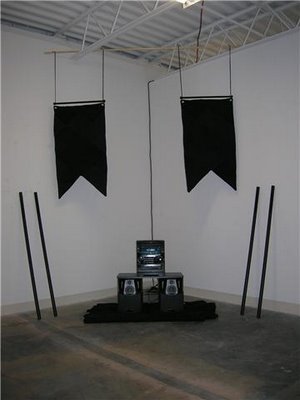 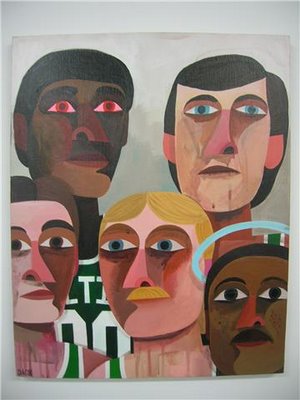 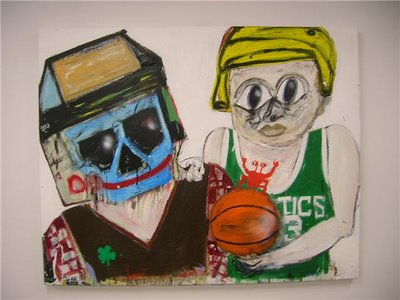 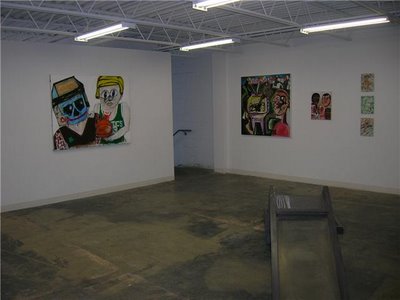 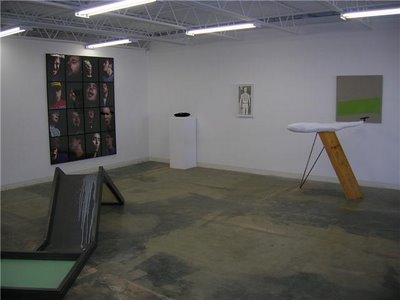 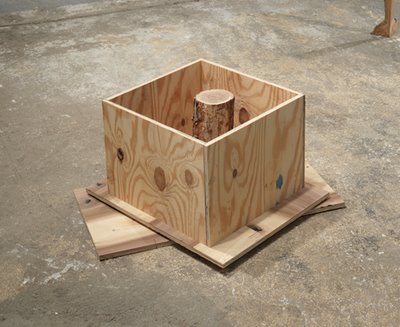 I touch on recent sculptures by Bostonian Taylor Davis, who won the 2001 ICA Artist Prize and was included in the 2004 Whitney Biennial, in this review:

She comes out of classic hardcore Minimalism, making stuff like a wood-and-mirrors version of a typical shipping pallet. Her current show at Samson Projects, “N W rk Ab t,” offers esoteric sculpture on the edge between art and carpentry: an iron rod rising up from two crossed wood planks; a plywood screen; a beaver-gnawed log inside a spinnable wood box; a log milled flat on two sides but otherwise left raw. It epitomizes a certain branch of Boston art (the kind that, say, the ICA tends to reward): cold, rigorous, smart, dry, and (too often) kind of boring. 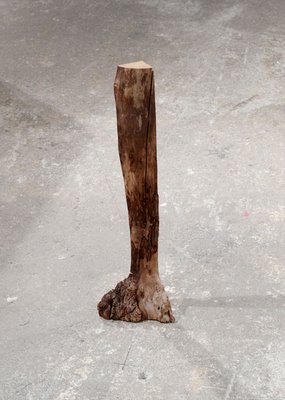 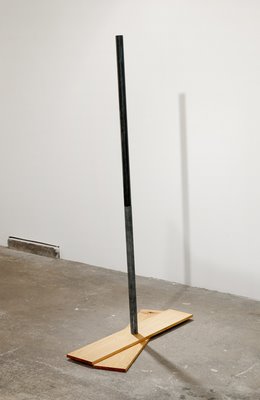 A tour guide at Boston's Institute of Contemporary Art broke Joe Zane’s sculpture “Tulip Head,” which was on view in the museum’s Foster Prize exhibit, by bumping into the pedestal on which it stood, according to the museum.

“The accident occurred during a tour of the Foster Prize exhibition when one of our guides backed into the piece and it fell from its pedestal,” a museum spokeswoman writes. The glass sculpture, which had been stuck to the pedestal with wax, shattered on the gallery floor.

“We terribly regret this happened, and of course we are compensating the artist for the lost work,” the ICA spokeswoman writes.

The ICA says the sculpture (pictured at top left) was broken on Nov. 13, the day after the exhibit, which the museum promotes as “key to the ICA's efforts to nurture and recognize Boston-area artists of exceptional promise," opened to the public.

Zane had valued the original sculpture, a glass vase (its silhouette is based on the Cambridge conceptual artist’s own profile) filled with glass flowers, at $7,000. He tells me the original “took me 3 1/2 months to make,” but he was able to make a replacement “after a little over two weeks of nearly non-stop work.” He says the process of making the vase is extremely complicated and delicate. It involves creating a clay model, casting multiple molds, and then having a glass blower cast a vase from the molds. But, he says, the molds or the glass inside often fracture. To create the new sculpture (pictured top right), Zane says, “I made 4 molds. I got ONE vase.” The museum reports that the new piece has been on view since Nov. 28.

“The new piece is called ‘Doppelganger’ (in staying with the themes of the show) and is similar but different from ‘Tulip Head,’” Zane says. “It's not a copy or an exact double, it's a doppelganger. For one thing, it has no tulips in it. It also has almost the double the amount of flowers, the design is slightly different (the top is a little taller and the base on the bottom extends out more). It is also clear glass, not sandblasted. So it is more spectral than ‘Tulip Head.’”

Zane, whose work is described by the ICA as “bold probing of essential questions that circulate around the making and presentation of art,” is one of four finalists for the ICA’s $25,000 Foster Prize whose work is on view at the museum through March 1. The winner of the award is expected to be announced early next year. (The three others get $1,500 consolation prizes.) 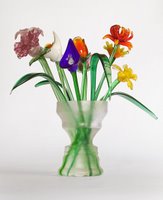 Joe Zane’s sculpture “Tulip Head” (pictured at left), which was on view in the Boston Institute of Contemporary Art’s Foster Prize exhibit, was broken there on Nov. 13 due to “an unfortunate accident in the gallery,” according to a spokeswoman for the museum. The sculpture, a glass vase (its silhouette is based on the Cambridge conceptual artist’s profile) filled with glass flowers, had been anchored atop a pedestal in the middle of a gallery. The museum reports that Zane “created a new original piece,” which has been on view since Nov. 28.

Margaret Burgess has been named associate curator of Modern and European art at the Portland Museum of Art in Maine. She is expected to begin work there in January.

Burgess previously worked as a research fellow at the Corcoran Gallery of Art in Washington, D.C.; as a curatorial fellow at the Cleveland Museum of Art; at Buckingham Palace in London, England; and some other wonderful places. 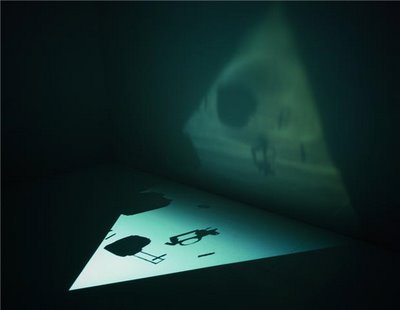 From my review of “Paul Chan: Three Easy Pieces” at Harvard’s Carpenter Center:

Among the most poetic and moving artwork to come out of 9/11 is Paul Chan's series of videos “The 7 Lights .” Most other major works addressing the attacks are documentary — Joel Meyerowitz's photos of the wreckage at Ground Zero, Paul Greengrass's 2006 film re-enactment “United 93.” But Chan's videos, which he began making in 2005, distill the feeling and the meaning of that day into charged symbolic elegies. And they've propelled him to art stardom — a solo survey at New York's New Museum, major profiles in The New Yorker and The New York Times.

"Three Easy Pieces" at Harvard's Carpenter Center offers one of his 9/11 pieces plus two other videos about war. “5th Light,” a triangle of light projected onto the floor, seems like sun from a window. Shadows of leafy branches, wiggling wires, chunks of who knows what drift across the floor toward the gallery wall. Then a shock as a body plummets from the sky. Then more people fall. 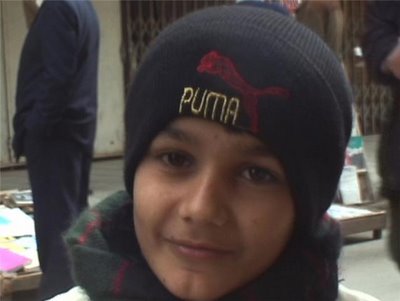 Berwick Research Institute, the Boston-based nonprofit experimental art “incubator,” has named Leon Johnson as its first director-in-residence, and Daniel DeLuca and Ryan Sciaino as coordinators of its “special projects incubator.”

Johnson, of Portland, Maine, will take over from Meg Rotzel, who co-founded and led the Berwick as director from 2000 to 2006. Berwick explains: “Taking a cue from it’s own research-oriented history, the Berwick extends its eight years of experience supporting unconventional creative practices into the arena of experimental arts administration. Director-in-residence names a new position taking equal inspiration from the traditional role of an Executive director and from the contained tenure and supported experimentation associated with an artist residency; a twenty-four month residency in which the DiR takes the reins and asks the organization itself to become the creative experiment.”

DeLuca and Sciaino will lead Berwick’s “special projects incubator,” which Berwick describes with its trademark clarity as “a laboratory for emerging curators, organizers and artists developing projects that draw from multiple genres to create innovative idea-driven work, this division of the Berwick supports a three-tiered incubation program and hosts seasonal events that explore a variety of event forms and content and create a context for collaborations and dialog between art organizations and local communities.”

Background on the gentlemen, and more, is here.