From my review of Tara Donovan at Boston’s ICA:

Turn the corner into one of the final galleries of Tara Donovan’s new show at the Institute of Contemporary Art and you come upon a giant cell-like thing bulging and bubbling down from the ceiling. Its ingredients sound mundane: "Untitled (Styrofoam Cups)" (2004/2008) features hundreds of Styrofoam cups hot-glued side to side and hung from above. But somehow these cups — and you can always tell they’re cups — become something else. They’re lit from behind so they seem to glow. And as you walk below them, they resemble clouds or, as Donovan has said, “ice that covers a lake or ocean, but you’re underneath that ice, looking up.”

Last month, the Brooklyn sculptor was named a MacArthur Fellow — that is, she received what’s known as the $500,000 “genius grant.” Here you can see why: her sculptures are filled with surprises as she finds the extraordinary in the ordinary, turning masses of quotidian materials like styrofoam cups into gee-whiz sculptures resembling bubbles, rocks, seas, and other forces of nature. They seem like something dreamed up by a mad-scientist Martha Stewart tinkering in her cellar late at night. They radiate the satisfying certainty that of course disposable cups or toothpicks or drinking straws have this amazing secret life when they’re not working their day jobs, and that of course this is what they were always meant to do even though you’ve never seen them do it before. 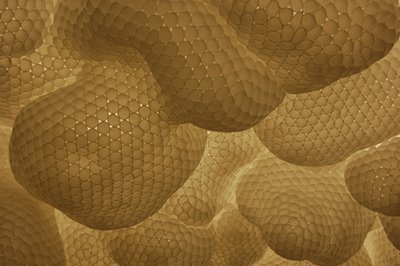 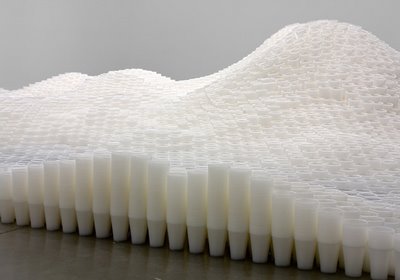 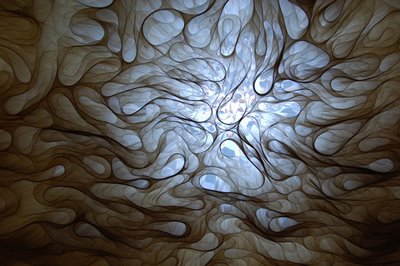 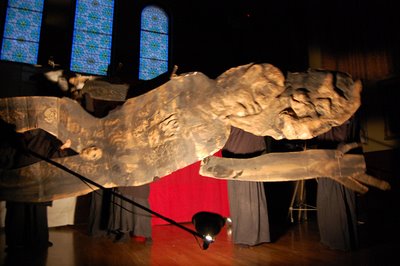 Bread and Puppet Theater performed its new show “Storm Office” at Brown University’s Sayles Hall last night – and will perform it again in Providence tonight and tomorrow. (Also they perform the family-friendly “The Sourdough Philosophy Circus” on Saturday and Sunday.)

I’m still processing its flurry of images and words. They don’t quite gel. But it felt like a divorce drama – with the domestic turmoil reflecting and infected by turmoil out in America. Or perhaps symbolic of it. Or maybe vice-versa.

In between, a fist smashes down upon a man; a giant cardboard person floats across the stage and out; a tiny airplane flutters in a man’s hands like a butterfly; a tiny woman paddles a boat atop silver seas and is overturned; a character with three sets of arms cradles three small people like babies, and these little people are seized and put in shopping bags and taken away. 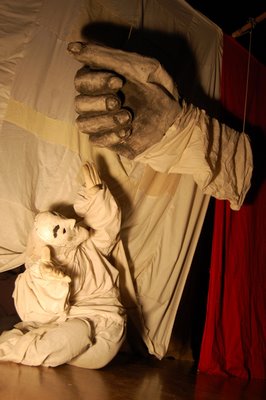 Then turbulent red shadows, maybe of people in danger, and shouts over oppressive bass drum beats: “keep moving,” “what the hell,” “leave me alone,” “shut up or I’ll bust your head in,” “you are under arrest,” “get the hell out of here.” An announcer, speaking as if via some loud speaker, interrupts: “Ladies and Gentlemen, what we have here is a great opportunity.” And then: “Ladies and Gentlemen, We appeal to your conscience. We appeal to the best in you. We need your help. We must endorse our great plan to save you from yourselves. Your very future is at stake. Please understand, only you can curtail the disastrous effects of the current events.”

The stage is divided into two – white on the left and black, burlap and red on the right. The actions of white man on the left ripple across to the black people on the right, and become amplified as they do. At one point the white man opens a window and blows over a flowering tree. The momentum of this act carries across the stage, becoming a larger flowering tree that falls on a black person.

The show radiates anxiety and anger. I don’t believe it ever spells out what is causing all this upset. It’s just a “storm” or “disastrous” current events. But at this moment, what comes to mind is the shattering economy.

The conclusion features narration and banners about a monstrous storm that sweeps up the world in a madness. It finally exhausts itself, “leaving nothing but it’s fury behind. … This left behind fury invades the humans who themselves become storms and create institutions called storm offices. Ah-ha.” 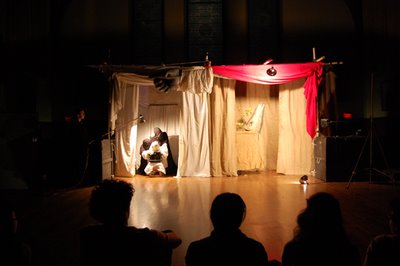 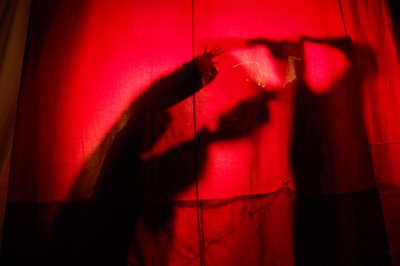 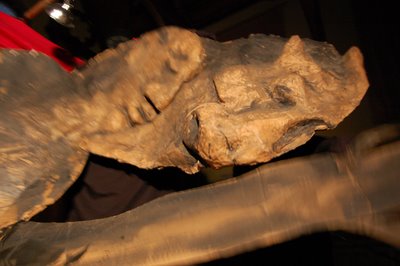 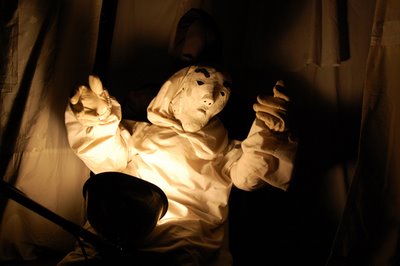 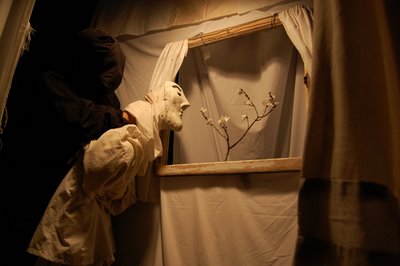 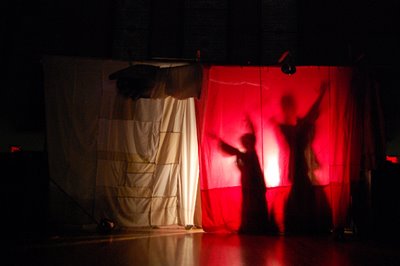 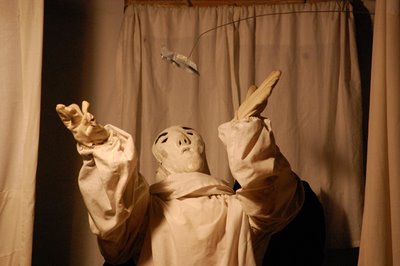 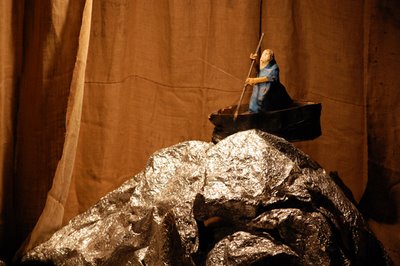 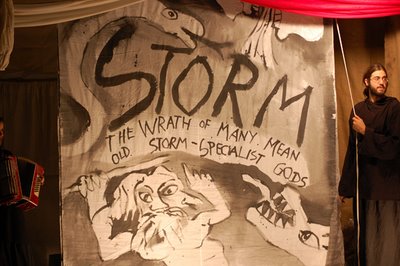 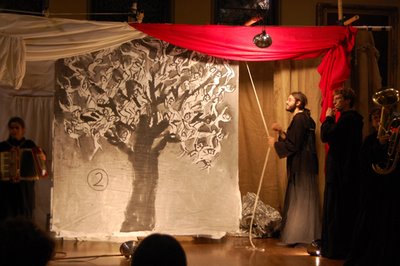 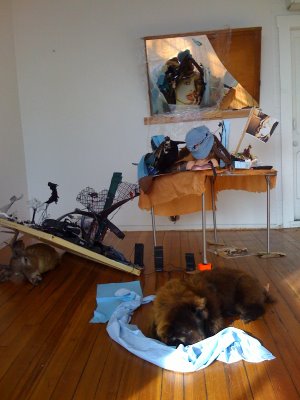 From my review of “Trash” at 5 Traverse:

… Tom Deininger’s “Angelina Jolie,” which is the most astonishing, perverse, horrifying, weird piece of art on view in the region right now. I mean that as a compliment. I think.

“New Obstructions” at AS220

AS220’s exhibit “New Obstructions” is one of those right-on ideas that seem to come so naturally to the institution. In July, AS220 acquired the Mercantile Block on Washington Street, with plans to redevelop it much as they did with the Dreyfus next door. Over the winter they’ll begin turning it into studios, offices, and live-work spaces, with an anchor ground floor tenant like the Dreyfus’ Local 121.

But before they fix up the joint, artist and AS220 curator Neal Walsh enlisted artist Mike Taylor to help him organize a quick group art show in the former Cogens Printing Services at 135 Washington Street. It feels like a punky version of one of those old Hollywood let’s-put-on-a-show musicals, in which a plucky gang of performers band together to entertain despite a lack of money and time and everyone saying they’ll never be able to do it. 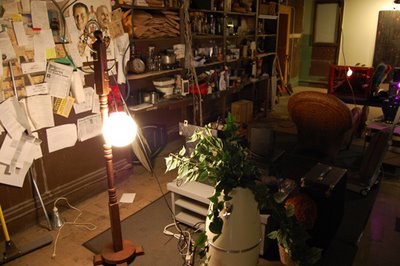 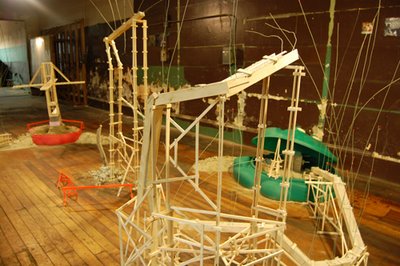 Here are some photos from yesterday's fabulous Honk! Parade from Somerville to Cambridge, Massachusetts. You can see more of our photos here. 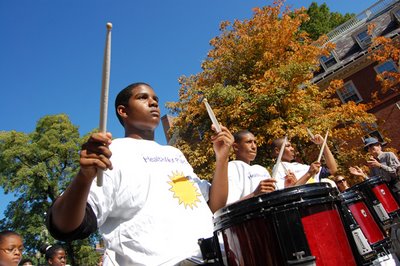 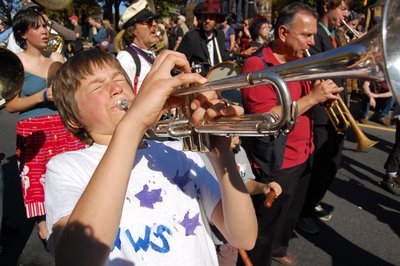