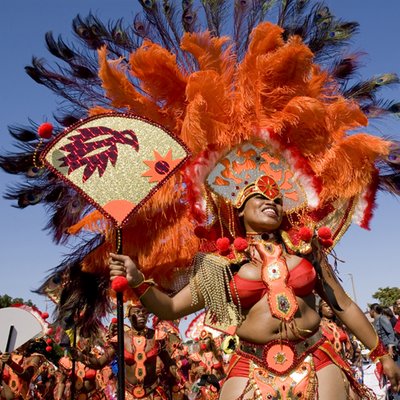 From my review of Milton photographer Michael C. Smith’s “Streets of Color” exhibit at Lesley University in Boston and preview of the 35th annual Boston Caribbean Carnival:

In one photo, the queen of a mas (as in masquerade) band grooves down a street during the Carnival parade. Her swaying hands up, a smile across her face, she’s wearing an orange outfit, with gold boots, and giant green and orange wings and red plumes. Another shot shows a mas-band king as a riveting dream in black and gold, trailing great green flags, with green heads sprouting from the end of curving arms on his costume, and three lion heads scowling down from a pole. King and queen costumes rise as much as 15 feet tall — so big that they’re built as wheeled carts that hitch to the performers.

The exhibit’s 37 color photos from 2005 to 2007, plus three plumed headdresses, serve as an appetizer for the Carnival, which celebrates its 35th anniversary this month. The main event, the Carnival parade on August 23, offers streams of vividly costumed, scantily clad masqueraders shaking their booties to DJs and steel-drum bands playing soca and calypso plus some spooge, reggae, salsa, and zouk. 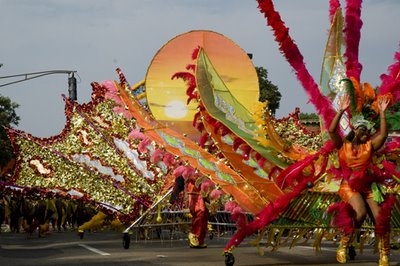 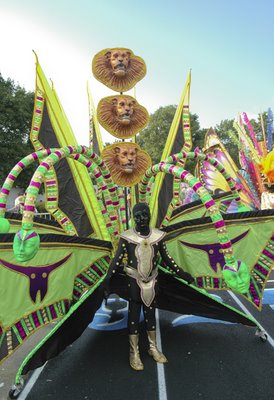 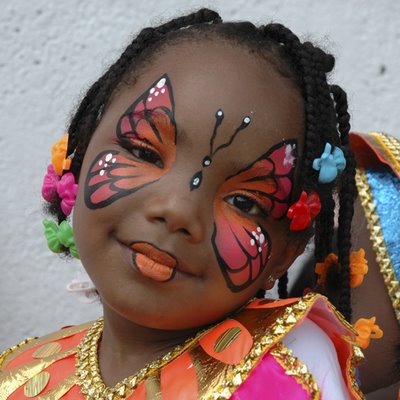 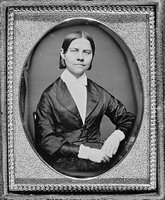 Lucy Stone, the great Massachusetts feminist and abolitionist, speaker and writer, was born at her family’s farm in West Brookfield on this day 190 years ago. The home is gone, but the property, which is operated by The Trustees of Reservations, is open to the public. You can also visit Forest Hills Cemetery, where she became the first person in Massachusetts to be cremated after she died at her Dorchester home in 1893.

When Stone graduated from Oberlin in 1847, she became the first Massachusetts woman to earn a bachelor’s degree. She traveled the country, speaking publicly against slavery and for women’s rights. She helped organize the first national woman’s rights convention in Worcester in 1850. When she married Henry Blackwell in 1855, she set a precedent by keeping her own name. In 1870, Stone helped found the weekly suffragist newspaper Woman’s Journal, which she long wrote for and edited.

After the Civil War, she was one of the founders of the American Equal Rights Association, a coalition of woman's rights and abolition supporters. But the group split over amendments to the U.S. Constitution that granted blacks civil rights and black men the vote, but not women. Susan B. Anthony and Elizabeth Cady Stanton, refusing to support legal changes that did not enfranchise women, broke off to form the National Woman Suffrage Association. Stone, who said, "I will be thankful in my soul if any body can get out of the terrible pit,” helped found the rival American Woman Suffrage Association in 1869. The split was not reconciled until 1890.

Judith Tolnick Champa, director emeritus of the University of Rhode Island’s Fine Arts Center Galleries, spoke on WRNI public radio on July 23 as part of its “This I Believe” series. “I believe,” she said, “in the transformative value of challenging art exhibitions as a process of public education.” Listen here. 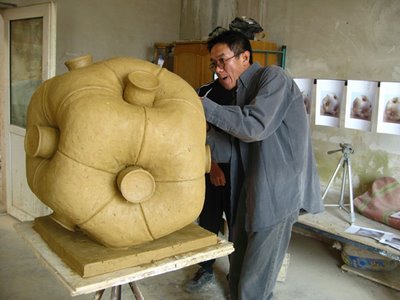 A sculpture by Dean Snyder of Providence, who heads RISD’s sculpture department, is one of 130 artworks in the “Beijing Olympic Art Dream” exhibit for the 2008 summer games at Beijing’s Olympic Park on the grounds of the new National Aquatic Center.

The outdoor exhibit opened to the public on Aug. 8. Snyder tells me, “It’s kind of there in perpetuity because it’s part of the collection of the city of Beijing. They own it.” Though it may not remain in that location.

The project began when Olympic folks contacted him out of the blue last September, apparently after reviewing his work on his website. They wound up deciding to create an enlarged copy of his 2001 sculpture “Boogle,” which was featured in the 2001 DeCordova Annual. Based on Snyder’s photos of the piece, which is in rawhide and wood, expert stoneworkers at Feixiang Architectural Sculpture Co. in Beijing created a clay maquette to prepare to carve the final version in stone. He visited the firm in October 2007 to check on their progress. The process has been a first for the studio sculptor, who usually fabricates his own work.

Closer to home, Snyder also has nine new sculptures on view through Aug. 31 at Skidmore College’s Tang Museum, which describes them as “a fusion of organic sources and high-tech materials, using carbon fibers for structure and glossy auto enamels to dazzling visual effect.”

Related:
My review of Snyder’s show at Providence’s Wheeler Gallery in 2007.
Someone else’s review of the 2001 DeCordova Annual: “In both of Snyder’s three-dimensional works, the artist plays volume and mass against near-weightlessness; he also plays luminosity against opacity — though peppered with wooden embellishments, the sewn and stretched rawhide of both Joop and its pincushion cousin, Boogle, practically glows.”

Pictured from top to bottom: A Chinese carver creating the maquette for “Boogle”; the original “Boogle”; the stone copy at the factory and in the Olympic Park; and a detail of “Almost Blue” (detail), 2008, which is on view at the Tang Museum. 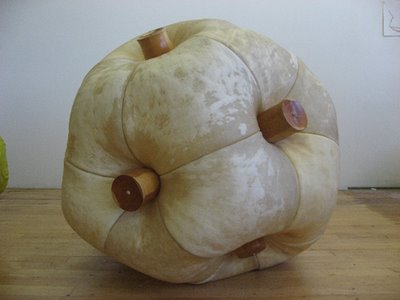 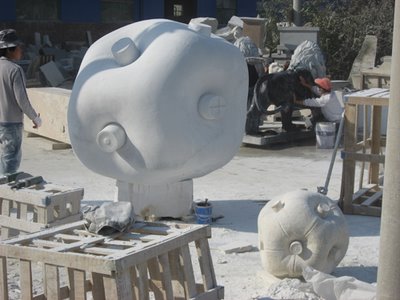 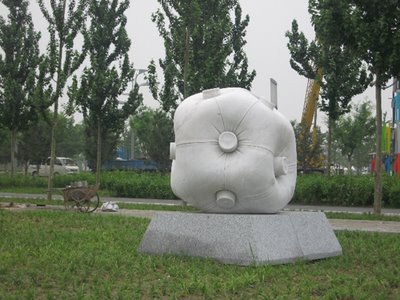 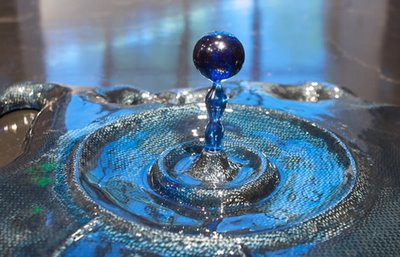 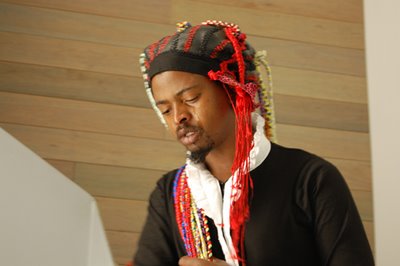 From my review of “Momentum 11: Nicholas Hlobo” at Boston’s Institute of Contemporary Art:

The South African artist Nicholas Hlobo quietly walked into the hallway at the Institute of Contemporary Art, sat down in a corner on a nest of curry bush, and put on a black headdress or crown that was connected by braided cords to plant-like suction-cup-looking things clinging to the walls. The July 29 performance, “Thoba, utsale umnxeba” (in Hlobo’s native Xhosa language it means “to lower oneself and make a call,” or, as the wall text described it, a “gesture of respect and diplomacy”), was part of his new exhibit at the Institute of Contemporary Art. “It’s about the idea of communication,” Hlobo says of his act when I telephone the next day. “I was trying to make some sense of the space and the idea of the space, the museum, the gallery, the location of the museum, the culture — the culture is almost foreign to me.”

Pictured: Hlobo performing “Thoba, utsale umnxeba” and his sculpture “Umphanda ongazaliyo,” 2008, rubber, ribbon, zippers, leather, steel and organza. The performance photos are by The New England Journal of Hlobo Research. The sculpture photo is by John Kennard and courtesy of the artist and Michael Stevenson Gallery, Cape Town. 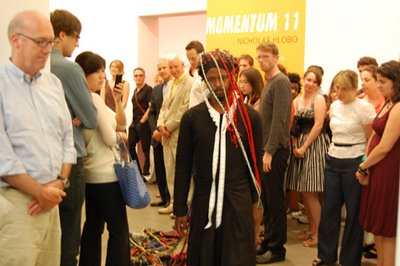 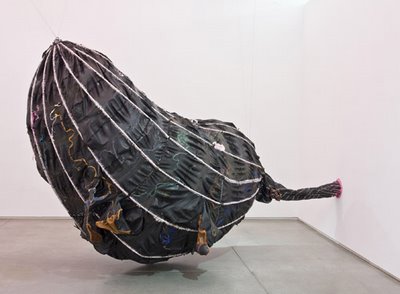 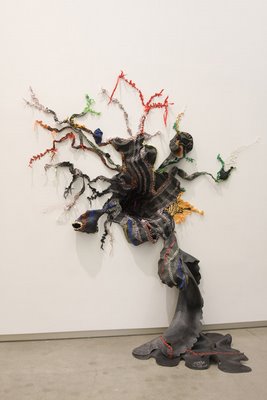