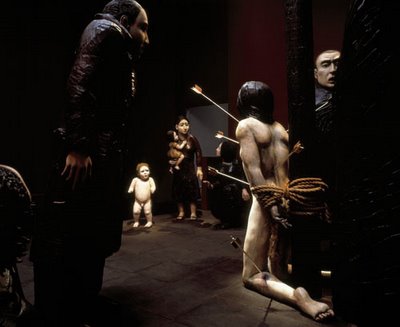 From my review of Ana Maria Pacheco’s sculptural installation “Dark Night of the Soul” at Framingham’s Danforth Museum:

In the darkness stands a crowd of agitated people. When you walk between them, at their center you find a man, naked except for a black bag over his head. He would easily be the tallest in the room if he stood up. But he is kneeling, with his hands pulled behind him and tied to a post. And he is shot full of arrows.

So it goes in Ana Maria Pacheco's haunting sculptural installation "Dark Night of the Soul" at the Danforth Museum. Though completed in 1999 and inspired by the figure of St. Sebastian, this wood passion play viscerally conjures up the specter of American torture committed in the name of the "war on terror," from Abu Ghraib to CIA waterboarding. Other artists have incisively addressed this subject; Jenny Holzer's screenprints of government documents currently at Mass MoCA and in Massachusetts College of Art and Design's "War Stories" exhibit come to mind. But few make you feel so caught up in the middle of it. 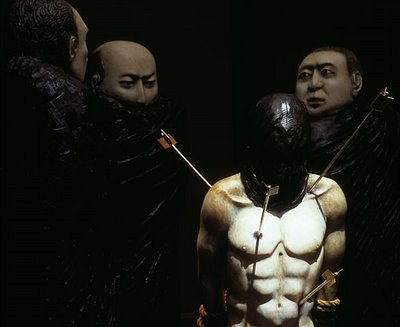 Louis I. Kahn at Cape Ann

Cape Ann, Massachusetts, is the subject of a pair of Depression-era travel studies by the famed, late Philadelphia architect Louis I. Kahn that New York’s Lori Bookstein Fine Art is presenting at the Works on Paper fair in New York this weekend.

A watercolor said to depict Cape Ann seems (in reproduction) to depict a few houses or shacks along a road that winds through sandy hills. Its loose, open composition brings to mind John Marin’s work. A charcoal drawing depicts a shadowy elm-lined Gloucester street.

Both works date to the mid 1930s, putting Kahn among the long line of American modernists who vacationed or summered in Gloucester and Rockport during the 1930s and ‘40s, including Stuart Davis, Marsden Hartley, Adolph Gottlieb, Aaron Siskind, Barnett Newman and Mark Rothko.

Related: The New York Sun has an article about the Bookstein exhibition of Kahn’s travel drawings here. 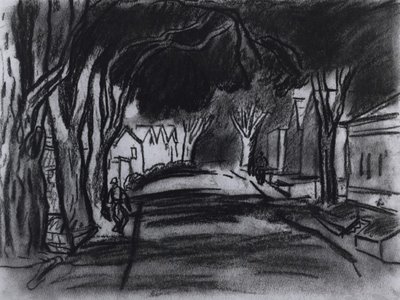 Last night at the sixth annual New England AICA awards, director Francine Koslow Miller announced that this would be the group’s last local awards ceremony. Overnight I asked her about the reasons for the decision.

“It is an enormous task to put the whole thing together — there's no budget for anything,” she writes. “The only support we get is from the hosting museums. Also, this has become all that we do as AICA New England and we want to spend more time networking, having fun and getting new writers in AICA.”

Understandable. But, as I wrote last night, the project will be missed.

The New England Journal of Aesthetic Research has added two new features to the sidebar at right to better serve our readers. “Check It Out” highlights notable exhibitions and events. And “Data Processing” collects riveting art news, particularly reports about New England stuff.

The New England chapter of the International Association of Art Critics (AICA) announced its awards for the 2006-’07 season during a ceremony at Brandeis University tonight. The group (of which I’m not a member) has issued awards for the past six years under the leadership of director Francine Koslow Miller, but she said this would be the group’s last local awards ceremony. That’s sad news. The awards ceremony ain’t perfect (what is?) but it’s one of the few occasions when the greater Boston arts community gets together and celebrates the good things we do around here.

But declining as a percentage of local state economies

More people were employed in the creative economy in New England than the national average as of 2002, according to a November 2007 report “The Creative Economy: A New Definition” by the Boston nonprofit advocacy group the New England Foundation for the Arts. But while the national number of creative economy workers compared to total employment grew from 3.47 percent in 1997 to 3.52 percent in 2002, the percentage in New England states declined from 4.15 percent to 3.97 percent.

“This only makes it more imperative to identify the strengths of the region and build upon them,” the report says. “Cultural enterprise and workforce employment is not only a community asset for the high quality of life it provides, but because steady, lifetime work, is what a sustainable, balanced community needs.”

“The Creative Economy: A New Definition” also addresses just what the term “creative economy” encompasses, arguing that defining just what it means is key to reliable, consistent analysis of the sector. “Our definition of the creative economy is represented by the ‘cultural core,’” the report says. “It includes occupations and industries that focus on the production and distribution of cultural goods, services and intellectual property. Excluded are products or services that are the result of non-culturally based innovation or technology.” 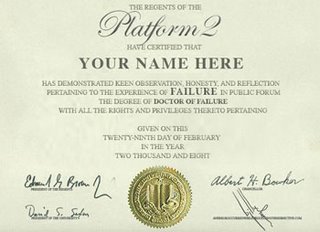 Platform 2 offers a “Failure Support Group” at 6:30 p.m. Friday, Feb. 29, at the Democracy Center, 45 Mt. Auburn St., Cambridge. Cookies and bad coffee will be served. These are the same smart folks – iKatun, Andi Sutton and Jane D. Marsching – who have looked at “art and social engagement” by organizing intriguing public discussions of the “race, class, geography and art” and theme of the “commons” last year.

This time around the subject is failure. Some 20 people are expected to give brief presentations about their failures, followed by a group discussion. The organizers write:

Art projects fail a lot, particularly those that are participatory, public and/or social. They fail for different reasons and cause myriad revelations. Nevertheless, the structures that we use to talk about these works and contexts where they are presented often don't leave room for discussing the failures plainly and objectively.

We're interested in failure – in its relationship to creative production, artistic rhetoric and public presentation. So interested, in fact, that we want to share ours and hear about yours.

We invite you to join us for a Failure Support Group, an evening survey of failed processes and failed projects (yours and ours). Is there, actually, a recipe for failure? Are certain methodologies more prone to failure than others? How? What is at stake in acknowledging failure – in one's process, one's community, or one's career?

The idea of “failure” zeros in on this. It also addresses the idea that we want artists to take risks, and with risk-taking there will be failures. As a critic, I wonder how do we take this into account? Can exhibitions and performances be experiments, and judged as such? Or should everything be in fine working order? How do we support good art as well as good risk-taking?