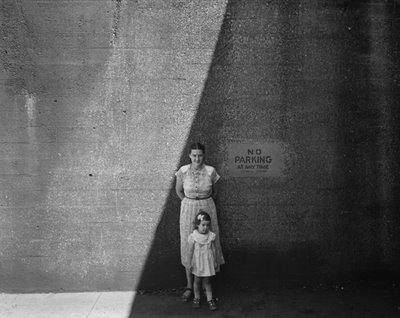 I spoke with Eleanor Callahan and her daughter Barbara Callahan Hollinger (pictured above in 1953) on Nov. 11 when they came up from Atlanta (where they live) to see “Harry Callahan: Eleanor” at the RISD Museum. Below are some excerpts from the interview:

Eleanor: “I think from the time that I was introduced to him until he passed away, we were very close. If he had to go any place I would go with him. That’s what I mean. So I would appear in every area where he wanted me to be.”

Eleanor: “He just liked to take the pictures of me. In every pose. Rain or shine. And whatever I was doing. If I was doing the dishes or if I was half asleep. And he knew that I never, never said no. I was always there for him. Because I knew that Harry would only do the right thing. I never had any fear. Harry could do whatever he wanted with me and my body.”

Barbara on posing for her father: “It was fine when I didn’t really stop to think about it. But he never did things quickly. So you had to be more like Eleanor. So about the time I was 9 or 10 I didn’t want to stop.”
Eleanor: “She was the daughter, she was the little child.”
Barbara: “He would take so long to pose something and get it the way he wanted it that it wasn’t a quick thing. And I’m ADD enough that … So he said it was hard to keep me still. So you don’t really see much of me after that.”

Related:
The Smithsonian’s Archives of American Art offers the transcript of a 1975 interview with Harry Callahan in Providence. The interview is so-so, but it’s interesting to sample an extended conversation with Callahan.

Pictured from top to bottom: Harry Callahan, “Eleanor and Barbara,” 1953, and “Eleanor, New York,” 1945. Both are copyright the Harry Callahan Estate. 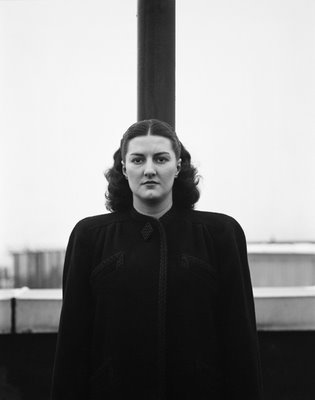