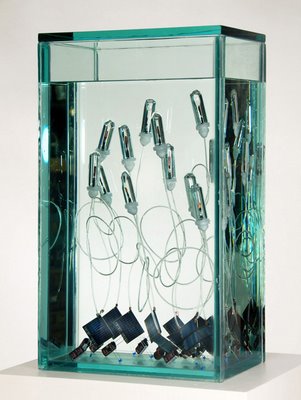 Boston artist Steve Hollinger is a sort of garage innovator whose most fascinating works are machines that mix old timey mechanics, carnival amusements and contemporary electronics to mimic living organisms. They entrance because of how they stand between the two worlds, and tap our wonderment at both.

Perhaps his best known work (after his umbrella) is “Jellyfish,” now in the collection of the DeCordova Museum. The sculpture seems like some crackpot Renaissance inventor’s mechanical version of a jellyfish, all glass and metal, fluttering up and down inside a small aquarium in response to light.

His exhibit “What’s Left” now at Boston’s Chase Gallery offers new work in this vein, like “Heart #4” (pictured below), a solar-powered contraption that pumps blue fluid through a series of little clear tubes and globes like a model of a heart. 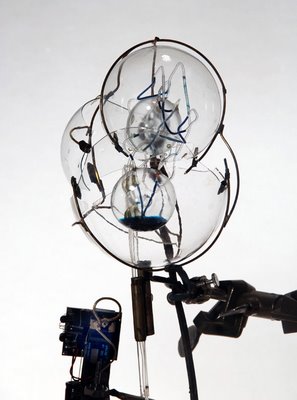 His “Pod” devices (pictured below) are slung over rods in the gallery’s front window. They each feature a solar cell connected by wire to a little metal fin inside a clear capsule. Sunlight triggers them to shake and click against each other – like jumping beans. They seem uncannily as if they’re alive.

Hollinger’s most ambitious (or so it seems) project here is his “Pod Tanks” (pictured at top), which feature groups of his “Pods” floating in mineral oil in heavy glass aquariums like futuristic electronic seaweed. They look like the sort of slick decorations you find behind the maître d's station in tony restaurants. Light causes the metal fins inside the capsules to spin this way and that, but they don’t shift in the fluid. And that’s a let down.

In other pieces here, Hollinger demonstrates that he remains a master of special effects, presenting fragile-looking little translucent boxes made from leaves, magical picture devices showing things like people flying a kite under full moon, and simple animation machines that show people dancing.

But on the whole, it feels as if Hollinger is in the middle of working out ideas. The works seem to be successful components that could – and I hope will – develop into something more complex and animated.

Related:
My review of his 2006 Chase exhibition. 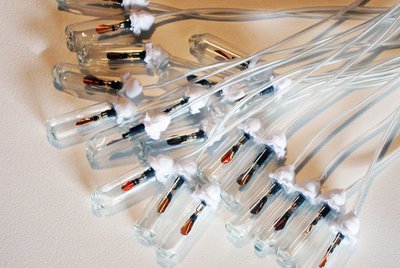