Platform2's "Parade for the Future" 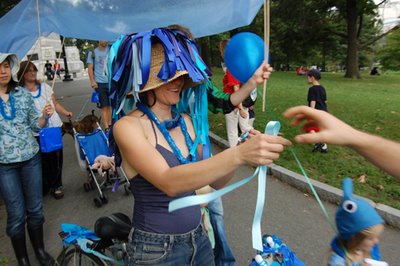 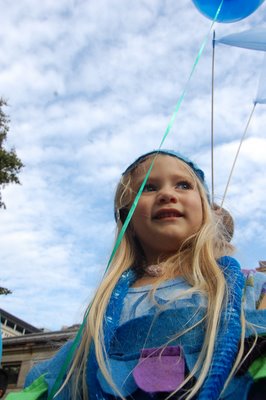 Platform2’s “Parade for the Future” attracted 15 participants (including me) dressed in blue or various nautical attire to Boston’s Park Street T stop this afternoon for a global-warming-themed procession. The idea of organizers iKatun, Andi Sutton and Jane Marsching was to walk “along the flood line of the neighborhood, tracing a worst-case scenario future geography from the year 2108.” It’s part of a growing trend in art and activism to mark predicted high-water marks – and remarkably similar to a global warming protest in Boston Common in April 2007. 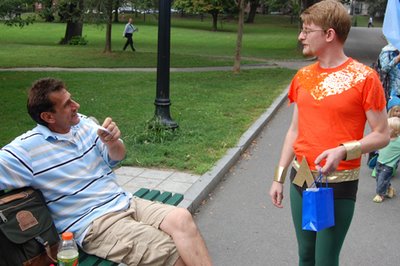 Today’s parade was mostly a fun lark, but it attracted attention. Matt Nash, dressed in an Aquaman costume, lead the way through Boston Common and the Public Garden to Arlington Street and back again. A woman dressed in a mermaid costume pulled a cart behind her bike with speakers playing music. Marsching (with a gauzy blue umbrella) and Sutton (dancing along in some sort of cockamamie diving apparatus) tied blue ribbons to trees, fence posts, sewer grates, trash cans, vendor carts and statues along the way – marking the future high-water mark. Or something like that. A couple random drunk guys joined in the procession. 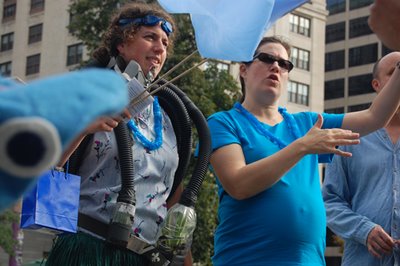 The point of the thing was bewildering to most observers. And a pamphlet that paraders handed out to watchers only mildly helped clear things up. “Come on, come all to a Parade for the Future!” the flier read. [Click on the pamphlet images at bottom to enlarge them.] “Let’s celebrate what hasn’t happened yet, notably the impending submergence of our city under water due to climate change.” The writing, like the parade, was more of a goof – a happening, with a tinge of melancholy – than a serious warning: “What songs would Bostonian gondolianers [sic] sing while propelling us around? … Would tourists traverse the Freedom Trail by submarine? … Where would people get their Burberry scarves if lower Newbury flooded?” One biting note: “Will we open our doors to our displaced friends and neighbors?” 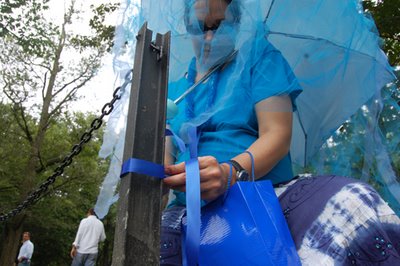 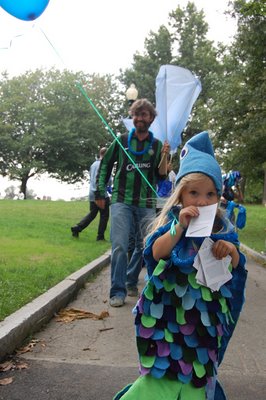 The parade’s ultimate star was my pal Abigail Cook (no relation), who recently turned 4. She helped hand out pamphlets and candy (that turned tongues blue) to people in the parks. And, dressed in her fish costume, she proved irresistible to shutterbugs. I think that was the main success of the event: its direct appeal to the audience. Dozens of people in the parks got the pamphlet and dozens of people photographed and videoed the parade. (I look forward to seeing it on Flickr.) It was one of those “WTF!” things you just had to snap a picture of. 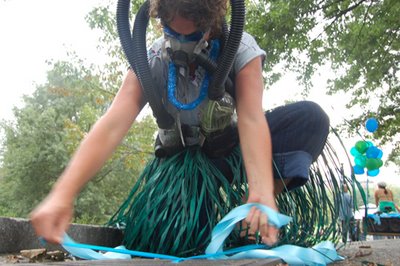 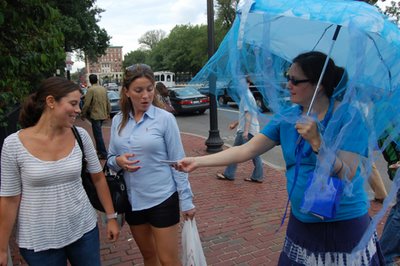 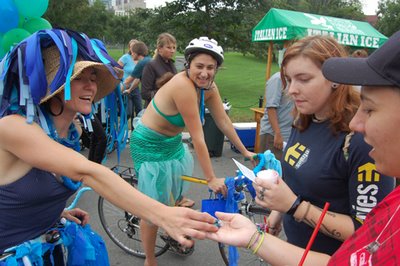 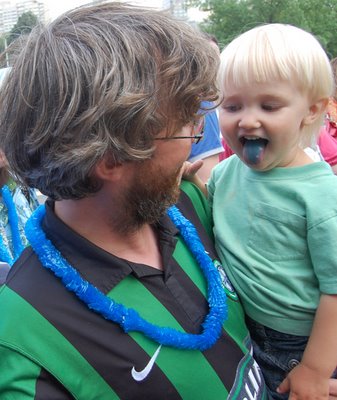