Bread and Puppet Theater founder Peter Schumann (pictured above) discusses Israel and Palestine, America as a “fascist democracy,” criticizing Democrats, the theater’s influence, and Julie Taymor. The theater will march in the Honk Parade from Somerville to Cambridge on Oct. 12 and perform in Providence from Oct. 15 to 19, in Lawrence on Nov. 9 and 10, and Boston from Jan. 25 to Feb. 1. This is the second part of edited excerpts from an Aug. 12 conversation I had with the 74-year-old at the theater’s farm in Glover, Vermont. Read the first part here. The final part is here.

Peter Schumann:
On the criticism of his Israel-Palestine works: “There are forces in Burlington that are trying very hard to make me look like an anti-Semite. They write it, they say it, and they organize against me when I go to Burlington. But that’s their privilege, you know. They have been doing that all along. That’s one of the tactics of how you silence people. It can’t really impress me too much because it has a very bad history of being what it is. And it’s fairly stupid without asking somebody to call somebody a Holocaust denier. Wouldn’t be decent to at least ask that person: do you deny the Holocaust? From what do you deduce such a thing. How is that possible? From the expression on my face? From my work? How? That’s all right. We are going to lose a big branch of this so-called liberal audience through this, that’s for sure. But that’s okay. We have to do that along the way again and again and again. … There were again and again these moments of people saying, ‘Oh, now that’s going too far, you can’t do that.’”

“It seems to me so shamelessly wrong that the Western world has decided to unquestionably support this military state of Israel, which is barely a democracy. How can you call something a democracy when the majority of the people are there for their religious origin? How can that be a democracy? When there’s a few token Arabs allowed to be partaking in the state. And the rest of the world is invited to bring their Jewry into the country. To me that doesn’t click like democracy. That clicks to me like fascism. So that’s what it is. It’s very similar to America, it’s a fascist democracy. But it advertises itself and is proclaimed by the West as a steadfast democracy. Which it isn’t. By definition not if you define what a democracy ought to do and want to do and wish to do. So I don’t know. [Democracy:] It certainly is a form of the people who live there govern. And the people who live there is the Palestinians as well as the Israelis. And the Palestinians are under military occupation so they don’t govern, they are being trampled upon. And their sons and brothers and dads are killed randomly. The Israelis are also not represented because there are elements in the Israeli population that also go unrepresented.” 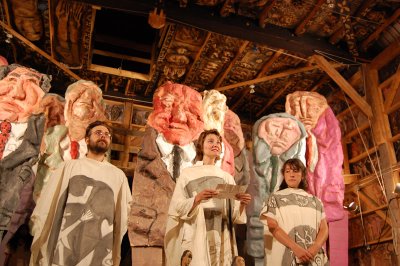 How do you compare the US and Israel? “They are closely linked as you know. The history of that is documented, and I’m not a historian. There is the desire to be strong in the Arab world, to be strong on that particular edge over there. So and to have military input there and to have a cohort state there that can act militarily for you when necessary. And all that. There are so many points to that. I don’t need to do the detailing of that.”

How is America a fascist democracy? “I don’t think it’s a democracy when the majority votes for one candidate and another candidate is made president. By definition that doesn’t seem to me to be a democracy. And it also doesn’t seem to me a democracy when a president is allowed on the basis of blatant lies to deceive a whole population and he doesn’t even get impeached or taken to court or taken to the guillotine or whatever people do with people who do that. But nothing of the like. He keeps blabbering along and doing it, even viciously cheating on what’s happening in Iran. And sort of warmongering in that direction again. It’s militarily one organization. So why in a democracy would something that the people are supposed be run really by the military? Well, Hitler claimed to be supported by the majority, but if you take a close look at the history of how much work he had to do to manipulate it that way, that doesn’t look so good either. That maybe he was for one second when he was elected, but two seconds later not anymore. So I think if fascism is this – as demonstrated by Mussolini, Franco and Hitler and so on – this rude form of simply pursing objectives of national interest rudely in the world at large, but that’s exactly what the U.S. is doing. It’s the world’s governing power. And it’s not going to change with another Democrat or somebody like that coming in. They won’t be able to do it. Maybe they will be responsible for a million deaths fewer than the Bush administration, which would be great. Because if you consider numbers then any change whatsoever may ease up the pain of some Afghani villages or the many other people who suffer from air attacks. I mean they’re bombing Iran. They’re doing bombs and CIA work of blowing up factories in Iran all these years now in preparation for war-making. They’re all over the place.”

Lubberland, leans heavily toward criticizing advisors to a potential Democratic administration. “I didn’t even bother about the other ones [Republicans]. Just because that’s so blatantly off anyway. Take the one that the liberals like and criticize those. Because the other one, they don’t go for McCain in the first place. They go for the other side, whether it was Clinton or Obama. But they don’t want to look at what’s in there, what’s inside those guys. And inside of these guys is the same old mass murders that were responsible for incredible events in this world like East Timor or the starvation of the Iraqis during the blockade.” 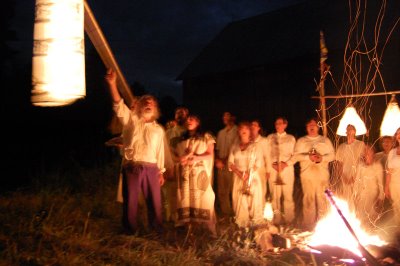 What is the theater’s influence? “I don’t have to see that. It’s not my job. I know that there is such a thing. It doesn’t bother me. I know that so many people go from here and use these you call it techniques, they are not really techniques they are something else, and they realize that you can use painting for theater, and you can misuse music for sculpture, and so on. You know, you can combine your artistic talents in odd ways and in many ways and they don’t have to be in this abstract mode of being decorative, but they can really speak to issues of the day. So I think that’s what people take away from here. And they go and they make clay molds and make puppets. Or they go away and make cantastorias or they make videos that are like cantastorias. Whatever it is.”

Street protest: “We thought of it as new when he did it in the city, in New York in the early ‘60s, but then the people who we met told us, ‘Well, 20 years ago, 30 years ago something very similar existed.’”

“For me the difference was really that what we did was in the street. Because I worked with dancers in [Merce] Cunningham’s studio and other places and they had no sense that they lived in a Puerto Rican community or that the drug addicts were climbing through their windows, even though they lived in similar circumstances to as I and my family did. But their art was aloof and this aloofness disturbed me. I didn’t think art can be. So for me to take even if it was a non-understandable piece of art or sculpture into the street was its test. And showing it to pedestrians seemed to me makes the sense that it can make. Whereas in the gallery there’s a sanctified sense that’s already in the gallery, that lives there, that is paid for. It is a totally different situation from not being in the gallery.” 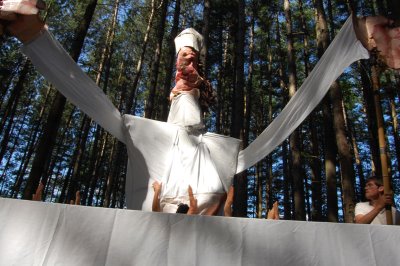 Where does that need for engagement come from? “Growing up in Nazi Germany, naturally. I learned, I think it was my dad who was the headmaster of the school where I went when I went to school again after being a few years a refugee.” Students were made to watch films of the concentration camps. “With these piles of bodies. And that just totally devastated not just me, but I think of my classmates and all of us. It’s totally devastating that’s what it is. And it devastated us. And it was unbearable. And to think that you live in a country where the military or the government had done that which you saw there was unbearable. So to find responses to that. It wasn’t immediate. I didn’t start street theater right there and then. I had to come to New York and see people, all the Bowery bums and the poor people hanging out in the streets, typical New York slum life. This street theater was born suddenly. But it’s all from that. It’s all from this awful experience.”

What do you think of Julie Taymor? [She hung around Bread and Puppet in the early 1970s and included a knock-off off of the troupe in her 2007 film "Across the Universe."] “I don’t even know it. I shouldn’t talk about it. I know it so superficially. I saw little bits and pieces that I didn’t care for. I don’t know what it was. It looked to me strained, laborious and not beautiful. It’s something cold that I don’t feel connected to.”