David Mickenberg, the director of Wellesley College’s Davis Museum and Cultural Center and an art teacher at the college, has resigned “to pursue other opportunities,” college President H. Kim Bottomly announced yesterday. (Her full statement is at bottom.)

Wellesley officials declined to comment when asked if Mickenberg’s departure had anything to do with the recent, shocking revelation (by Geoff Edgers) that the museum had lost its 1921 Fernand Leger painting “Woman and Child” (pictured below). Spokeswoman Mary Ann Hill said by e-mail, “Because this is an internal personnel matter, I will not be able to provide any further information on the topic.”

The Davis’ assistant director Dennis McFadden will serve as interim director while Bottomly, who just joined the school this May, forms a search committee seeking Mickenberg’s successor.

Mickenberg became director of the museum in January 2001, after working as director of the Block Museum of Art at Northwestern University in suburban Chicago for 14 years. He filled the shoes of Susan Taylor, who left the Davis to lead Princeton’s art museum. 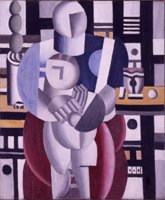 At Northwestern, Mickenberg organized exhibits but his most prominent achievement was leading a $25 million redesign and expansion of the Block, which reopened a year before he left. At the Davis, Mickenberg oversaw repairs to the Rafael Moneo-designed building that the museum moved into in 1993. Humidity levels required to protect the art in the building were causing condensation “during exceptionally cold winter weather,” Mickenberg had said. So the building closed for work in May 2006 and reopened last September. While the museum was closed, works from the collection, including the Leger, were exhibited at the Oklahoma City Museum of Art – where the Leger was apparently last seen in April 2007 as it was packed into a crate to be shipped back to the Davis.

At the Davis, Mickenberg was given credit for refocusing “the museum’s effort toward building and researching the collection and significantly increasing opportunities for collaboration with students and faculty across all academic disciplines,” according to a history of the museum on the institution’s website. “Under his leadership, the museum made several important acquisitions and introduced a new adjunct curatorial program with college faculty members, a visiting scholars program, and several new internship opportunities for students.”

Date: September 10, 2008
To: Wellesley College community
From: H. Kim Bottomly
Re: Director of the Davis Museum and Cultural Center

I am writing to let you know that I have accepted the resignation of David Mickenberg, Ruth Gordon Shapiro ’37 Director of the Davis Museum and Cultural Center, who is stepping down to pursue other opportunities.

Since assuming the leadership of the DMCC seven years ago, David has enhanced its outreach and visibility to the campus community, our neighbors, and the broader arts community. I am thankful to David for his service to the College and wish him well in his future endeavors.

I am grateful to Dennis McFadden, associate director of the Davis, who will serve as interim director for the immediate future. I am forming a search committee to work with me to select the new director.

Wellesley is fortunate to have one of the oldest and most comprehensive art museums of any college or university in the United States. The Davis Museum and Cultural Center plays an important role in the intellectual life of the campus community and the educational experience of our students. I am committed to doing all I can to ensure its continued excellence.