In the early ‘90s, I heard Carroll Dunham talk about his work. The badboy painter and Philips Academy alum mentioned the struggle of artists, like himself, who came of age during the height of Minimalism to figure out what the hell to do next. The loudness, the brashness, the messiness, the boorishness of American art in the ‘80s – painting in particular – was a big Bronx cheer in the face of Minimalism’s ascetic academy. And Dunham’s gleefully “bad” painting is part of that.

Through July 13, the Addison Gallery is presenting a survey of more than 100 prints by Dunham, who recently donated copies of his entire print output to the Andover museum. The exhibition, which includes lithographs, etchings, drypoints, linocuts and screenprints, arrives with a catalogue raisonne of Dunham’s prints that the museum has produced.

The earliest prints here, dating to 1984, are animated by scrawls and splashes and scratches. His best stuff comes in the late 1980s, with works like the intaglio “Point of Origin," 1988-92 (above), in which a red hammerhead form blasts into the air as if spewed from a volcano. In this period, Dunham’s colors are rich, the compositions bright, kinetic, a bit bawdy. But Dunham subsequently simplified his style until it became a simplistic hieroglyphics of blockheads and penis-nose characters. Imagine the most dull witted adolescent bathroom graffiti – it’s probably not quite as interesting as that. 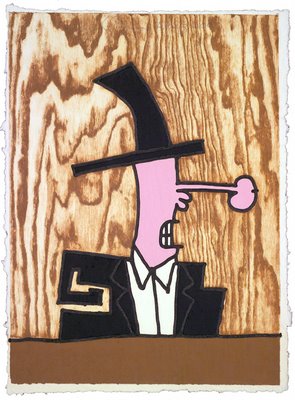