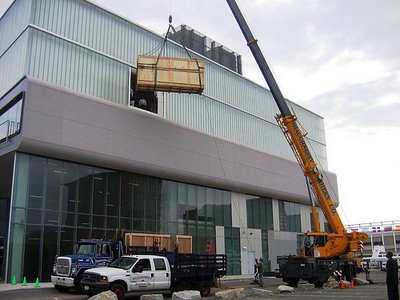 When I heard that Boston’s Institute of Contemporary Art had to cut hole in its facade to bring in one of largest sculptures in its Anish Kapoor exhibition, it struck me as odd. Why did a year-and-a-half-old art museum have to be ripped apart to bring in art? ICA spokesperson Colette Randall tells me: “This was the most time-effective and straightforward way to bring ‘S-Curve’ in.” [I’ve posted her entire explanation at bottom.] There’s something wrong with the design of a museum – custom built from scratch – when the most efficient way to use it requires you to cut a hole in the front wall.

The problem, Randall explains, is that the two crates holding Kapoor’s 2006 sculpture “S-Curve” (pictured below), which is roughly 32-feet-long and 8-feet-tall when installed, wouldn’t fit into the ICA’s elevator to bring them up to the top-floor galleries. [See photos of the installation here and here.]

It’s not so unusual for a museum to make changes to its building to accommodate large projects. Mass MoCA built a new bay door to bring in the largest pieces of Christoph Buchel’s (failed) installation last year. A difference, though, is that Mass MoCA is located in old factory buildings converted to museum use, while New York architects Diller Scofidio + Renfro designed the ICA from the ground up specifically for exhibiting art.

I can’t help seeing the ICA-Kapoor problem as a lack of foresight. ICA curator Nicholas Baume said at the Kapoor exhibition’s press preview that the show had been planned for five years, and was specifically developed with the new building’s galleries in mind.

But even if Kapoor wasn’t on the schedule, the architects had to be aware that contemporary art at the top level that the ICA aims to work at is often supersized. One of the Mark Bradford collages in the museum’s current “Street Level” show is 20 feet wide. (I assume it rolls up.)

According to the ICA, “S-Curve” is shipped in sections in two 8’ 2”-tall, 4’-wide and 16’ 9”-long crates; unfortunately the ICA’s elevator is 9'11" tall, 9’ deep and 16’ 6” long. Ugh. It’s so close to fitting that I don’t expect this to be a frequent problem – and one that hopefully is resolved since, Randall says, the cut in the facade will serve as permanent doors. But it’s a problem that the architects and ICA planners should have been able to head off. 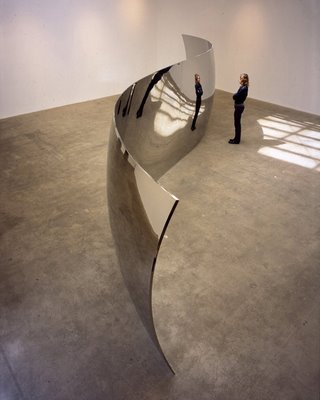 We were pleased that we had a way of getting such an important piece into the museum. It is probably not a coincidence that few museums have exhibited so many of Kapoor's work in one room. Installation of his works does present a challenge! And we are thrilled to have made it possible (as far as we know, the ICA is the only museum to show this many of his monumental works at one time in this country).

“S-Curve” could not fit into the elevator, so we created a new door on the southwest side of the building (the back wall of the West Gallery) and craned the work in. This door will be used in future when the need arises.

Two other works were brought in through the new door, though they would have fit through the elevator. Since we were installing “S-Curve” that day, we decided to bring all three works in by the same method.

This was the most time-effective and straightforward way to bring “S-Curve” in. We considered all viable options, most notably an internal hoisting system included in the architects' original design, but this method of installation would have taken us longer and would have been more disruptive to the daily functioning of the museum. Due to the weight of the object we felt it was safer for both the art handlers and the work itself to use the crane.