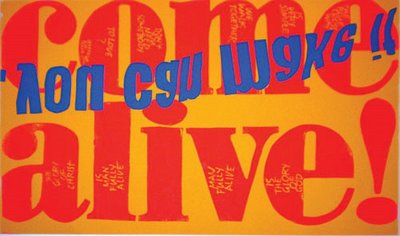 From my review of “Corita Kent: We Can Create Life Without War” at Breslin Fine Arts:

Sister Corita Kent was something of a celebrity. Newsweek put her on the cover as “The Nun: Going Modern” in 1967. She drew up a rainbow-striped “Love” stamp for the US Postal Service in 1985. She’s best known locally for designing the rainbow stripes painted across the giant National Grid gas tank off Route 93 in Boston in 1971. But she was never quite part of the fine art world, and since her death in 1986, she’s all but disappeared from art history.

So you might not know that Kent was one of the best artists to emerge in the ’60s. Her giddy, neon pop art screenprints featured jitterbugging commercial slogans and long poetic quotations that vividly advertised her Catholic faith, called for civil rights and social justice, and opposed the Vietnam War. Which got her in trouble with the conservative Catholic hierarchy in LA, where she taught art for 20 years at Immaculate Heart College before leaving the order and settling in Boston in 1968. 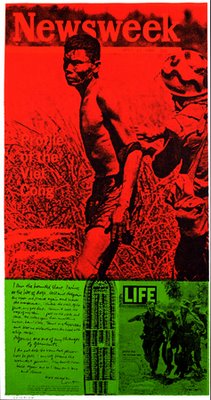