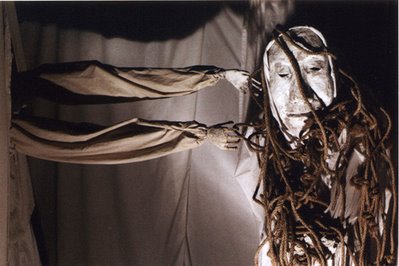 Peter Schumann discusses his six new large paintings called “The University of Majd: The Story of a Palestinian Youth” that he is exhibiting at the Boston Center for the Arts Cyclorama. (Majd is a man’s name and "university” is slang for prison.) Schumann also disuses the brouhaha over paintings he exhibited last year about the Israeli-Palestinian conflict. These are edited excerpts from a Jan. 23 conversation I had with him. (Read my full introduction here and part one of the Schumann interview here.)

Schumann: The paintings that I have on the wall are my attempt to speak up to a particular fate in a family whom I met in Palestine. Their 18-year-old son, in the first Intifada in 2002, was arrested in Ramallah together with everybody, with all males in Ramallah. But he was kept in prison. Most of them were sent back. Lots of them were shot. And he was kept in prison and then they kept him for a few years and they tossed him through the military courts and then they pinned a drive-by shooting on him, or having participated in it. And finally they gave him 30 years. So anyway the family was devastated. And he happens to be the son of a prisoner advocate woman [his mother] and a union organizer [his father] so he was singled out, not only for himself but for what family he came from. His sister came [to Bread and Puppet in Vermont] this summer and participated and did wonderful short street political sketches about Palestine.

So my paintings are paintings that have text painted into them and all these texts are from emails that [were written by a friend of the family].

NEJAR: Do you know what he was doing when he was arrested?

Schumann: Nothing, he was just taken together with all the other males in the building. They were rounded up and the women and children were kept in the apartment at gun point and the men were lined up in the hallways with their hands up behind their heads. And then they are marched away. And then they were singled out. Quite a few were shot. Others were sent home. Then a lot of them were kept. And he was one of those.

You have traveled to the Palestinian territories twice since 2006. After visiting Beit Sahour, a suburb of Bethlehem, in 2006, you made an exhibit of paintings inspired by the visit.

It seems like what most got people riled up was the comparison between the Warsaw Ghetto and Israel’s treatment of the Palestinians.

Right because I quoted from a book [John Hersey’s 1950 novel “The Wall”] and I used quotations from that book, fairly arbitrarily.

Are you going to be making those kind of comparisons again?

Well I didn’t other than quoting the book. There were no other indications of a comparison, other than the fact that I quoted from the book.

Oh yeah, sure there’s a hint of that. And I also feel that. An oppressed people who oppresses a people – that’s very much the case of what is being said with that, and what I want to say.

Did any of the discussions or arguments that came out of the stuff, did that make you rethink anything, or change your thinking at all?

Just that I may have unnecessarily hurt some people’s feelings. Yeah, it could be. By using that particular text, because that book, John Hersey’s book was very well known, not just in the Jewish community, it was one of the main novels that came out of the post-Holocaust era. And so it’s sort of in itself like a little Bible of Holocaust literature. People felt just automatically stepped on without reading what I quoted, they automatically felt insulted. That kind of thing may be unnecessary. I don’t know.

It seems to me one way it bothered people is it makes this sort of equation that says Israelis today are like Nazis.

But you’re making the equation of the victims.

So why wouldn’t people make the equation of the oppressors?

Right. And that happened. People did make that, as if that was my intent. And it wasn’t my intent. But as I’m saying, maybe I would tread more carefully with the text, the chosen text. But I wish people would have referred to the text directly, and they didn’t. They only were insulted by the fact that I used the book and not the actual liftings of text. So it was very unspecific.

Does this one [the show of new paintings] have that kind of connection?

No it doesn’t because the texts in this case don’t use any other text, emails of somebody who knew the family in question very well and related the events as they unfolded to his friends in Seattle.

Well, it’s something that we can’t talk about because it’s so electric. It’s very difficult to even begin a discussion. It seems like you’re consciously going there because of that.

Yeah, I think it’s unfairly so. I think it’s awful that the Western community does not interfere with what Israel’s doing as an occupation force. The Western community does not do anything about it. They don’t even speak up against it. They don’t do anything. They basically serve as the Israeli propaganda for the events there. They give us what the embedded reporters give us from Iraq, which is the picture of the perpetrators.

Because it’s well known. It’s continuously in the papers.

They also seem to say your work doesn’t represent that the Israelis are doing this to fight terrorism from the Palestinians. And so that by not representing the Israelis’ problems you’re being unfair.

I don’t know. It’s like when you go to any war naturally the guerillas who rise up against occupation forces are to be blamed for atrocities they commit, but that’s not on the same page with the atrocity of the occupation. Take an extreme case like the Nazis in Poland. Naturally what the Polish and the Russian guerillas probably did against the Nazi soldiers was probably pretty horrible, dismembering them or burning them or putting them into cement walls, or whatever they could to, probably, to punish them. Is that on the same page as the very fact of the invasion? It’s not. It’s not excusable, it’s morally wrong, but still you know our humanity will say you know that is more excusable than the other thing, the thing itself, the big thing, which is the occupation.

There is no ethical excuse for any of this violent dealings and revenging and so on. There isn’t. Ethically this is wrong. But a state always takes exemptions from these ethics. So as the U.S. does. And so does Israel. It’s a fascist democracy just like the U.S. is. And these fascist democracies that are not real democracies, but fake democracies, they do as they wish. They build their ethics with the help of ethics professors as they go. They just have to find the right ethics professors, and they do all the time. They pay enough and so they find another ethics professor. That’s the sad story.

Pictured: When Bread and Puppet Theater performed “The Battle of the Terrorists and the Horrorists” at the BCA in February 2007 some scenes referenced the wall Israel has erected around Palestinian communities in the West Bank. Photos copyright The New England Journal of Aesthetic Research.

I have responded to some of Schumann's assertions here.