Close and Storr to speak at BU

Artist Chuck Close and curator Robert Storr will have a public conversation at Boston University at 6 p.m. Thursday, Nov. 1, as part of the college’s fourth annual Tim Hamill Visiting Artist Lecture Series. The talk is free.

Close, a major New York painter, photographer and printmaker, is known for his giant portraits based on photographs. They began in the late 1960s as astonishing photorealist heads in black and white, then color. He later switched to portraits built from grids of colored dots and ovals that were at once abstract and, when you got back a bit, coalesced into a sort of dot-matrix realism.

As I’ve written in the past, portraits remain a constant in Close’s equation, even as over nearly four decades he’s changed variable after variable and set the process in motion again. It’s clear there’s something charged in his choice of imagery, but for him selecting a single subject all those years ago – the human face – cleared a variable out of the way so he could focus his attention on a dispassionate examination of formal permutations and an interrogation of visual perception in the age of mechanical reproduction.

He’ll be joined by Storr, the dean of the Yale School of Art, a consulting curator at the Philadelphia Museum of Art, and former curator at New York’s Museum of Modern Art. Storr was commissioner of the 2007 Venice Biennale, as BU’s press release notes, “the first American invited to assume that position.”

In “In Lieu of Modernity,” at Space Other, Alexander Apostol of Madrid examines the failed utopian promise of modern architecture in his native Caracas, Venezuela. The main event (as I wrote in this review) is 13 six-foot-tall photos of buildings from his Residente Pulido (2001, 2003) series: they line the gallery’s main hall as if it were a city street. On one side, Apostol digitally removed doors and windows from modernist Caracas buildings. The other side features apartment buildings with windows and doors physically blocked up because of crime. It’s a sad, uncanny brew of images and ideas. The city looks closed up, turned in on itself, the buildings becoming unsettling sculpture, eerie monuments, mausoleums. The videos that fill out the exhibition are less interesting.

In a report published Wednesday, Steven Litt of The Cleveland Plain Dealer offers more reasons to doubt the authenticity of the Alex Matter “Jackson Pollocks” on view at Boston College through Dec. 20. Matter claims he found 34 Pollock-style paintings in his late father’s effects in 2002. But 17 of the 26 paintings scientists have studied so far contain materials that were patented after Pollock’s death in a 1956 car wreck. Now Litt reports:

in interviews and e-mails over the past month, some of the world's leading experts on the pigments say it is highly unlikely that Pollock could have leapfrogged the known history of paint in the 20th century not just once, but several times or more.

Donald Farnum, a retired Michigan State University professor credited with the 1974 discovery of an organic pigment that has shown up in 10 of the possible Pollocks, said … that he has found no evidence in scientific literature that anyone previously tried the chemical reaction that led to his discovery.

"I also believe," Farnum wrote, "it is unlikely to the point of fantasy to believe that someone conducted the reaction, isolated the pigment, did the studies necessary to demonstrate that it was a stable, viable paint pigment, formulated the paint and provided it to Jackson Pollock without ever revealing that they had done that in the literature."

Matter claims he found the paintings wrapped in brown paper scribbled with a note – supposedly by his father, a pal of Pollock’s – attributing the paintings to Pollock, identifying when he painted them and what sort of paints he used. If the science holds up, this note is much in error – and highly suspicious. As I’ve noted in the past, these extensive details suggest that if the “Pollocks” aren’t real, then this may not be an innocent mix-up but a fraud. 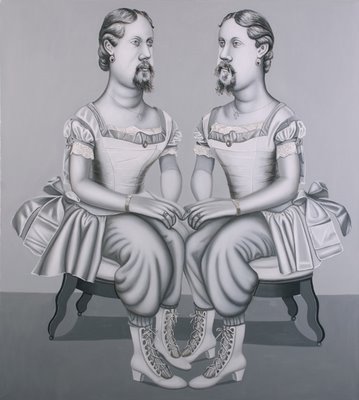 The Chesterly Sisters (2007) depicts mirror-image twins in satiny gowns perched next to each other on a bench. Their goatees, large hands, and broad shoulders suggest they’re gentlemen. Or cross-dressing gentlemen. But their hairdos, attire, and wasp waists suggest they’re ladies. Or bearded ladies. Barrett mixes and matches anatomy and reflects it with a funhouse-mirror eye so that typical gender cues turn all slippery.

She’s been playing this intriguing game for years now... 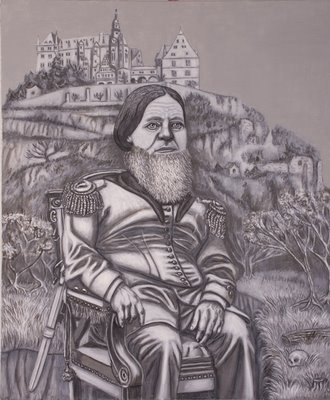 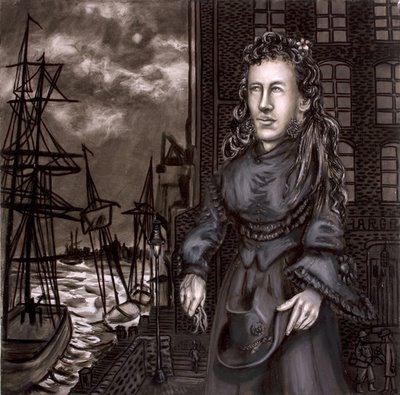 Laura Donaldson, who left her job as gallery director at the Boston Center for the Arts’ Mills Gallery in August, scores a bit of a coup with her goodbye show at the gallery: Scottish artist Martin Creed’s “Work No. 227: The Lights Going On and Off.” It’s a recreation of his 2001 exhibit at the Tate Britain in London that won him that year’s Turner Prize (presented to him by Madonna, who made a bunch of great comments at the event) and is now part of the permanent collection at New York’s Museum of Modern Art.

The installation (as I wrote in this review) consists of the empty Mills Gallery with the lights flicking on and off every five seconds in a leisurely strobing. (It’s interesting to compare it to Welsh artist Cerith Wyn Evans’s 2005 exhibit at Boston’s MFA, which had seven crystal chandeliers flashing Morse code.) Creed’s installation brings your attention to the gallery lighting (duh) and architecture (because you want to avoid bumping into it when the lights cut out). At the opening, the effect made it challenging to pick out friends across the room. I’ve been back to see it a second time. It’s mildly amusing, but a forgettable minimalist goof. 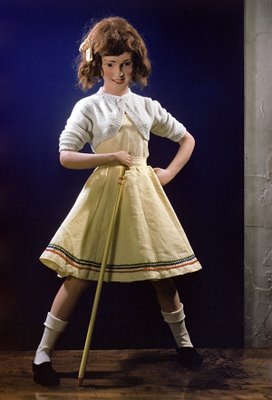 The Danforth Museum bills its Morton Bartlett exhibition, which closes tomorrow, as the first Boston-area show of the weirdo underground Boston dollmaker and photographer. He and his curious hand-crafted plaster children, which he photographed in narrative tableaux, appeared in Yankee magazine in 1962 but remained little-known until they were rediscovered after his death, in 1992. The nine photos here (as I wrote in this review) have the look of children’s-clothing-store display windows gone wrong — specifically the eerie sexual charge shot through these scenes.

The work here isn’t as incandescently weird as Bartlett gets (check out Marion Harris’s 1994 Bartlett book Family Found for gatherings of his naked, anatomically correct kid dolls), so the show winds up being a bit flat. At its most affecting, Bartlett’s art is a disconcerting combo of innocence, flirtation, and latent pedophilia. And the dolls’ expressiveness — irritation, anger, crying — creeps under your skin.

Pictured from top to bottom: “Girl with Baton,” “Girl with Stuffed Animals” and "Hula Girl.” 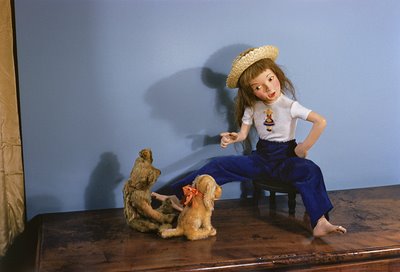 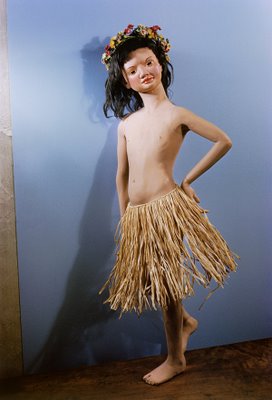 A free panel discussion of the late Boston artist Sister Corita Kent and the history of her 1971 rainbow design for the National Grid gas tank (above) in Dorchester will be held at the Savin Hill Yacht Club, 400 Morrissey Blvd., Boston, at 7 p.m. Saturday, Oct. 27.

Here’s the beginning of my preview:

The question that arises when you consider the dazzling screenprints of … Sister Corita Kent is: how could an artist so good be so ignored? I suspect Kent, who’s best known in town for her cutesy rainbow stripes painted across the giant National Grid gas tank off Route 93 in Dorchester, is overlooked because she was a feminist who made boldly political and religious work. Three strikes and you’re out.

One of the persistent questions about the rainbow gas tank is whether Ho Chi Minh’s profile was painted into one of the stripes, as some have claimed. I went through some of Kent's papers at Harvard’s Schlesinger Library some months back and found a February 1986 article in the Bedford Minute Man in which Kent answered this question:

Yes, but I didn’t put it there. How do you explain it to the press? It is a common practice to look at clouds and see things. I always said it was an accident. But after watching the [television] series on Vietnam last year, I’ve decided it was a miracle.

Related:
I also wrote about Kent when her work was included in the “Dissent” exhibit at Harvard’s Fogg Museum last winter.