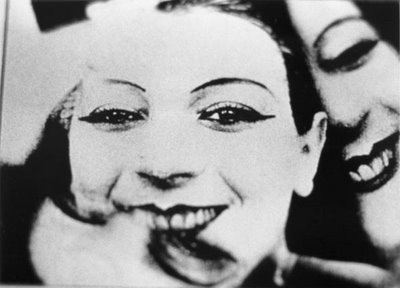 Here’s the beginning of my review of “Music Video/Silent Film: Innovations in the Moving Image” at the RISD Museum:

Michel Gondry’s 2002 music video for the White Stripes’ garage punk ditty "Fell in Love With a Girl” — the one in which he animates Jack and Meg White in Legos — is one of the great motion picture feats of our era. And it’s pretty dang cool too.

Now atop all its accolades (2002 MTV Breakthrough Video, etc.), it rumbles into the RISD Museum for a scholarly exhibit dryly titled “Music Video/Silent Film: Innovations In the Moving Image.”

Curatorial assistant Maya Allison mixes recent music videos by Gondry, Chris Cunningham, and Evan Bernard for the Chemical Brothers, Beastie Boys, White Stripes, Leftfield, and Afrika Bambaataa with art films from the 1920s by Fernand Léger, Man Ray, Hans Richter, and Dziga Vertov. Her point: old art flicks and new music videos pursue similar formal experimentation and themes as they abandon narratives for musical structures like rhythm, repetition, and tempo. Her groupings get you thinking about the formal construction of the music videos in ways you might not usually, and give you a sense of how the old art films may have felt radical, hilarious, and crazy cool when they first appeared. The result is a fun small show that feels suspiciously good for you. 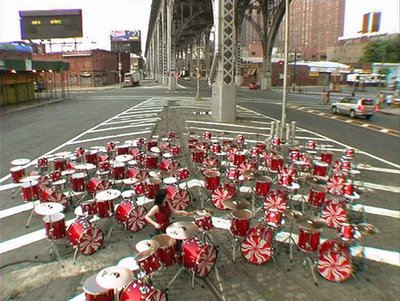 The Kabakovs' “Center of Cosmic Energy” 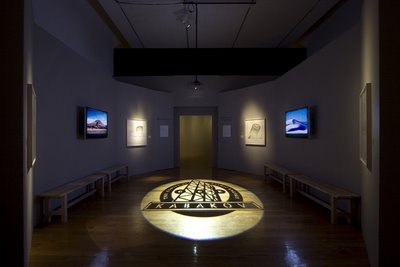 Here’s an excerpt from my review of Ilya and Emilia Kabakov’s “The Center of Cosmic Energy” (warning: spoilers ahead) at Tufts University:

The room gets progressively lighter as the recorded spiel goes on, until it’s sunny bright and the voice concludes, “The Communication with the Cosmos building, in which you are now sitting, has been constructed upon the actual archæological site in Medford where the ‘arched antennae’ and the ‘reservoirs’ were found. Sitting within this structure, your ‘intuition of 60 degrees’ has been activated and you most likely feel a surge of cosmic energy flowing throughout your body.” And I did feel a little tingle.

Here’s the beginning of my review of “Trainscape” at the DeCordova Museum:

The DeCordova Museum’s “Trainscape: Installation Art for Model Railroads” is a great, wild, flawed 14-artist circus. Your first sights from the gallery entrance are dangling cartoon clouds, a giant gent in a stovepipe hat, mini mountains, cascading white buildings, pink petals floating in midair. There’s lots of motion as four trains clickety-click out from the center of the room and circulate through 12 installations commissioned by curator Nick Capasso and company. My first reaction wasn’t much different from that of the little girl I overheard exclaim, “This is awesome!”

Pictured from top to bottom: "Land o’ Lactation" by Fitchburg couple Ellen Wetmore and Jeff “Jeffu” Warmouth and "Here, There and Everywhere" by Joy Wulke of Stony Creek, Connecticut. 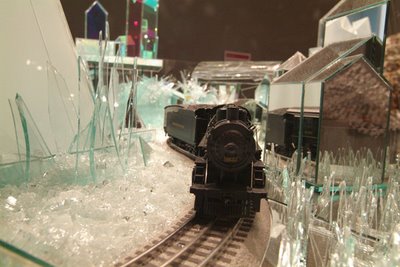 In Lara Lepionka’s latest project “Attention Shoppers,” the Gloucester conceptual artist turns her attentions to the staff at a Gloucester Shaw’s supermarket.

Lepionka’s art is a form of anthropology and activism. Here she photographed supermarket staffers at work – a cashier, a deli guy slicing meat, a woman rolling what could be egg rolls, a man unpacking fruit in the produce department. She carved these scenes of anonymous workers into styrofoam trays, like those used to package meats and produce. The images float in the middle of the trays, surrounded by dazzling carved patterns. The trays were then photographed, enlarged and turned into five different posters (pictured here) that she hung above the checkout lines at the supermarket. 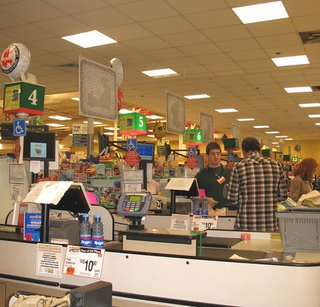 “The carvings themselves reflect the repetitive and often unseen work of the employees,” Lepionka writes. “The intention is to recognize the work people perform and to be reminded that all work is ultimately linked to the lives of others. In this way, the art reveals and appreciates the humanity behind products and services on which we depend.”

Lepionka has seemed on the verge of something sharp for a while, and here in particular her craftsmanship is impressive (see here) and she’s spot-on in her choice of materials and exhibition site. But I wonder if the installation would be more powerful if the carvings themselves were displayed instead of poster-sized photographic reproductions (perhaps the carvings would need to be made larger). Her manual craft intentionally echoes the labors of her subjects, but in reproduction this echo gets muffled. It isn’t clear that the poster images depict carved styrofoam trays. Because of this the artworks get lost among the usual corporate boosterism of supermarkets’ look-at-our-happy-employees posters. 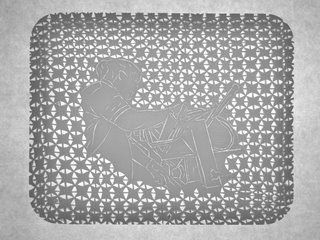 Lepionka’s social awareness conceptual art has been addressing the theme of how people and communities are interconnected through people’s labors for several years now. For her “Hidden Value” project in Northampton’s Pulaski Park last year, she installed barstools, desks, trash cans and faux books marked with texts taken from her interviews with five Northampton people – a waitress, college professor, trash collector, librarian and grocery store owner – and others whose lives they touched.

For her 2005 “Talking Towel” project, she had towels embroidered with responses staff and members of the Gloucester YMCA made to her surveys asking about “their feelings and thoughts on Gloucester and the work they do here and beyond.” The towels were then made part of the supply of towels loaned to Y visitors for workouts. 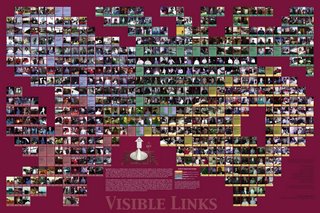 One of her best pieces is "Visible Links" (pictured at left, click on image to see it larger), a poster-chart she made in 2000 featuring photos of numerous people who had a hand in making or distributing a common dinnerware set, from miners to factory laborers to truck drivers in the United States, Poland, Indonesia, Caribbean and South Africa. The web of human contributions was made apparent, dozens of individual contributions were recognized, and you marveled at Lepionka’s feat of tracking everyone down.

Related: A report on Lepionka’s “Attention Shoppers” in the Gloucester Daily Times. 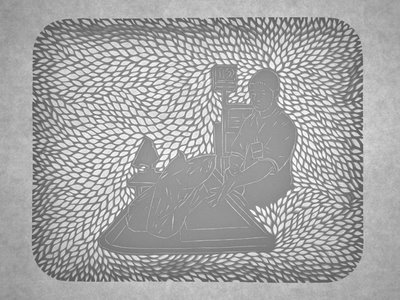 The Williams College Museum of Art has sent a press release announcing that Deborah Rothschild, who has worked at the institution since 1981 and is currently its senior curator of modern and contemporary art, will retire on Oct. 1. Among her exhibitions are the museum’s current show "Making It New: The Art and Style of Sara and Gerald Murphy"; “James Turrell” (1991); “Introjection: Tony Oursler’s Mid-Career Survey,” (1999); and “Constructs for a Brave New World: El Lissitzky’s ‘Proun’ and ‘Victory Over the Sun’ Portfolios” (2004).

The Globe’s Geoff Edgers posts comments from Johnson, who joined the Globe just over a year ago, here.

I don't know Johnson (a solid critic). But it seems likely that his experiences in Boston weren't quite as thrilling as he made them out to be in his exit interview. He hearts New York? That's the reason? It could be, but he needs to explain further.

And Modern Kicks chimes in:

Johnson set a high standard in a short time, one that was definitely noticed locally.

Is the video game “BioShock” art? "BioShock," produced by the Quincy, Massachusetts, branch of 2K Games, has sold 1.5 million units since it was released in August. On Sept. 15, Washington Post blogger Mike Musgrove wondered if it’s more than just your average sci-fi first-person shooter set in a mutant-infested underwater city:

Video game fans sometimes like to argue that this medium is the world's next great art form, but there never seems to be an abundance of titles that provide any confidence that games are working their way out of the cultural ghetto. “BioShock,” an action-packed title that also has some serious underlying themes, seems as if it could help make the argument that games could be regarded as a "serious" art form able to comment on the human condition, and all that stuff.
…
[Pulitzer Prize-winning Post book columnist Michael] Dirda said the game showed him that video games "obviously have artistic value" and will likely become more of a recognized art form.

So: Is "BioShock" art? "I would hesitate to go that far," he said after a short pause.

When there's a video game that makes the player depressed, that's when the medium might be onto something as an art form, Dirda said. It's easy to like something that makes you feel powerful in its fantasy world, as games generally do. But would anybody play a game that makes him sad?

Related:
Washington Post interview with "BioShock" head designer, Ken Levine, in which he talks about video games as art – or not.
The Boston Herald reports that Levine studied theater and writing at Vassar and dabbled in writing scripts in Hollywood, before finding work with a Cambridge game designer.
Reports and reviews in the Boston Phoenix, Boston Globe and Patriot Ledger (“A Quincy company’s much-anticipated video game is testing the limits of the ultraviolent gaming genre with a strategy that enables players to kill characters resembling young girls.”).
Update: PCWorld blogger Matt Peckham weighs in.

That [Fenway’s director of grounds David] Mellor is a maestro at his craft is obvious to anyone who sees the field, either in person or on television. But he was also a pioneer in lawn design, creating one of the first truly intricate plaids ever seen on a baseball field, a veritable Scottish kilt of grass, while with the Milwaukee Brewers in 1993.

"Certainly groundskeepers had tried different things, but they'd never taken it to the level David had," said Roger Bossard, the Chicago White Sox's head groundskeeper for 41 years. "Obviously everyone is doing it now. But David was, once again, the father, the innovator, of these patterns."

Harvard parts with bells. Harvard University has given a rare Russian bell to its original home, Moscow’s Danilov Monestery, according to Harvard and Bloomberg reports. The Soviets apparently banned all bell ringing in 1918 when they tried to stomp out the Russian Orthodox Church and four years later began to destroy church bells. Eighteen bells survived and found their way to Harvard after an American “plumbing magnate” bought them as scrap from the Soviet government and subsequently donated them to the university. A Russian oil and mining tycoon has paid to have replicas cast for Harvard in exchange for the originals (which you can sorta hear here).

And Harvard is planning a bell festival and symposium for June 1 and 2, 2008, with bell ringing and talks on bell casting and the history of the Harvard bells.

For more on the bells, look here and here. 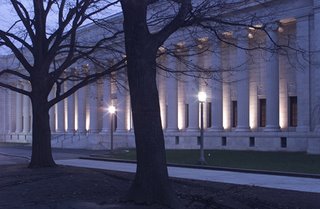 The Boston financial firm State Street Corporation has donated $10 million to Boston’s Museum of Fine Arts, the two institutions announced today. The gift is “the largest corporate donation in the museum’s history,” according to a joint press release. As thanks, the museum will rename its Fenway entrance, closed since the early 1980s, as the “State Street Fenway Entrance” when those doors reopen to the public in the spring 2008 (if all goes according to schedule).