Andrew Oesch and Jean Cozzens have been building “Magic City Repairs,” mini metropolises of paper and cardboard at Providence’s Stairwell Gallery and Dirt Palace. As I said in my review, they’re a pair of Providence artists in the second-half of their 20s with the big idea that by inviting all comers to lend a hand cutting and pasting together a toy city they can help people feel like maybe, just maybe, they can have some say in the future of their world. 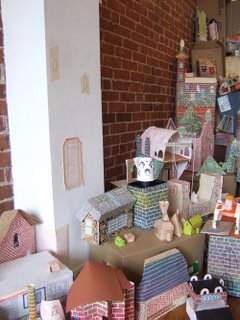 “We’re modeling a way we want to exist in the world,” Oesch tells me, “which is this subtle democratic vision.”

“That order and organization don’t have to come from above,” Cozzens adds. “It can be mutually created and shared.”

The Stairwell Gallery version (pictured here) is a work-in-progress that began with a waffles and glue-gun brunch-art-happening on May 27. Oesch and Cozens provided the raw materials, some 90 people (some pictured here) provided the labor. In the storefront window of Dirt Palace, where Cozzens lived for a couple years, the artists are building the cardboard city by their lonesome which will be on view through June 17. 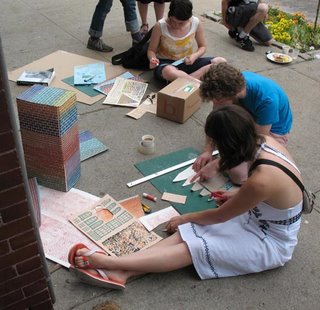 The two installations radiate verve and fun, which is an accomplishment, but I wish the ideas the duo is scratching at – ideas about how to get people engaged with the direction of their community – were more embodied in the end products. But ultimately the point is the process and collaboration – so to get the full effect, join the crowd at an art-making, city-building party at Stairwell Gallery from 11 a.m. to 8 p.m. June 14, with potluck dinner around 6.

Photos by Cozzens and Carla Childs. 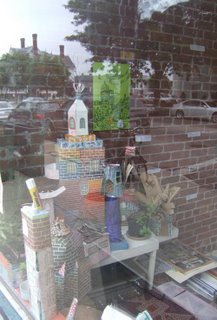 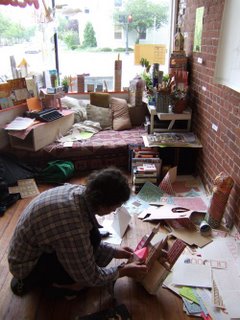 Montserrat College of Art has hired Helena Judith Sturnick to serve as interim president of the Beverly art school beginning June 25. She fills the shoes of Stan Trecker, who leaves this month after leading the school for five years.

Sturnick has served as president of The Union Institute and University in Cincinnati, Vermont College in Montpelier, Keene State College in New Hampshire, and the University of Maine at Farmington. And so on.

The Boston Center for the Arts has just officially announced the changes to programming at its Mills Gallery. The press release is a bit unclear about the particulars, but it seems that gallery programming will no longer be curated and organized by a gallery director, but will primarily be put together by guest curators overseen by a new visual arts manager and cultural advisory board. Gallery director Laura Donaldson is scheduled to leave at the start of August because the changes – as the BCA’s announcement explains – eliminate her position.

It’s unclear how much of a change this represents for BCA programming since Donaldson only curated one of the Mills Gallery’s five main exhibitions since last September (not including exhibitions in the gallery’s small project space).

According to the BCA’s press release, at the institution’s annual meeting on June 20 officials will “unveil a new chapter in its programming,” including:

a new curatorial model for the Mills Gallery that continues its groundbreaking exhibitions of contemporary art, while opening its doors to diverse artistic voices and initiating a new series of performance art, film screenings, and poetry and play readings; and the deepening of the BCA's commitment to make the arts accessible to urban youth and neighborhood residents through its Cultural Partners Program.

…The restructuring of the BCA’s Arts & Community Programs Department will result in the elimination of the position of Mills Gallery Director. Laura Donaldson, who has held that position since 2004, will continue to offer her innovative perspective during the coming year as one in a series of guest curators.

A Curatorial Advisory Board will advise [Arts and Community Programs Director Wendy] Baring-Gould and a new Visual Arts Manager, who will assume leadership of the gallery and direct the 2007-08 exhibition season. Advisory Board members include: Edmund Barry Gaither, Director and Curator of the Museum of the National Center of Afro-American Artists (NCAAA); Camilo Alvarez, Director of Samson Projects; Barbara Krakow, President, Barbara Krakow Gallery; Stella A. McGregor, Director of The Cloud Foundation; and Carole Anne Mehan, curator of Vita Brevis at the Institute of Contemporary Art. Other Advisory Board members will be announced.

My previous posts on this matter are here and here.

One of the questions that comes up with Jenny Holzer’s haunting exhibit “Archive,” which closes at Boston’s Barbara Krakow Gallery today, is whether such gallery art can be effective as political art.

Here the New York-based RISD grad (MFA 1977) screenprints enlarged copies of declassified U.S. government documents that recount the errors and crimes of our fight against Al Qaeda and wars in Afghanistan and Iraq. An Army translator reports that Special Forces troops allegedly shocked a prisoner with electricity in Afghanistan in 2002. A military medical examiner’s report concludes that a dead Pakistani man was most likely kicked to death in American custody in Afghanistan later that year. FBI agents report Guantanamo prisoners kept from sleep with strobe lights and loud music and “baptized” by an interrogator posing as a Catholic priest. When an agent sees a prisoner on a cell floor, crying, his nose apparently bleeding, American interrogators claim, “the inmate had become upset with them and threw himself to the floor.” 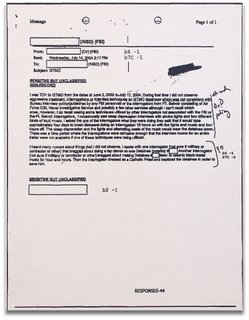 If you’ve followed the news much in the past few years, the gist of this stuff is familiar. So I figured the documents, which Holzer presents without changing, would feel like old news. But reading the first-hand accounts (as you can do by clicking on the images here or visiting the link to the show above) is devastating, depressing, angering.

I often feel that artists who confine their political art to galleries are scaredy cats, hiding out in order to avoid the hurly-burly of worldly political engagement. But the power of Holzer’s screenprinted paintings – small enough to fit over your couch, with prices starting at $32,500 – shows how political art in galleries can work. (My full review is here.)

Holzer first presented these works as projections onto the facades of George Washington University and New York University buildings. These are long, wordy documents. It’s hard to tell how they would feel in that mode. How legible were they?

Powerful political street art often doesn’t work well in galleries. The short, simple, direct messages that are often required to reach people on the street can feel too simple and hectoring in galleries. Galleries are good places for long looking, reading, for thinking things out, and thus for quiet, philosophical, complex political art.

And that’s why Holzer’s screenprinted paintings are so effective here. As gallery pieces we can take our time with them, absorb their complexity, and feel their full horror.