Here’s my review of the RISD Museum's “Feathers, Flowers, Talons and Fangs: Power and Serenity in Japanese Nature Prints,” an exhibit of Edo woodcuts that’s so wonderfully serene that it gets, well, a bit boring. I also touch on the museum's “Nuance in Nature: Birds and Flowers in Japanese Textiles,” which has some dazzling robes and kimonos.

'We Are Where We Are Not’ at Gasp

In “We Are Where We Are Not” at Brookline’s Gasp gallery, curator Jason Kalogiros assembles 13 artists “whose work revolves around different aspects of identity construction.” 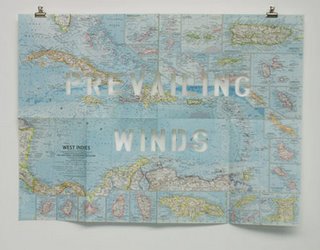 Gabrielle Teschner of San Francisco presents a series of altered old maps hung floating a few inches out from the wall. “Prevailing Winds” is cut out, Ed Ruscha-style, from a map of the "West Indies" (at left). The word “Legend” is sliced from a map of Vietnam, Laos and Cambodia. “Here lies Iran” is cut from a map of West Virginia. “Here Lies Iceland” cut out from west Africa. Her interventions seem like the start of an idea still in development, but they begin to speak of the history of mapping and naming places – the power, money, violence and colonialism behind it. To me, they also seem to address how these forces are manifest when folks like the Bush administration marshal doubletalk to redefine or define away the reality right in front of our eyes. 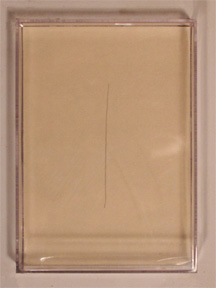 Breck Brunson of Washington, D.C., presents photos like “Me as a Toilet Scrubber,” in which he sticks his head in a toilet bowl. In “Me as a Chair (In Use),” the artist is propped up against the wall in a chair-like pose and a white guy sits on him. In “Me as a Jacuzzi,” his head is submerged under the water in a tub as he blows bubbles. “Me Hair Straightened Out” (at left) is a single, 3-inch strand of dark hair running like a straight line down the middle of a small frame. These charm simply as absurdist stunts, but because Brunson is African-American, they’re also charged with questions about racism. His modus operandi – laugh-wince art – feels a bit too familiar, but there’s electricity in the feelings he churns up. 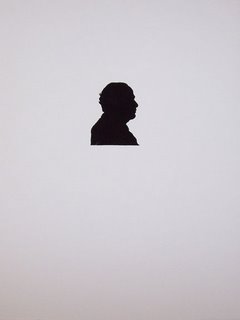 Andrew Tosiello presents “Twenty-five Silhouette Portraits of Italian-American Mobsters” (one at left) in a five-by-five grid of exquisite little black gouache profiles on crisp white paper. Tosiello, who grew up in Medford, studied at BU and is now working on an MFA in San Francisco, aims to use the mafia to address immigration, assimilation, capitalism, the construction of identity, and what he sees as the mafia’s “rise to prominence through similar means and at a similar rate as the United States.” Which was news to me after looking at the work because his paintings are too straightforward to embody the complex analysis he talks about. The work needs to do more to connect the dots.

The show also includes work by Edward Lee, who studied at Boston’s Museum School, and Sam Moyer, who spent part of her childhood in Hanover, Massachusetts, and apparently now lives in Washington, D.C.

Ninja Turtles co-creator Peter Laird, who lives near Northampton, created the Xeric Foundation with a $1 million investment in 1991. Interest from that endowment – which Xeric grants director Kendall Clark tells me has about doubled since – funds the foundation’s grants totaling some $120,000 annually to western Massachusetts nonprofits and to self-publishing comics artists from the United States and Canada. The comics grants have been a major force in encouraging independent, ambitious comics.

So will money from the film go to the foundation? “Only indirectly, if needed,” Clark says. And right now with the endowment doing well, she says, it doesn’t seem needed.

In the wake of the RISD Museum’s “Wunderground” show last fall, Providence art impresario Sara Agniel and Providence poster-maker and rocker Will Rodier are leading an effort to create a photographic archive documenting the decade of Providence 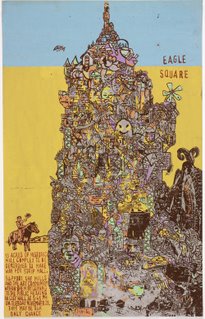 underground posters that were assembled for the show. As I reported here, they hope to eventually house the archive at a Providence institution or on their own secure website archive.

They're looking for help in tracking down all the poster artists to get the artists' permission to include their work. (Send info or feedback here.)

And a fund-raiser is being held at Providence’s AS220 from 2 to 7 p.m. Sunday, March 25, to help pay off the $4,300 cost of photographing the posters and computer thingamajigs to store the digital images. Admission is $6. There will be raffles, a silent auction of posters by Providence artists, performances by Lightning Bolt (featuring Fort Thunder co-founder Brian Chippendale, whose work is pictured here), Lolita Black, The Set of Red Things, and Bronhard/Going/Public, and cheap beer. 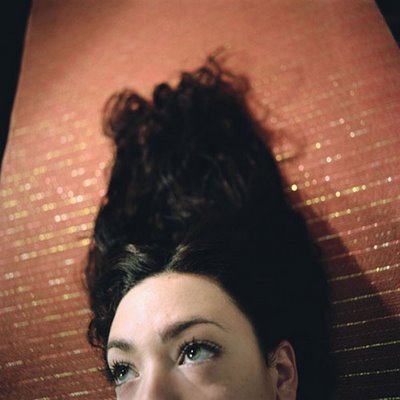 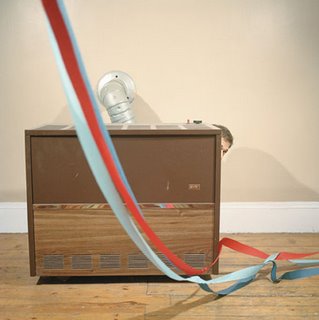 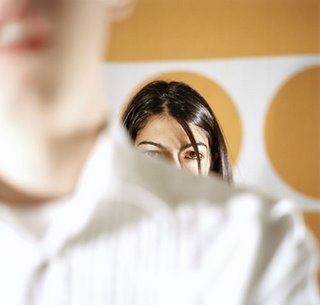 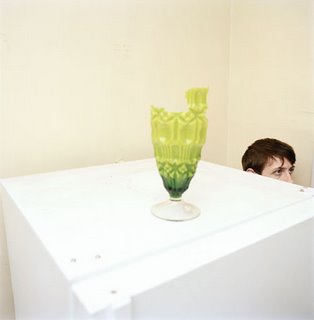