“Symbols of Power: Napoleon and the Art of the Empire Style” 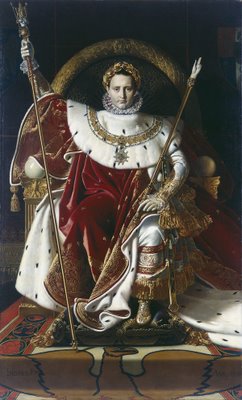 Here’s a couple excerpts from my review of the Boston Museum of Fine Arts’ new exhibit “Symbols of Power: Napoleon and the Art of the Empire Style, 1800-1815”:

Some say Napoleon Bonaparte was at heart a military man whose personal tastes ran to the simple and practical. But the brilliant general knew the power of appearances. His infantry wore bearskin hats intended to make them appear taller and drummed and hollered war cries to intimidate enemies. As a ruler, Napoleon trumpeted his authority by adopting the historic trappings of royalty and commissioning artists to celebrate his glories.

"Symbols of Power: Napoleon and the Art of the Empire Style, 1800-1815," which opens Sunday at the Museum of Fine Arts, surveys the opulent Empire style that spread across Europe as Napoleon toppled old monarchies and built an empire that at its height in 1812 stretched from Spain and Italy to the Netherlands and the edge of Russia. This magnificent exhibition, organized by Les Arts Decoratifs in Paris and the American Federation of Arts in New York, presents some 190 works, many of which have never been seen outside France.

The emperor stares soberly from Jean-Auguste-Dominique Ingres's astonishing 1806 painting "Napoleon I on His Imperial Throne" (above). He's dressed in a lavish ermine and velvet robe embroidered with gold bees and holds a replica of Charlemagne's scepter. Ingres achieved a startling verisimilitude: The larger-than-life Napoleon looks as if he could step out of the 8-foot-tall canvas. But the portrait was rejected by the regime and critics: Napoleon had since abandoned references to Charlemagne to appear more modern, the monumental frontal pose was too old-school gothic, and it didn't look enough like Napoleon.

But this masterpiece radiates from the heart of this exhibition. Napoleon could be carved from stone, but curiously he seems to levitate off the floor, as if he is magic. The effect has something to do with how daintily his foot perches on the pillow footrest and how his body and throne disappear in his flowing robes. 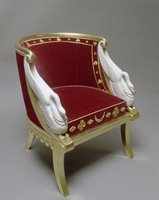 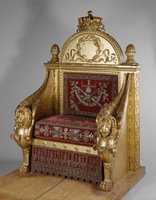 Pictured from top to bottom: Jean-Auguste-Dominique Ingres “Napoleon I on His Imperial Throne,” 1806, from Musée de l’Armée, Paris; gondola chair from Josephine Bonaparte’s boudoir at Saint-Cloud, about 1802 to 1803, attributed to Jacob Frères, designed by Charles Percier, from the Musée National des Châteaux de Malmaison et Bois-Preau, Rueil Malmaison; on deposit from the Mobilier National, Paris; and throne, 1805, made by François-Honoré-Georges Jacob-Desmalter, embroidery by Picot, designed by Bernard Poyet, from Musée des Arts Décoratifs, Paris. All courtesy of the American Federation of Arts.