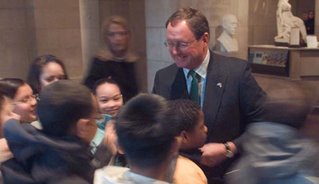 Before taking over the MFA in 1994, Rogers was a deputy director and then deputy keeper at London’s National Portrait Gallery.

In March, the Globe’s Geoff Edgers asked Rogers if he had eyes for the National Gallery gig and was told: "The National Gallery was my dream job … until I came to the Museum of Fine Arts, Boston! … I am honored to be at the MFA and this is where I want to be. I’m here for the long haul."

The Guardian listed Rogers as a probable candidate in July, but called his chances: “Unlikely.”

Haden-Guest reported Friday that Rogers’s name was floated as one of the “names under discussion” to become the National Gallery’s director, but that “the shortlist is rumoured to consist of three names.” And Haden-Guest says Rogers ain’t on it.

A spokesman for the London’s National Gallery tells me:

The interviewing process for the National Gallery directorship is ongoing and we expect to have a decision towards the end of November.

There has been a good deal of press speculation regarding “top candidates” and several names have been mentioned in the press, purely as speculation. I'm afraid that I have no further information on the interviewing process or which individuals are in the running.