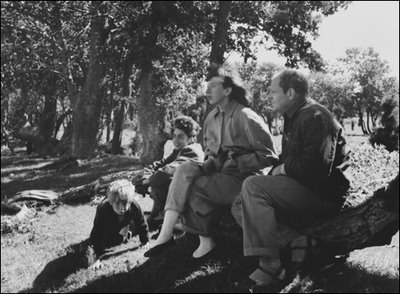 Here’s the opening from my review of “Pollock Matters” at Boston College, which presents more than 20 disputed "Jackson Pollocks," and also assembles more than 170 artworks and ephemera to make the groundbreaking argument that the photographer and graphic designer Herbert Matter was a key inspiration for Pollock’s signature poured paintings.

In 2002, the year after his mother died, as Alex Matter tells it, he found a brown paper package in his father’s storage locker on Long Island. Inside was a pile of small paintings that resembled the work of Jackson Pollock. A note on the outside said that’s just what they were.

Matter’s account is plausible. His parents hung out frequently with Pollock and Pollock’s wife, Lee Krasner, at their homes and studios on Manhattan and Long Island. Alex’s father, Herbert, who died in 1984, was said to be making small purchases of Pollocks by 1944. Alex Matter reported that though some paintings had disintegrated inside the package, 28 had survived. He added that he’d found six more Pollock-style paintings among his dad’s effects.

The note, said to be in Herbert’s hand, identified the hoard as “Pollock (1946-49)/Tudor City (1940-1949)/32 Jackson experimental/works (gift + purchase)/ Bad condition./ 4 both sides. All/drawing boards./Robi paints./MacDougal Alley 1958.” If they really are Pollocks from 1946 to 1949, they represent Pollock very early in the development of his drip technique, when he was experimenting in the run-up to his breakthrough poured paintings of 1947. It was an astonishing find, one that could be worth millions. So people began asking questions.

I’ve already written extensively on the debate surrounding the authenticity of these paintings. If you're curious, try starting here.

Pictured from top to bottom: Herbert Matter’s 1948 photo of Alex and Mercedes Matter, Lee Krasner and Jackson Pollock hanging out on Long Island; and a painting dubbed “Untitled No. 2” that Alex Matter says he found in a group of Pollock-style paintings in his father’s effects in 2002.