The standouts among the 120 masters students featured in the Rhode Island School of Design’s “Annual Graduate Thesis Exhibition” at the Rhode Island Convention Center are Rachelle Beaudoin and Millee Tibbs. As I write in my review: 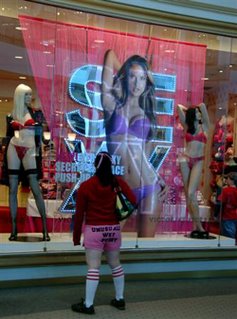 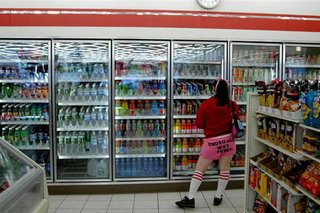 It’s surreal when she wears them while browsing the refrigerator section of a convenience store. And it’s giggly and uncomfortable when she wears “Cock Sucking Queen” shorts white waiting for Ben & Jerry’s ice cream in front of a mother with two boys. “Cheer!Shorts” evolved from a classroom performance last fall (check out her blog), and it’s better and more charged by moving into public with her disconcerting questions about feminity, feminism, and the differences between our fashions and the way, say, female chimps’ butts turn pink when they’re in the mood for love. 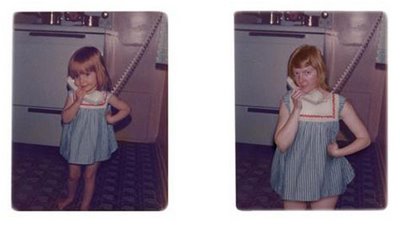 Tibbs Photoshops portraits of herself into snapshots of herself when she was a little girl. In then-and-now pictures, she lays on the floor with other kids in what looks like a classroom, talks on the phone in a kitchen (above “Millee talking to Daddy, 2007”), and poses with a dog. Things get wicked weird and interesting when she reenacts nude pictures. A little kid naked and mugging in a sudsy tub is cute, but a grown woman in the same pose is something else altogether.

(At left "Millee lying on her back 1979, 2006.”) Paired, these images speak about girlhood versus womanhood, about childhood sexuality, and about society’s infantilization of womanly sexuality.