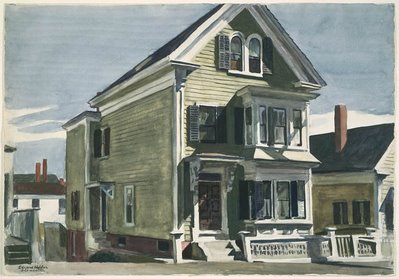 One of the little noted aspects of the Boston Museum of Fine Arts’ programming is its focus on local artists.

A good example is the MFA’s blockbuster Edward Hopper retrospective that opens Sunday. Hopper, a New Yorker, painted at Gloucester in 1912, 1923, 1924, 1926, 1928, 1933 and 1953. And he bought land on which to build a house in Truro in 1933 and summered there most every year for the rest of his life. Hopper’s Massachusetts work is not a sidetrack – I argue that his painting at Gloucester in the summers of 1923 and ’24 defined his mature style, giving it a “Yankee sobriety and austerity. It’s as if Gloucester’s crisp clear North Atlantic light had knocked the fuzzy fussy Frenchness out of him.”

But Hopper is not the only local artist being exhibited at the MFA right now. A mini retrospective of Cambridge artist Michael Mazur’s prints is on view through June 17. “War and Discontent,” on view through Aug. 5, features Bostonian Suara Welitoff and the late Philip Guston, who taught at Boston University from 1973 to ’78. And the recently installed Wein collection includes a painting by longtime South End artist Allan Crite.

The MFA doesn’t tout it, but the evidence shows they quietly love local art. Notice all the different types of shows featuring local artists – single artist survey, historical survey, local artist prize, theme show, etc. This isn’t a token local artist ghetto show, but an example of a major museum consistently integrating locally-made art into its programming and not lowering its standards to do it.

Pictured at top is one of Hopper's Gloucester scenes, “Anderson’s House,” 1926. Below is his "Hills, South Truro," 1930. Both are included in the MFA's Hopper retrospective. 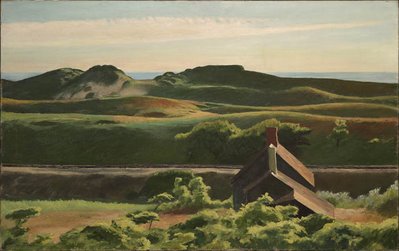