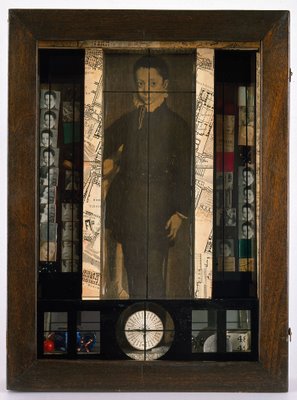 Here’s my review of the terrific exhibit “Joseph Cornell: Navigating the Imagination” at Salem’s Peabody Essex Museum, which assembles 180 of his bewitching, dreamy collages and signature glass-fronted shadow boxes, including 30 works that are being shown for the first time.

Joseph Cornell (1903–1972) was the quintessential odd duck, meek and manipulative, a bookworm and a packrat, afraid of eye contact, scared of his own shadow, a Francophile, and a creepy panting celibate voyeur who idealized girls and mooned over Hollywood starlets and 19th-century ballerinas. He was both a recluse and a pal of art stars like Marcel Duchamp.

Cornell’s boxes, so particularly arranged, tap our mind’s insistence on putting two and two together to create narratives even where none exist. Some correspondences are easily deciphered, but the boxes’ power and pleasure lie in how they never fully give up their mysteries.

Cornell has a slight Massachusetts connection. He was a lifelong New Yorker, except for four years he spent studying – and failing to graduate – at Phillips Academy in Andover.

While the MFA’s Edward Hopper survey has lots of flash, the Cornell retrospective is a quiet stunner. Cornell’s work is rarely seen hereabouts – I think the Addison owns something and maybe Harvard.

These two pages detail some of Cornell’s sources.