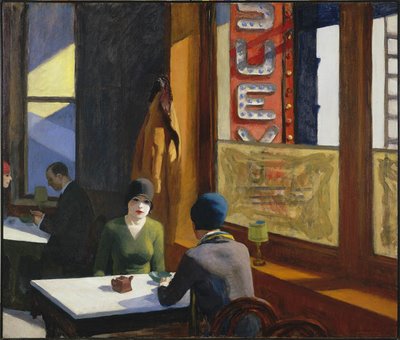 Here’s my review of the Edward Hopper retrospective at Boston’s Museum of Fine Arts. I write:

In Edward Hopper’s world, everyone is lost in an unending rut of office overtime, rattling El trains, cheap fluorescent diners, and bad dates. Everything has fallen tensely quiet. And this anxious, itchy mood haunts even the urban landscapes — perhaps half his work — in which the only person around is you, the viewer. Here every man is an island.

“Edward Hopper,” a career-spanning survey that opens Sunday at the Museum of Fine Arts, reminds us that Hopper has become perhaps the most famous and beloved American artist of the past century by picturing the disquieting film noir isolation lurking at the glass-and-steel heart of our modern metropolises, the frustration of being alone when we’re so damn together.

Their paths kinda sorta crossed when Hopper, struggling to make a living as an illustrator and teacher, taught classes to teens in his mother’s Nyak home in 1915. Gail Levin, who speaks about Hopper at Tufts University at 2 p.m. today, writes in her 1995 book “Edward Hopper: An Intimate Biography”:

The youngest pupil, who was only ten or eleven years old at the time, Elizabeth Cornell (sister of the artist Joseph Cornell) recalled taking the class together with several other girls who were “quite a bit older.” She remembered Hopper as “a tall, serious person,” and “a patient, wonderful teacher who let nothing go by,” and recalled her great disappointment when Hopper, who never could relate to children, told her father that she was too “silly” to continue.

This sums up Hopper, the man, for me. 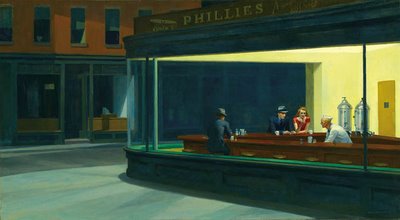