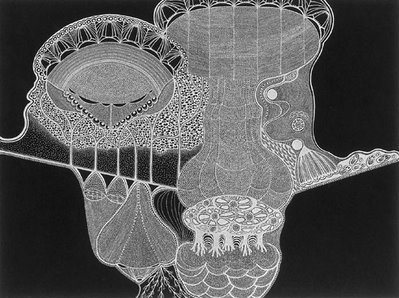 Somervillian Mary O’Malley’s exhibit of recent drawings at Locco Ritoro gallery is called “ultra-beauty” and damn if the show doesn’t live up to its name. 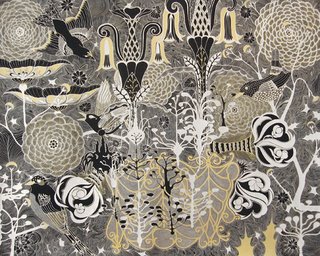 With silver and gold ink on velvety black paper, she creates fantasias of birds and trees and flowers as well as abstract cascades of dots and dashes with flowing thick outlines that look something like mutating jellyfish. 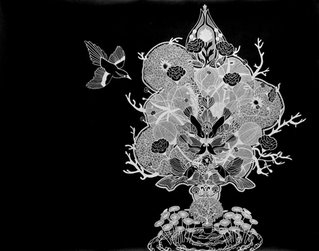 a pink dresser riddled with holes as if attacked by a mad woodpecker and then hung on the wall at head height. It’s lit from within, which gives it a romantic air. Her “Untitled (tall)” from 2006 (below) is a vanity standing about 6 feet tall and leaning precariously forward on the front two of its four spindly legs. It’s a cute special effect that’s made pleasantly strange because the tabletop is angled so that the mirror on the back reflects your face, as if the furniture is oddly, thoughtfully accommodating you. These pieces are rather sedate, but charming.

By the bye: Saint Sebastian, a Roman soldier, didn’t die from being shot full of arrows and left for dead as he’s pictured in so many memorable old master paintings. As the story goes, he was ordered killed because he was a Christian, but the poor bastard survived the arrows, denounced the Roman emperor for his cruelty to Christians and so the emperor had him beaten to death.

I am a huge O'Malley fan too! I was lucky to score a tiny one at the Artist Foundation bake sale. Beautiful stuff.

I enjoyed Brian's work as well (see my most recent post). I recommend Collision as well.