Here’s my review of “Drawing on Hopper” at the Williams College Museum of Art, a show that demonstrates the influence of painter Edward Hopper on photographer Gregory Crewdson. 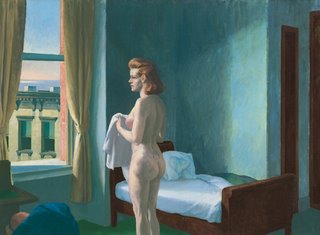 Crewdson admits to many influences, but one he doesn’t usually mention is the late Henry Darger, who is coming to seem a preeminent inspiration for art today.

At first it sounds a bit strange to say this about a Chicago janitor who secretly made giant, wild narrative pictures about little girls with penises fighting the Confederacy – or some such lovely nonsense. (Hmmm, I wonder why he didn’t tell anyone about his art before he died?)

But the outsider artist’s legacy can be seen directly in homages like Paul Chan’s “Happiness (Finally) After 35,000 Years of Civilization – after Henry Darger and Charles Fourier” (2003) (above) in MassMoCA’s “Ahistoric Occasion” through April 22. Chan’s piece is basically a fidgety, pixely digital animation knock-off of Darger.

And Darger’s influence is easily detected in all the high-school-notebook-doodle-style art around these days. See Providence’s C.F.

But it’s not just Darger’s look. He’s also a touchstone for the return of narrative art – especially the growing body of invented (and often inscrutable) personal mythology art. Think Matthew Barney’s epic film allegories about testicles. Or, closer to home, check out Bostonian Ria Brodell’s drawings and paintings of “The Distant Lands” (see one at left), shown at Rhys Gallery last November, in which a toothy whale and a teeny submarine are pals united in some enigmatic conflict involving bird men and mud monsters and worm-bunnies. Part of the fun is trying to puzzle the story out.

It’s here, as an eccentric-narrative artist, that Crewdson fits into the School of Darger.

The rise of the School of Darger indicates a longing for passion, for myth, for hand-made, for color, for hot flashes, for messiness. For all the wonderfully human stuff that has mostly been driven out of the avant-garde art since abstract expressionism.