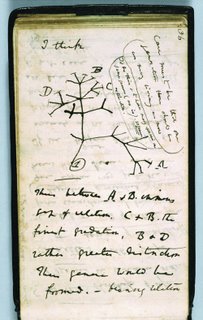 Here’s my review of “Darwin” at Boston’s Museum of Science, in which I claim “the great naturalist’s familiar tale unfolds like a drawing room detective thriller, complete with Darwin’s magnifying glass.”

This isn’t an art show, but with all the sciencey art today it feels relevant. (Montserrat’s current “It’s Alive” exhibit is a good example. Audrey Goldstein’s mad scientist lab contraptions in the MFA’s “Traveling Scholars” show and the sciencey abstraction in the DeCordova Museum's “Big Bang” are additional manifestations.) And there’s this fascinating sketch reproduced at left. As I say in the review:

Of the many Darwin relics here, among the most striking is a tiny notebook from the late 1830s in which he scribbled “I think” and then a diagram of what looks like a bare twig. It’s an early stab at an evolutionary tree. He’s homing in on the big new idea, and the air is electric.