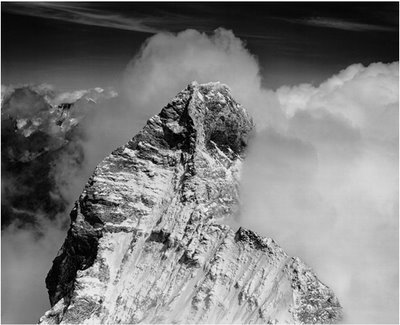 Bradford Washburn’s mom, an amateur photographer, gave him his first camera when he was 13. By age 16, the Cambridge native had scaled New Hampshire’s Mount Washington and Switzerland’s Matterhorn. Somewhere in there these two interests combined, leading him to become a pioneer of high-resolution, large-format aerial landscape photography.

“Colossal,” organized by Waltham’s Panopticon Gallery and now at Boston’s Museum of Science, presents 20 of his breathtaking aerial landscape photographs dating from the 1930s to the ‘70s. He belongs to Boston’s tradition of scientist-artists, including folks like Harold Edgerton, Gyorgy Kepes, Berenice Abbbott, and today Brian Knep. 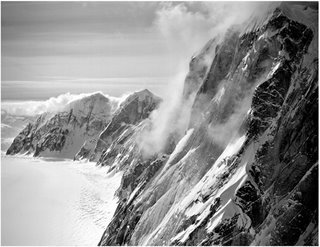 Washburn, who died in Lexington, Massachusetts, on Jan. 10 at age 96, hung out the sides of airplanes clutching gargantuan World War II-era military surveillance cameras as he buzzed over mountain peaks at altitudes of 18,000 feet. The results are elemental vistas of jagged rock and snow wreathed by swirling clouds. Pictured from top to bottom are “Top of the Matterhorn from southwest in western cloudstorm, Switzerland” (Aug. 20, 1958); “Clouds rising after blizzard at the Great Gorge, Alaska” (1978); “South Crillon Glacier and canoe, Alaska” (1934); and “Twilight, Tokositna, Alaska” (1978). They’re awesome in the old sense of the word – wonder and reverence in the face of the unfathomable sublime. 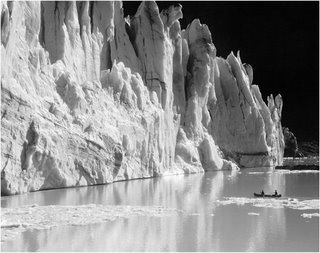 The textures of water, stone, ice and snow are picked out with startling clarity by raking light and shadow in these stark 3-foot by 4-foot black and white digital prints. They echo the photographs of his friend Ansel Adams.

Washburn was founding director of the Museum of Science (he ran the museum for 41 years) as well as a renowned explorer and cartographer, whose adventures took him to the Grand Canyon, the Alps, Mount McKinley and Mount Everest (he lead a survey team in 1999 that used global positioning devices to determine its height was 29,035 feet – 7 feet taller than previously thought). His photos and essays about his travels were published in Life, National Geographic and numerous books 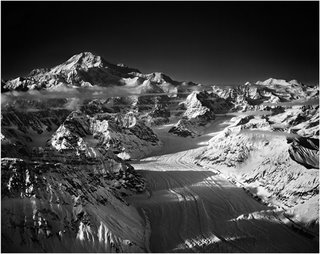 Looking at the photos here, I wonder what global warming has done to Washburn’s ice and glaciers. Turns out Boston photojournalist David Arnold had the same idea and has been following Washburn’s trail. He’s finding that in a generation or two much has melted away.

“Colossal: A Special Exhibit of Bradford Washburn’s Aerial Photographs” at the Museum of Science, Science Park, Boston, Jan. 28 to April 22, 2007.